On Tuesday, the day before his surgery, Bruce and I went to a liquidation sale held by Utah Corrections Industries, which is affiliated with (and right next door to) the Utah State Prison in Bluffdale.   It opened in the morning but we didn’t go until late afternoon on the first of four days.  The only picture I took was the boring building..... 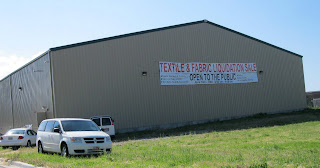 ...but I did find some goodies. 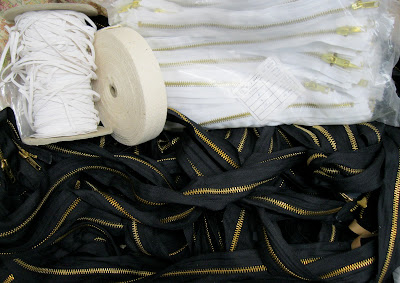 A roll of small elastic (50 cents), a large roll of cotton sewing tape for labels (50 cents), a pack of 100 white metal 7” zippers (to resell for crafts) and a bazillion black metal separating zippers, 27” each.  Hoo-boy! Maureen suggested I look for these, and the idea had occurred to me before, so I took that as a sign.  ;-)  There were pallets and pallets of zippers, but most were small and with plastic teeth.  I know many crafters use the plastic teeth zippers with colored tapes to fashion flowers, but I don`t know how many inches are necessary, and most of them were small. So, I stuck to the basics.

Bruce also found a whole box of rubber feet (used for the bottoms of sports bags, totes, backpacks, etc.). They were sweeping them off the floor and were going to throw them away.  Bruce uses these feet in the radio kits he builds for kids.  They charged him 50 cents for the entire box, which is about what he normally pays for just two of the feet.

Today, Saturday, I hit the motherlode of estate sales.  I found a box of vintage sewing things for $3.00.  Most of the sewing patterns (and there are over 60) are from the Forties and Fifties. OMG.  I had already started listing some of my vintage patterns in my Etsy shop, and this was another “sign” to me that quitting my part-time job as bookkeeper at The Farm in favor of selling on Etsy (and staying home with DH now that he will be retiring in July) is what is in the cards.

And there was the coolest Singer Sewing Course book and materials (fabric and instructions) for six sewing lessons, dated 1954.  All this woman’s samples are there.... oh this is a story in itself for a future post!

Here are some more irises and roses that are blooming in our garden this weekend.  Enjoy! 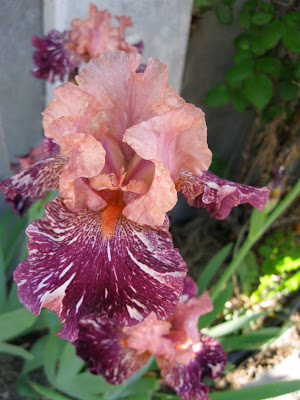 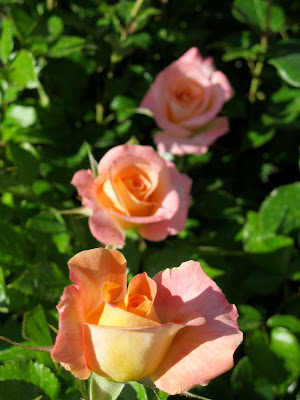 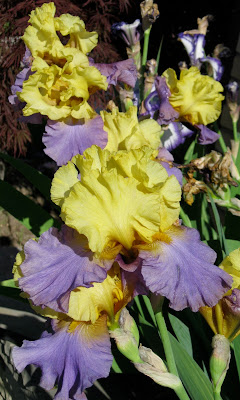 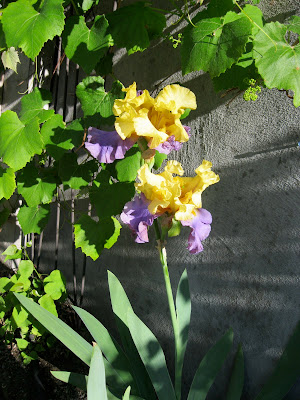 When I first planted the pink rosebush above, I used Miracle Grow and watched it nearly wither away that first spring.  It was sickly, mildew-y and probably in shock.  So, I did what I always do to my roses; just water and ignore them.  The second year it became apparent it would survive, and every year has gotten better.  This is the fourth or fifth year, and it is now a happy camper.  The delphiniums behind it are staked and ready to start blooming soon!


Our third back wall climber is a white rose which always blooms AFTER the pink and red roses are done. 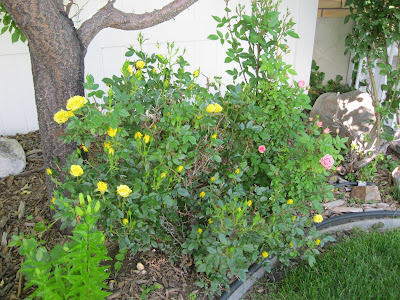 The apricot tree (above) has grown so large, that this fall I will need to replant these two miniature rose bushes, a large red tea rose bush, an Asiatic lily, and my hollyhock.  I will leave the chives and (not visible, but in two spots) and perhaps add some small herbs.  Must do some research first.


The ground cover in this area has done a terrible job (and so have I) of keeping out the grass, so digging it up is another project for this year. I will probably use a landscape cloth and put rocks around the roses here. I’m thinking lower maintenance is the way to go since I am not getting any younger. Not that I haven’t tried, LOL.
Tomorrow, in honor of Father’s Day, I will have some “manly” vintage images for you.  I am hoping they will be a little different than what you usually see.
Have a wonderful weekend!