Last week I was away on vacation in Arizona (more on that in a future post) and missed posting my Happy Thanksgiving message and the vintage graphics I had prepared for you.   So, to all my readers, I hope you had a wonderful day (regardless of whether you observe the U.S. Thanksgiving holiday or not) and made good memories with family and friends.

While on vacation, I did get some stitching time in, although not nearly as much as I had hoped.  It was one of the fastest weeks I’ve ever spent, and it seemed that there was always something happening.   Anyway ... this is the Autumn Round Robin block that I did for Rita.  I loved her colors! 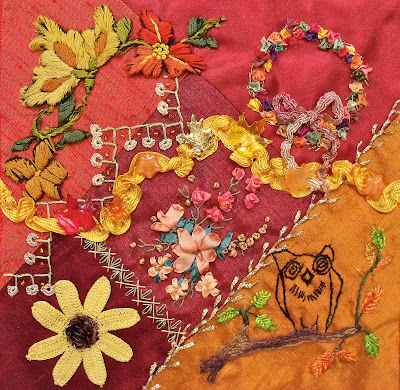 Starting in the upper left, the vintage embroidery came from a large floral piece given to me by a friend at Wheeler Farm.  It was originally on black tulle that shredded whenever it was touched.  So I removed it from the netting and have begun using pieces here and there by simply tacking them on as I did here. 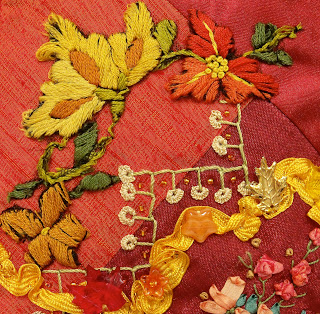 The wreath is made of tiny scraps of leftover silk ribbon bits (some as little as a half inch).  I tacked them on with thread over a circular wreath base stitched with gold Kreinik braid in a feather stitch. 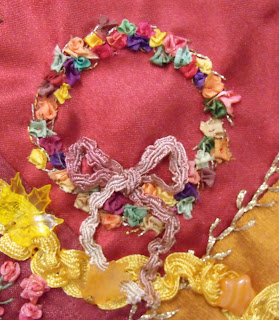 A funky owl on a branch and floral arrangement in the center. 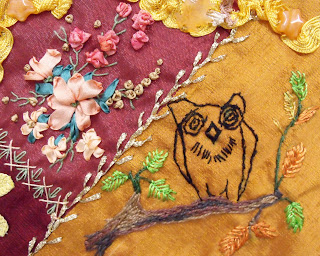 Another vintage snippet; this time it’s a crocheted daisy.  The center is a pre-made sequin and bead flower.   Some basic seam stitching (which was actually done first) completes the block. 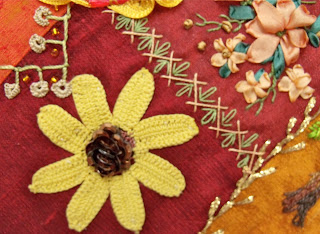 We are taking a round robin break at CQI for the month of December.   Over the past years, we’ve learned that it’s not wise to tempt fate with our blocks when the world is in a Christmas mailing frenzy!  These blocks did get mailed off today (it’s still November, after all!) to the next stitcher, but I will probably be without round robin blocks to stitch on for December.  But that works out great; I plan to finish up the Tea Time wall hanging and do some CQ Christmas ornaments.

I’ve got lots to post over the next several days, so take care and check back soon!

I have been packing and preparing to leave on vacation for a week - to Arizona for Thanksgiving with DH’s family.  We love going down there - and usually do every winter - but this year we missed our annual visit because of Bruce’s back surgery in February.

I’m taking the Tea Time wall hanging along to work on (and finish up!), as well as a block for the Autumn Round Robin I’m in.  And in January I have a couple other round robins starting.  One is a Tea Time DYB (where every participant pieces six 6” blocks, and every person stitches one complete block when it comes their turn).  Anyway, here are my six naked Tea Time blocks. 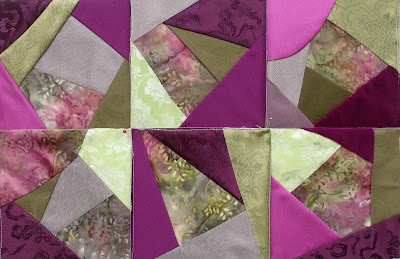 I found the batik cotton while rummaging through my stash.  It became my inspiration piece and stepping stone for the color scheme.  Of course, a lot of the block is covered as it is stitched, but I think it has the potential to be very elegant and different.
So, I’ll be gone for awhile.  In the meantime, Have a Wonderful Thanksgiving!

I don’t know if I’ve ever mentioned this before, but DH works for a company that is into robotics.  He actually started working twenty-something years ago with the University of Utah.  Then that science research department morphed into a private company named Sarcos.   Sarcos did the robotic dinosaurs for Jurassic Park (the ride), and did the fountains at the Bellagio Hotel in Las Vegas (that was actually one of Bruce’s projects).  They’ve done lots of other things as well, of course, including a lot of top secret work for the military.

About three years ago, Sarcos was purchased by Raytheon, and became a satellite company called Raytheon-Sarcos.  As of October first, they were officially absorbed into Raytheon and are now a specialized robotics division of Raytheon. 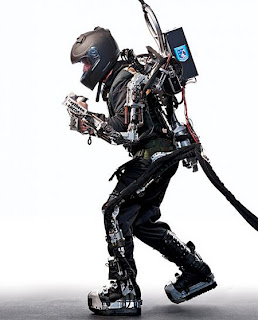 One of the most notable or attention-grabbing projects has been their “real” Iron Man suit.   It’s actually called an exoskeleton, or XOS for short.  You may have read about it in a newspaper (AP and UPI have visited, so has the movie studio from the Iron Man movie, etc.)   They’ve had write-ups in Scientific American and many other magazines.  And now the project has been named as by Time magazine as one of the best 50 inventions of 2010. 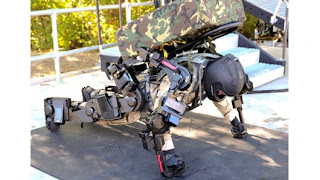 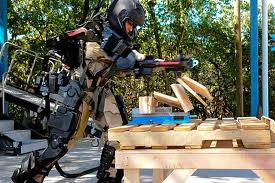 You can also watch a short (and interesting!) video about it here:

And who says geeks aren’t fun?!?

Last night I spent a couple hours (finally) adding new laces to my Etsy shop.  And today I got another notice that one of my laces was featured in another treasury!   This time the treasury is Victorian Roses  and my featured lace is... 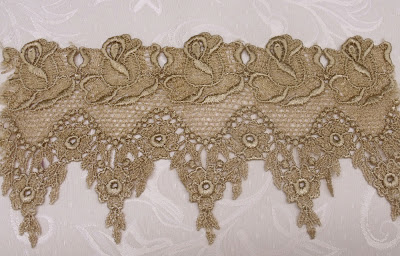 You can view the Treasury (which is a gallery of themed items from different sellers) here:
http://www.etsy.com/treasury/4cddbadda9286d91be26de2b/victorian-rose-gift-guide-for-the

Tonight I begin listing vintage trims in my shop, so check it out in a day or two.  If you are preparing gifties for any of your stitching buddies, the laces and trims could be perfect additions!  I’ve also been putting together fancy fabric packs and hope to begin listing those next week!!

I’m so glad that this weekend for me will not be spent sick in bed like last weekend!  I’m finally getting over that miserable cold.  The silver lining of being sick for a week is that even though I tried very hard to eat all that I am supposed to on my Weight Watchers plan (notice that I don’t call it a diet), I lost 3.4 pounds last week!  And that completes my first full year of WW for a total of 38.6 pounds lost.  I’d like to lose another 30 to get to goal, which is set at the top end of my weight/height range.   My goal is to become an instructor at our WW in Salt Lake.  And THEN I’ll drop another 10-12 more for a “cushion”, LOL.

I found out just today that some of my golden lace was included in an Etsy Treasury yesterday.  “Random Acts of Class” featured a rose-themed hand-dyed venice lace motif.  Woo-hoo! 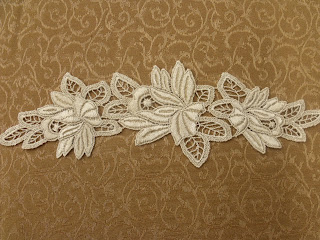 Must get back to photographing more stuff to list....

I’ve been madly stitching on this block for Gerry in our Art Nouveau round robin for Crazy Quilting International.   But I was sick with a bad cold (wah, wah) and spent most of the weekend in bed and asleep.   Why is it that I don’t get sick during the week when I can miss work?  LOL.  But I digress ...
As I mentioned in the last post, Gerry wanted us to do representations of Art Nouveau tiles for her blocks.  And since she loves daffodils, that was my choice.   There were no shortage of daffodil images to chose from, but this was my hands-down favorite.   So I downloaded it, printed it to scale and traced it onto the block with a water soluble pen.  The pen was from Clover, and it worked great and cleaned up easily.  Naturally, I tested it first. 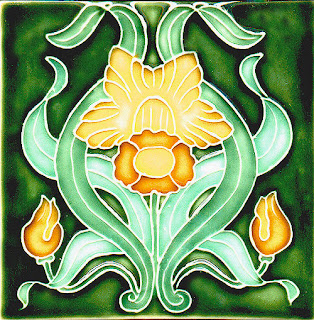 I simplified the image and decided that the leaves in the back would be darker and satin stitched.  The front leaves were chain stitched.  YIKES.  In just looking at this, I see that I forgot to stitch the stem going up to the flower!  Hmmm...  Luckily, that’s a quick fix before I send the block home to Gerry tomorrow. 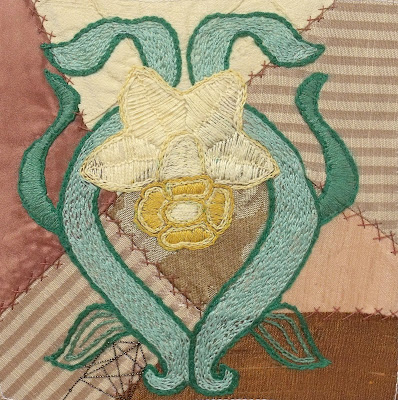 To the seams I added just some subtle herringbone stitching.  It is, after all, a crazy quilt block.  And in a further nod to CQ, I added a little spider web in the lower left.  As usual in my stitching, the spider has left the building!  ;-) 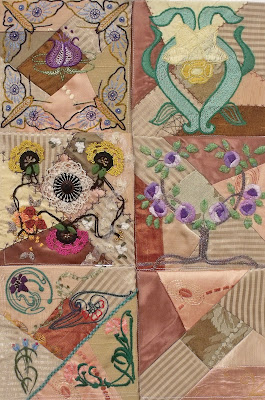 These are the six blocks (five finished) that will wing their way home to Gerry tomorrow.  She will get to finish the last one and decide how she wants to use them.   That completes this round robin for me, but I’ve got an Autumn DYB starting, a Teacups DYB,  as well as a Steampunk-themed round robin and finally a “For the Birds” DYB.  It was all I could do to resist the English Garden DYB, but I had to draw the line somewhere!  I’ve got my blue and pink Teatime wall hanging to finish up this week.
I’ve also added a few new things to my Etsy shop, and will continue that over the next several days.  And on Ebay (under the username “Crazybydesign”), I’ve been selling vintage fabrics, laces, ornaments.  I’ll be listing more there this week, too.   Have to earn my way to Connecticut in April for the CQ Adventure!
Hugs,

Autumn Blocks and Other Project Progress

Just a quick post to show you the blocks I posted for the Autumn II Round Robin (it’s a DYB or “Do Your Own Block” where each participant completes a 6” block for the others).  These are my six naked blocks: 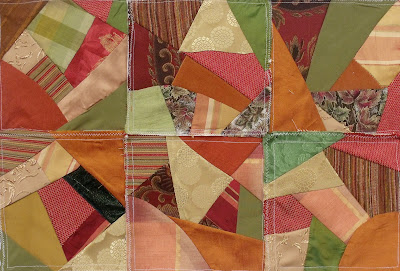 The Tea Time wall hanging is on hold until later in the week.  But here are a couple details that I finished over the weekend.   Below is some ribbon embroidery around the teapot image.  I  still need to do some sort of stitching along the basted edge. 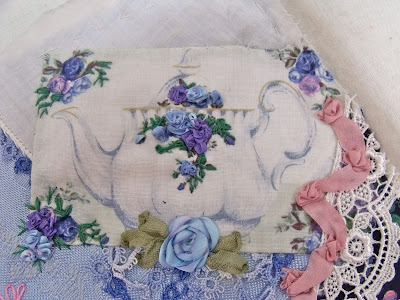 This is a vintage crocheted piece, probably meant to be an insert on to a pillowcase.  I laced it with edge-dyed silk ribbon, and used it to cover an awkward area with too much busy-ness in the way of bright images and strange seamlines. 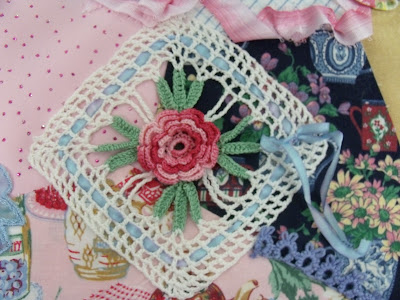 Finally, below are Gerry K’s blocks for the Art Nouveau RR, which is about finished.  In fact, I’ll be the last one to stitch, and the block I’ve chosen (one of only two left unstitched) is in the upper left. 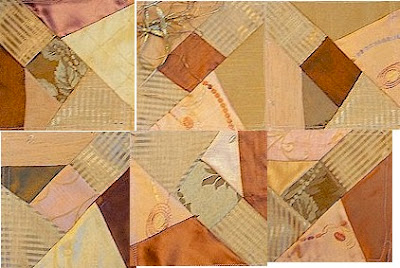 Gerry loves Art Nouveau and requested that we do some sort of representation of the old vintage Art Nouveau tiles (if you Google “Art Nouveau Tiles”, you’ll see a plethora of beautiful images).  Since I know that Gerry loves daffodils, and there are lots of good daffodil tile images to adapt, AND the colorations would look good with her block colors, that is what I have set out to do.  Stay tuned to see how that works out.  The good news is that if I flub it up, I’ve got most of her fabrics in my stash! (we share alot!!).
Hugs,