Today I completed my work on my friend Cobi's Crazily Cream block for our round robin in Crazy Quilting International. She requested an encrusted (very busy and full) style and lots of lace. Yum! I knew that was going to be fun, and I was right. It is so relaxing working in a neutral, tone-on-tone palette. Texture is the key! It was hard to stop after my allotted one-fourth of the block. 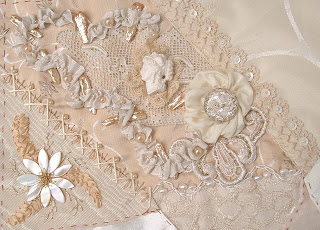 The "daisy" is made from shell beads in a leaf or marquis shape. The center is Kreinik gold cord french knots. I rouched some vintage rayon and tacked pearl sticks below it and seed pears on it in a random fashion. The lace along the left seam (with sequins) is a rick-rack lace. Allie, are you reading this? I know you love rick-rack lace! (Send me your addy, OK? I've had some sitting here for awhile for you!)

I think I may need to fix that yo-yo flower though. It looks wonky and the button is too big. Will fix it before I mail it off to the next person tomorrow. G'night!

On Saturday night, we had a close call. Both floods and fires are among a stitcher's worst nightmares. But looking back now, I know how lucky we were.

I was sitting in my studio, stitching on a block. I heard some water running, and thought DH had just flushed a toilet upstairs. He came downstairs and the water kept running. And running. After a few minutes, I called to him and we both went upstairs and checked the bathrooms. Everything upstairs was quiet - no toilets or faucets running. When we came downstairs, however, the sound was very clear AND the carpet near the east wall in my studio, which is situated between the doors to the laundry room and to the bathroom, was wet. 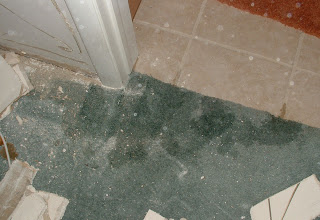 There was no water running in the laundry room or downstairs bathroom, but we could now feel it in the wall. Bruce ran and shut off the main water valve and the sound stopped. OK, that's good. Now to find the leak. We moved away my bookcase full of cotton fabrics that stood along that wall. Next, we tore off the paneling, ceiling molding and began cutting into the sheetrock. We finally saw a water pipe up near the ceiling. 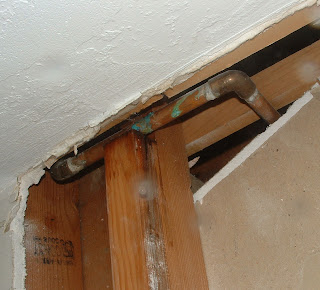 What we found was a copper pipe that had apparently been nicked many years ago when the basement was finished (the house is 45 years old, but the original basement finish may be 10 years newer than that). It appears that a nail in the crown molding grazed - didn't pierce, just grazed - the pipe. However, over the years it corroded. It had been leaking for awhile, but finally burst last night. THANK GOODNESS WE WERE HOME AND RIGHT THERE WHEN IT HAPPENED!

We ended up tearing out the entire panel of sheetrock between the doors. 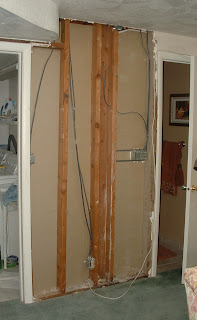 Bruce went to the hardware store and bought a clamp as a temporary measure until we can call a plumber on Monday. As an extra precaution we shut off the water when we went to bed.

Now we'll pay for a plumber, get the wall sheetrocked - and while we're sheetrocking, we might as well fix the ceiling in the laundry room and take the vent out of the hall ceiling upstairs (since we've had central air for years) and have that sheetrocked too.

So tomorrow I'll find temporary storage for all the fabrics that had to be moved. And then I get to dust every little inch of my studio to remove the settled sheetrock dust. And cross my fingers that we can get a plumber in ASAP.

As Gilda Radner used to say, "It's always something!"

It's been awhile since I posted, and it's been eating at me. Lately it seems that I'm just wandering around without much focus. The issue, actually, is that I'm like a kid in a candy store - I can't seem to make decisions. I love everything I do and cannot possibly accomplish everything I want to in a day. Or two. Or a week......

First, there are my stitching projects. I've had three round robin blocks to finish (one I did and the picture is posted below), each requiring a mountain of threads, beads, ribbons, laces, and other doo-dads that I surround myself with. I've got other projects, too, and I want to work on them all simultaneously. Then the garden is producing such lovely carrots, potatoes, corn and tomatoes. Harvest, clean, store or eat. Yum! Summer camp at Wheeler Farm (where I'm a COWnselor) is winding down, so I've been really putting together some fun projects last week and this week for Arts & Crafts. I hope to get some pictures in the next day or two, but I'll have to get permissions lined up to post them. And I'm already getting teary-eyed several times a day just thinking about not seeing some of these kids whom I've really become attached to!

And then all the linens & things I've bought lately at estate sales. Goodness...... I bought more than a dozen pairs of embroidered pillowcases and have sold many of them on Ebay. Made up my initial investment with one sale! Must weed out some of my laces and hankies, too! Last but not least is the job situation. I was contacted by a local building supply firm for a credit position. I've interviewed and it went well - just waiting to hear back. And I'm torn. On one hand, going back to work full-time would be great for the money, but am I ready to commit 9+ hours per day? I can also stay at the Farm and work in the office for 4 hours a day (plus possibly pick up some shifts at Barnes & Noble, another place I'd LOVE to work).... My heart is at the Farm. I guess this will all play out.

Below is the picture of my Fabulous Fans Block for Gerry, who chose a Moulin Rouge theme and colors. It' s very wild and flamboyant! (By the way, if you haven't checked out her blog and website, please do! She's such an amazing woman and an incredible talent!) 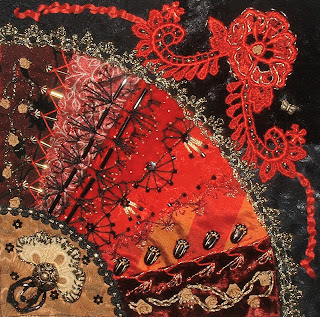 Blogs to Check Out - and Weekend Ramblings

I haven't done this before, but I probably ought to every now and then. That is, recommend a new blog or two that I've run across. I'm learning as a new blogger (three months or so....) that we all explore others' blogs and links and find those that "feel" right or fit our interests. With that in mind, let me tell you of some of the delightful ones that I enjoy. And this is beyond the "goes-without saying" blogs of Allie, Sharon, Pat and Lilla!!

Another of my favorites is Across the Pond Although Mary was born in England, she has spent the last several decades in the southeast US. Her sensibilities and visual flair for her decorating and garden, though, is definitely European. And she's a great photographer to boot. It was through her blog that I learned about (and plan to find out more about and participate in) Pink Saturday.

Pink Saturday is the brainchild of Beverly at How Sweet the Sound. Rather than say any more about it, I urge you to explore her site!.

I went shopping yesterday at two antique stores for something yummy pink to post for Pink Saturday. But I was feeling "blue" because DH has been working 11 hour days for almost three weeks STRAIGHT. I didn't find anything pink OR blue (but I found a cute pair of yellow salt & pepper shakers that match a pair I've had since I was a child)...... The good news is that DH's project (for the government) is now complete, and he has the next week off as comp time. It will be a good week.
Posted by Cathy at 5:50 PM 4 comments:

It's August and it's hot in the Salt Lake Valley. Thankfully, unlike week before last, it is NOT humid. I hate humidity! It's so much easier to deal with 100 degrees and 15% humidity than it is to deal with 80 degrees and 50% humidity. But enough of that........... The garden is perpetually thirsty, but our grass, trees and lovely flowers must stick to a strict watering schedule; we are, after all, a mountain desert. We always make our lawn go quite thirsty at the beginning of the season in order to develop its deep roots. That way, we can go longer between waterings the rest of the season. So this morning, before it got too hot, I took a stroll around the front yard and snapped a few pictures. It's the time of year for the daylilies and coneflowers to be blooming. The dwarf Japanese maple turns from red to green. The Asiatic lily beyond the coneflowers has already bloomed. The delphiniums are spent (must trim!), but the goldenrod is going nuts. These are the lazy days - the dog days of August, I guess - when it's hard to motivate myself to get out in the yard because of the heat. But I did spend a half hour out in the front weeding yesterday, and another half hour in the back today, so I'm not totally hopeless!
Posted by Cathy at 11:36 PM 2 comments:

You may or may not be aware that Dr. Randy Pausch died on July 25th. He has been featured on numerous television shows and magazines. His most notable lecture was entitled "Really Achieving Your Childhood Dreams" but has been dubbed "The Last Lecture". It was given last September at Carnegie-Mellon University, where he announced the recurrence of his pancreatic cancer. In the face of certain death, he refused to feel sorry for himself or to be an object of pity. Rather, he felt it was important to share the life lessons he's learned from his family. The lecture, he said, is for his children.

On his website, linked above, you can watch the full hour-plus lecture, or you can see a reprise of The Last Lecture he gave on the Oprah Winfrey show here (an approximate 10 minute version). It moves me to tears whenever I watch it.

He was a truly good man and lived an honorable life. He will be missed.
Posted by Cathy at 3:28 PM 1 comment: