This is the final block that I worked on for the Flower Fairies DYB Round Robin at Crazy Quilting International.    It belongs to Cobi in the Netherlands, and she asked for meandering vines on the block, plus roses - in addition to any theme flowers we wanted to add. 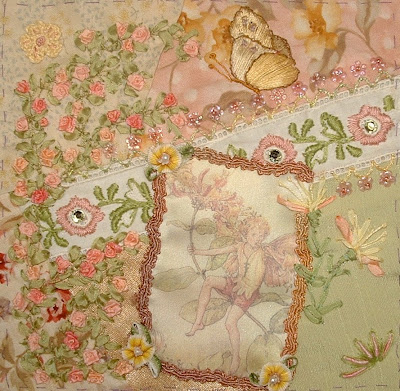 This block is the Honeysuckle Fairy.  I added a silk-ribbon stitched Honeysuckle to the right of the printed picture.  I embroidered the white lace to color it, as the other ladies in the RR had done the same.  The butterfly at the top was stitched with Eterna silk.  This block was a fun one to work on!  Now, I just get to wait until my blocks return home.

I was born and raised in Southern California and grew up loving the beach.  Although I've lived in Utah for over 25 years now and love the majestic mountains that flank the Salt Lake Valley, I will always have a bit of the sea in me.

My parents lived in Port Hueneme (prounounced "Wy-NEE-me") in Ventura County and owned a large working boat.  Their business was named

Seashore Recovery, and along with the Coast Guard (whose primary goal was to save lives), they worked with insurance companies to save vessels all up and down the Southern California coast (my step-dad was a captain).   Sometimes they'd take a day trip on the ocean to fish, other times they'd find some quiet cove in the nearby Channel Islands, drop anchor, and stay for a few days.

Their home was very sea-themed, as you would expect.  They lived less than a mile from the ocean.  I loved visiting their light and airy condo.  When they passed away,  my brother and I saved all the family heirlooms, of course, but we also cherished the nautical items they'd collected together.  When DH & I remodeled our three bathrooms in 2008, the master bath became my seashore bathroom, in the colors that my mother loved; light green and light blue.   The southern-facing window in the bathroom was replaced, but now it needs a valance.

At Crazy Quilting International, a Yahoo group for crazy quilters from all over the world, we are having a 2010 Challenge.  It consists of a new technique or theme for every month, and some of us want to combine some or most of the techniques on a single piece.  So, I decided to do a valance in a seashore theme for my Challenge piece.  The January challenge was curved piecing and fans, so I included those in this project. 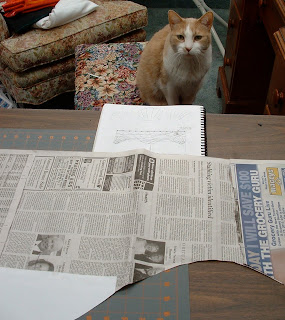 The first thing I did was measure the bathroom window.  I played around with some design ideas in my sketchbook.  I knew I wanted a valance that would hang from tabs on the top (tabs can be added on after the the CQ'ing is done, at the final construction stage), that would have a wavy bottom to lend a sea-feel, and I wanted to incorporate fans in the piecing. 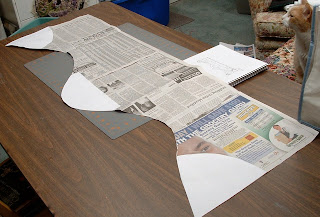 Once I had a rough design down, I taped together several sections of newsprint and made a rough pattern.  I left the curves off the newsprint, and was able to experiment with plain paper additions to get the proportions right. 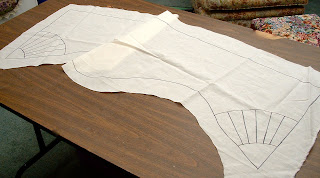 From this point it was easy to trace the outline onto muslin.  For the fans, I just used rulers and curved edges to mark even blades.  I used a Sharpie permanent marker, and as you can see, the design shows through on the back.   That was done intentionally, to help with the fan piecing. 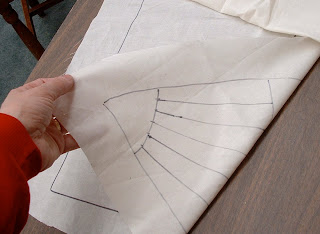 But first, I added a "sandy beach" section in the upper right.  I have to have some California gulls or a pelican in there somewhere, don't you think??  For this area I used the flip-and-sew method, except for the large corner curve. 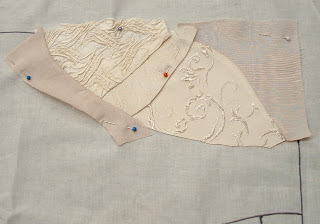 This is my fan-piecing method, which I learned from the one and only Betty Pillsbury.  I'm not sure if she originated this method or not, but regardless, it's a great way to assure even blades.  First I selected the fabric for the first blade (in this case a silk that I had to interface), and cut out a blade that was larger than I knew I'd need.  Better safe than sorry! 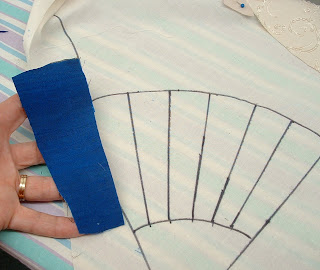 You'll see below that I've flipped it over (that's the interfacing you see) and lined up the right edge of the fabric with the left edge of the pattern, overlapping by approximately 1/4".   Pin it there.  You can't see where to stitch, can you, because the fabric covers the line. 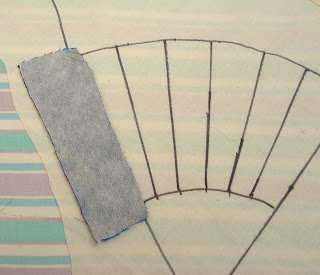 So.... that's when you turn it over (remember, you've pinned it) and stitch along the line from the back.  Pretty clever, eh? 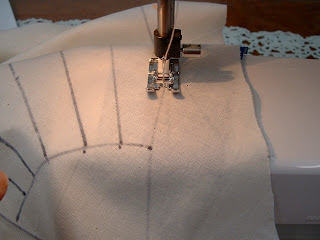 Then turn it back over and press.  First press it on the wrong side, then flip it so the right side shows and press it again.  It'll give you a much cleaner line. 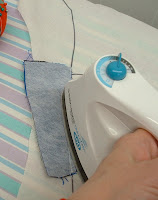 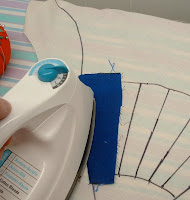 And so I continued this way until both fans were done.  The pins below are just for the picture; I don't usually pin these on the seamline where they'll be sewn, LOL! 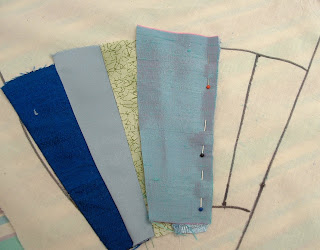 After the "beach" and fans were completed,  I switched to fusing my pieces  This enabled me to have greater control over the shapes of the pieces, as i wanted to have a lot of curves, which typically show movement for the "ocean".  So, I'd cut a few pieces, experiment with their placement, then add fusible webbing (I used Heat & Bond, light and sewable).  Once in place, I'd fuse them to the muslin. 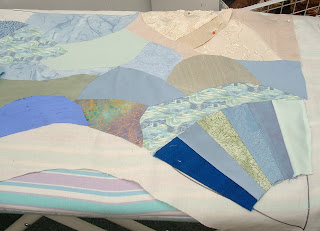 I tried to maintain a minimal overlap of pieces only.  Some of the slinky fabrics tend to show everything underneath (which is why these probably came from a thrift store - there's not a slinky ANYTHING in my own wardrobe for that very reason!  LOL).   But seam treatments will cover any irregularities. 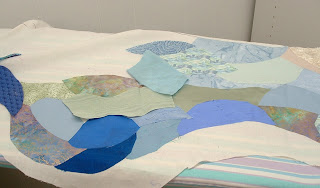 I placed the darker fabrics along or near the bottom edges to give a feel of deeper waters toward the bottom.

Close-up of Left Side 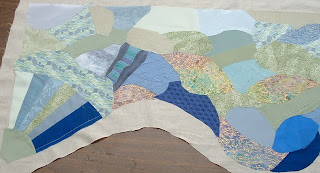 Close-up of Right Side 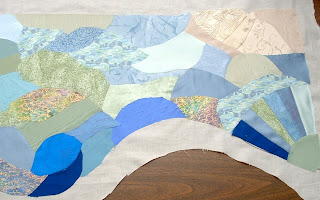 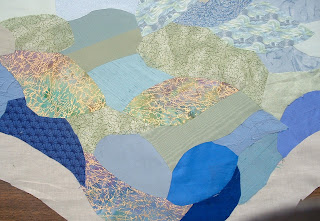 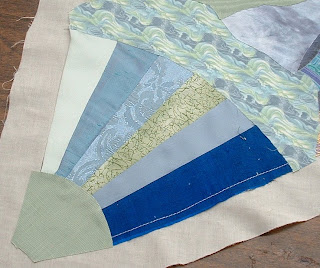 So..... that's what I've been working on for the last couple weeks.

Oh wow!  Our dear Queen of Crazy Quilting, Betty Pillsbury, has teamed up with Beekman 1802 to make available some of her hand-stitched postcards.  Check them out here. The cards can be personalized and mailed by Beekman as a special Valentine to your loved one.  Or to yourself, which is what I'd do, because who wouldn't want a piece of Betty's work?!?!

No, I have no affiliation in this brilliant opportunity, but I had to share this.  After all, I am the Unofficial President of Betty Pillsbury's fan club, LOL!!

Last fall, I posted about Wheeler Farm being in contention for a Hampton Inn Landmark grant for 2010.  Along with lots of worthy competitors, Wheeler Historic Farm vied for the most votes.  Well, we got word recently that we WON!!!    View Hampton Inn's information here


We've heard that this grant is typically for an amount in the six-figure range, and at the top of the list is a new roof and other renovations of the Historic Farmhouse.   The County of Salt Lake, owners of the Wheeler Property (which is part of the Parks & Recreation Department) is in no fiscal condition to put any money toward maintaining this lovely structure (in fact, they just cut salaries across the board by 2.75%).  Nor is the Farm typically paid much attention to even in the good times.  So this money will be very welcome. 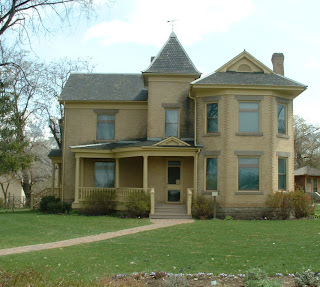 I'd like to thank everyone who took the time to vote (especially you, Bev!).   This will really be a change that will positively touch many lives.  You are the BEST!!