I am having a surprising amount of fun and enjoyment with this round robin!   Victorian is such a fun theme to do, with the frills and flowers and such. Oh, and lace of course.

Lisa did all her blocks in pastels, and I selected this one to work on.

First I trimmed the center silk print with vintage tatting and a gold trim. Then I decided we needed lace in the top area.  :-)  And of course, flowers to coordinate with and echo the other colors in the block; pink roses and yellow whateverflowers.

Then I added some fancy seam stitching, a lace fan, some beads and called it done.  :-) Lisa, I hope you like it!


And this is off in the mail to Hideko in Japan. Just squeezed in the mailing before we halt for the crazy mail month of December.  But that`s alright; it’s not like I don’t have anything to work on!!

Finally back!  I had to buy more storage space from Google to get blogging again. And I understand that happened to a lot of you, too.  I won’t go in to the circles and wild goose chases Google led me on in hopes of maintaining the status quo. Ended up paying more than I wanted to because I am also an administrator of the Crazy Quilting International blog, so those pictures count toward my allowed quota. (I wonder if they count against EVERY administrator? That certainly wouldn’t be fair. . . ) But I digress….

Did you have a nice Thanksgiving?  We did, but I forgot to take pictures. And if I don’t, it seems that no one else will!!  The grandkids were all here for Fiesta, which is our Mexican food celebration on the Saturday AFTER Thanksgiving.  It’s much better not to have to fight the ex-spouses and the in-laws for our turn with our grown kids and their families.

Now, down to business.  A couple years ago I bought a decrepit footstool at the thrift store for $5.  If you are like me, you see all sorts of potential in this bad boy:


After:  3 Coats of white paint, new fabric, padding and rotted top board replaced. 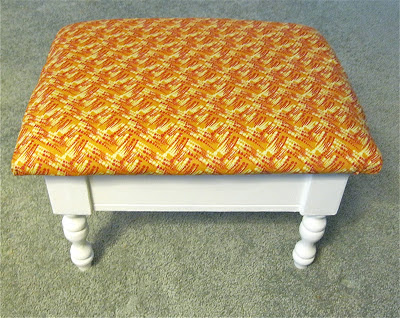 The fabric I used is a print from the “Indie” line by Pat Bravo for Free Spirit Fabrics. It only took a fat quarter.  But because it was not of home dec weight, I did use an iron-on interfacing to give it some sturdiness.  I purchased a foam remnant on sale at JoAnn’s for cheap.  The inside fabric was an old piece of batik I had that coordinated nicely with the cover fabric.  DH decided the top piece of chipboard was too rotten to use, so we replaced it with a piece of wood left over from several years ago when we re-did our patio chairs (no picture).

The original hardware was reused, and I added some little felt pads to the bottoms of the feet.  It was a cute re-do for cheap.

I also re-finished a mahogany doll bed (you can see part of the “before” in the second picture above).  This will be for London when done; I have to do some paint touch-up still. But the little doll quilt and pillow for it are done. I will save that for another post.  :-)

I’ve also finished another quilt and done some CQ stitching to share.

SALE in My Etsy Shop

Hi Everyone!  Just wanted to drop by and let you know that I am having a sale in my Etsy Shop (see link in the sidebar) for 10 percent off everything in the store (except clearance items).  So if you're tired of fighting the shopping crowds already, or want to stock up on some lace, trims, vintage patterns or fifties, why not drop by?

Use Coupon Code:  Holiday2012
(Type it in the box provided during checkout)

About two or three weeks ago I finished another quilt for the grandkids for Christmas. This is the second (and final) quilt for the toddler boys. It will be given to Bruce`s grandson Deacon (4 ½ years old).  He loves the planets, moon, solar system, etc. He even has a glow-in-the dark moon in his bedroom.

This quilt measures 54 x 56”, if I remember correctly. The pattern was supposed to be square, but I have a thing about square quilts (I think they’re dumb), so I lengthened it by a couple inches.


The center circle is appliqued onto the four colored blocks. I had planned to just piece the curves, and the pattern called for reverse applique, but I ended up just doing it this way. Actually, after the color blocks, I just pretty much did what I wanted and disregarded the pattern altogether. 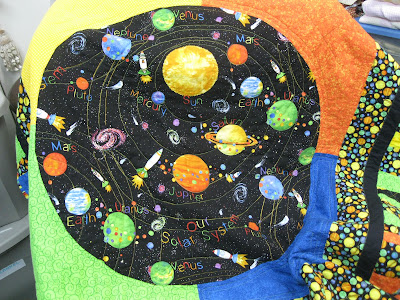 The two planetary fabrics and the binding stripe are from the same line; the rest is stuff from my stash. The center was quilted along those orbit lines in the print. I did some outlining in the color blocks with a few other lines and angles thrown in. The borders were free-motioned, and I even stitched Deacon’s name (see below). 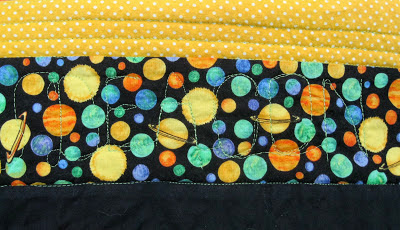 The back side is Minky, and I think the planets and orbits stitching looks cool on it. But then, it doesn’t take much to excite me! 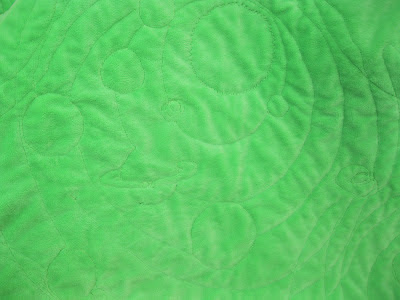 I have been working on London`s quilt, which will just be some basic strip piecing. But I hate it. Well, I hate a couple of the prints in it and need to do some frogging (rippit, rippit). 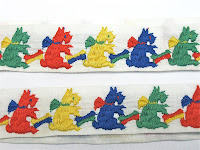 My focus for the rest of this week is getting things photographed and listed in my Etsy shop. I have hundreds of vintage sewing patterns that are pushing me out of my studio and storage, so expect to see lots more of those in the next couple months. And I have lots of vintage fabric and linens that I have finally begun taking pictures of for listing.  And vintage sheets - binsful! They`re all washed and color sorted and waiting to be cut up, photographed and listed. And lots and lots of vintage trims…..Oh my. If I could just have a solid 60 hour week of doing nothing but working on my Etsy (or if I had some help!!), I could make a dent in this stuff!!

But next week I get back to sewing quilts (London`s and two others to finish), plus a Christmas quilt I want to do. And then two crazy quilted Christmas stockings, four makeup zip bags and five clasp purses. Easy Peasy. HA!!!

Where are those darn elves when you need them?!?

I Love Paris Round Robin

I’m participating in a Paris-themed round robin with some ladies of Crazy Quilting International.  I’ve wanted to do this theme in a round robin ever since I created my “I Love Paris” purse.

Darlene’s sent her block to me, and as I was first in the rotation, I got to pick and choose where I wanted to work on her block, keeping in mind that I was responsible for approximately 25% of the embellishment.

I had an idea that I have been wanting to try for a long time, and so I first began by roughing it out in my sketchbook. 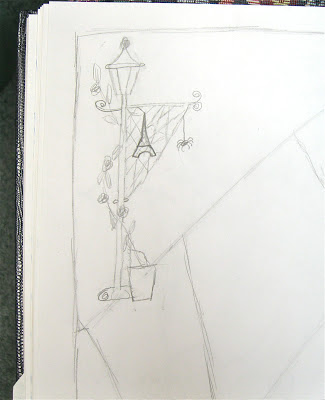 Then on the block itself, I basted some basic lines to sort of block out the design in situ and get a feel for the scale and the materials (threads) I would need to use. 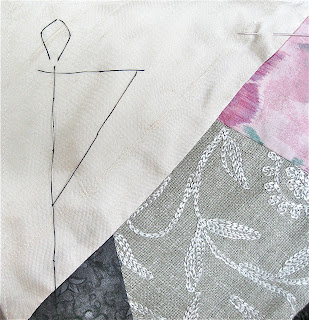 From there, it was pretty much just straight stitching.  I did the lightpole first, in two strands of DMC cotton (black) and also two strands of Eterna silk (gray).  Stitches used were primarily the stem stitch and then satin stitch and/or wrapped chain for filling. 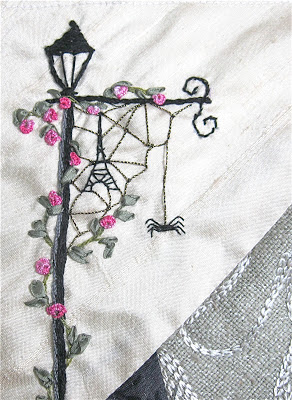 Then I stitched the Eiffel Tower in one strand of silk, and the rest of the web around it (not even trying to make it a realistic web!) with DMC Fil or chine’ Noir (made in France, naturally, hehe).  The spider body was a bullion and her legs were one strand of cotton. A stem-stitched vine winds up the pole and some variegated pink (size 8 silk perle) cast-on blooms make it a bit festive. 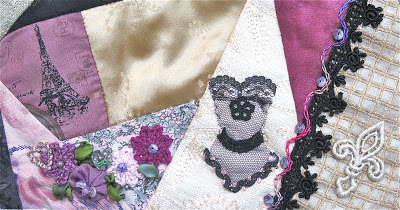 Along the bottom area of the block I added a “corset” of cotton, tulle, lace and trims, a fleur de lis of lace from my Etsy shop, some embellished black venice lace, and a small grouping of flowers, leaves and a pink rhinestone heart. 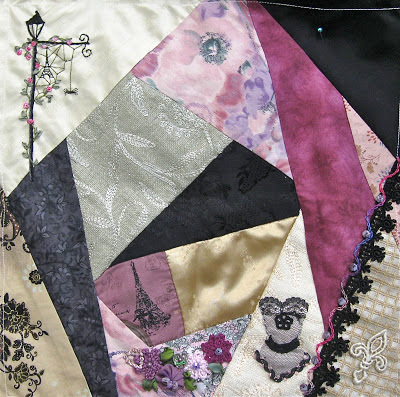 So this travels on to the next person.  I left the area to the right of the light pole open, thinking that maybe one of the next ladies would like to add a bistro table and chairs, a bicycle with a flower basket, or some such thing to expand the vignette.

I also finished another Christmas quilt for one of my grandsons a couple weeks ago and will get those pictures posted in a day or two!