Back in the Saddle (Yet Again)

It has been a loooooong, eventful Holiday season, and I think I am finally recovered. Just so much to do.  I have learned that being the owner/moderator of Crazy Quilting International, a Yahoo group - very active - with over 800 members in almost 3 dozen countries -  takes time. That rather surprised me (duh!), but I had been a moderator (not the owner/“Momma”) of the group for years.  Sure, if I set myself out special tasks, they are going to take time, but I didn’t anticipate all the emails (which I love, BTW)  and other mini-crises that happen and need attending to. I have four other great moderators - Berta Partridge, Sharon Boggon, Gerry Hookstra and Wilma Van Wagensveld.  But sometimes the buck stops with me. And then we had our 2014 Retreat Registrations, which filled up in 2 days (I was handling those deposits).  I will post more info about that here later because we are also going to have a Visitors Day where others can come for a single day.  In a nutshell: Kansas City, September 2014.  I will also be sharing some other CQI stuff here as well as on the CQI Blog.

Anyway, I have been blogging and writing to all of you ‘in my head’ for weeks, with full intentions of keeping my blog going and up to date. Eventually, that is.  :-)  I think I am ready to finally show some of the pictures of my son’s wedding last June, plus pictures of our cruise to the Bahamas and my visit with my dear friends Carol and Woody K in Florida.  But that will be in a post or two. 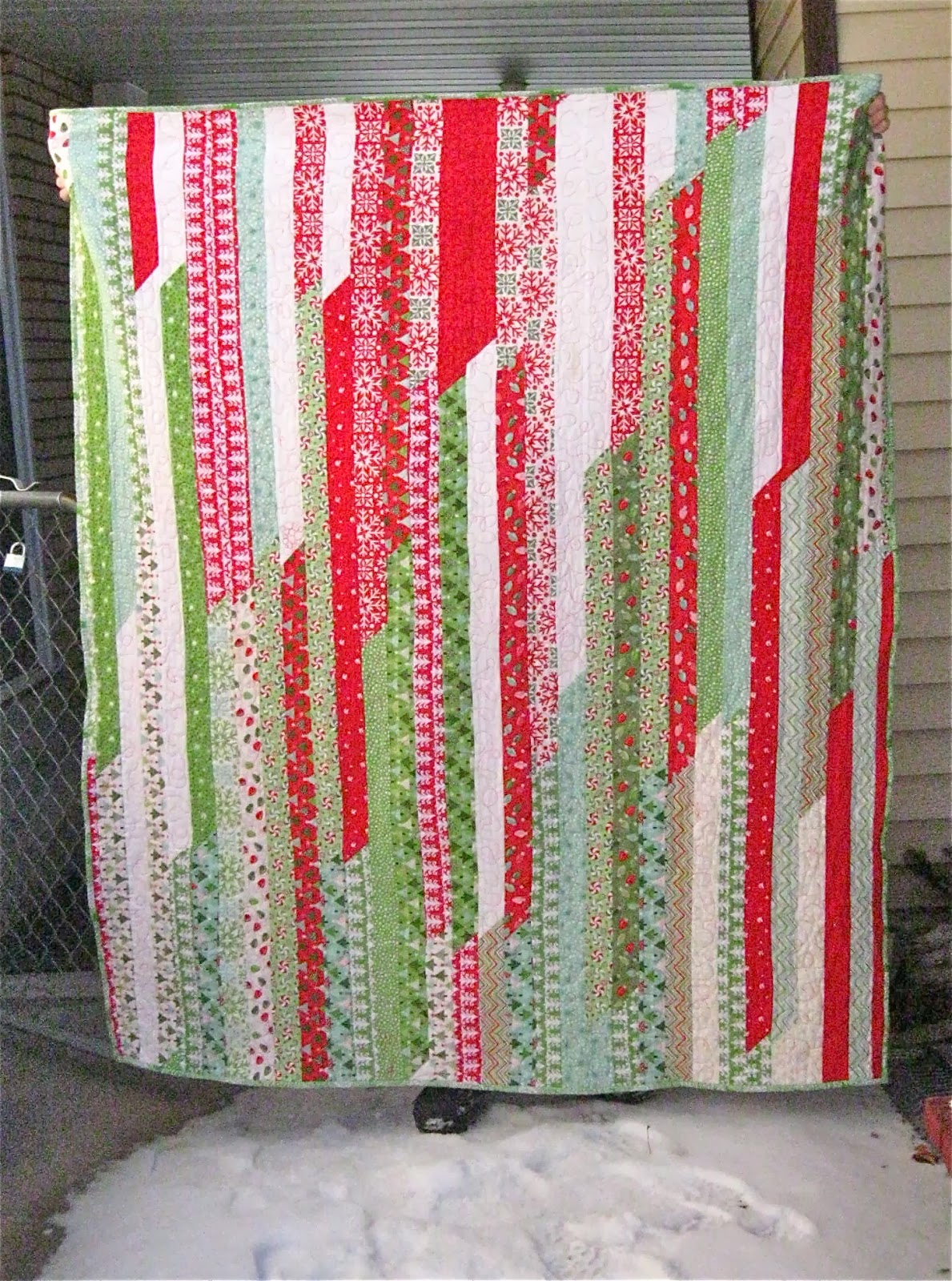 First, I want to show you a quilt finish (a sane quilt, not a crazy quilt) that I did in December.  I had pieced this easy strippy mile-a-minute quilt top last year after Christmas and then put it away. The fabric is Kate Spain’s Joy for Moda, with a few other strips added in here and there.

I had the backing fabric (red Minkee), batting and binding,  so all I had to do after Thanksgiving was whip it out, baste it together and quilt it.  The quilting process was a freemotion nightmare with my old Husqvarna machine (about 15 years old). It has  been an OK machine most of the time for basic sewing and CQ piecing, but has always had tension issues.

Let me tell you, I was soooooo ready to pick up my new Bernina out of Layaway in December.  This was the last quilt  I was ever going to quilt on a less than stellar machine!!  And since it was going to be just for me to cuddle up in during the winter, I played around and experimented with the quilting on this quilt. 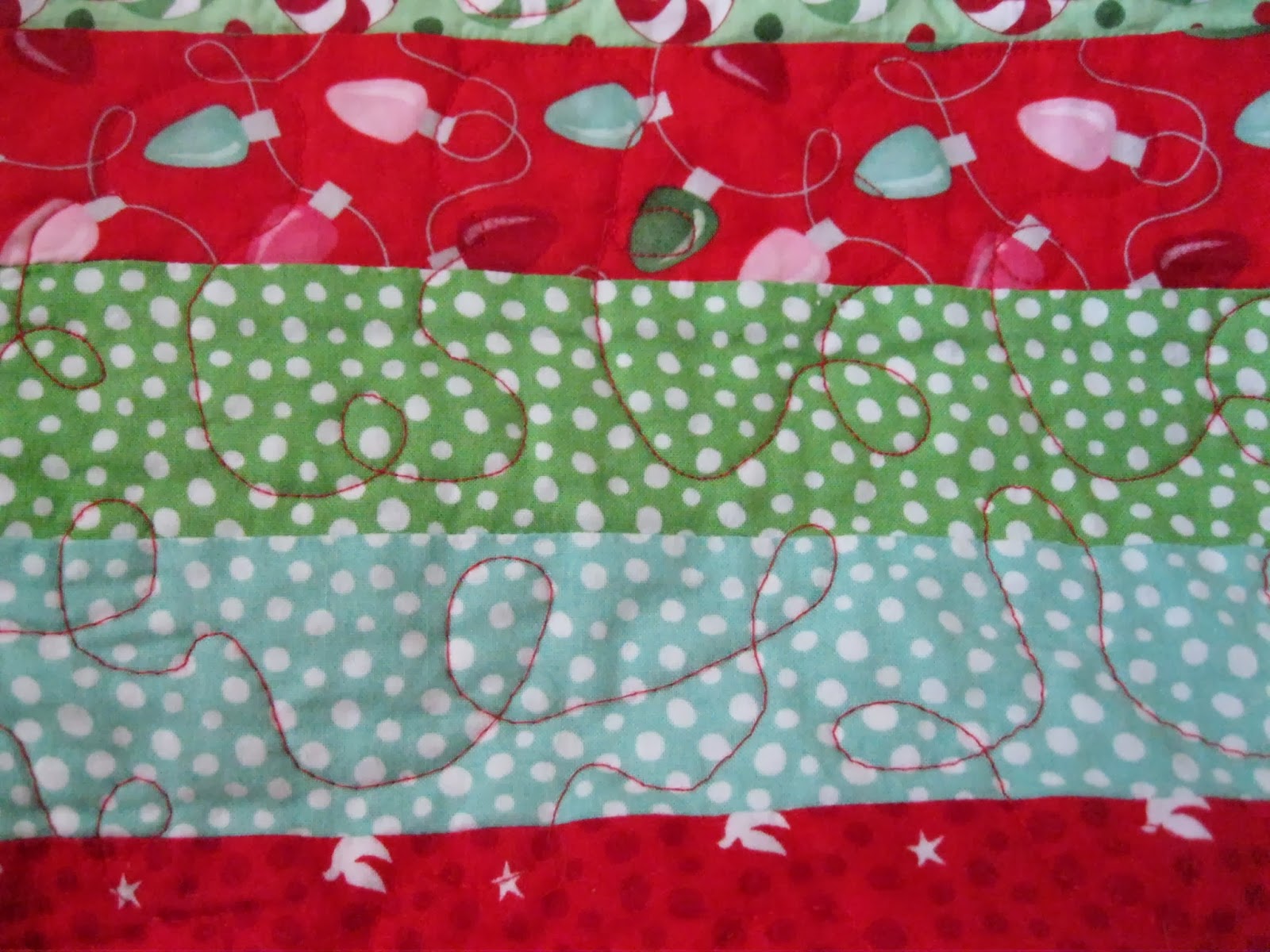 So, I am going to show a close-up of some of my crappy quilting. I tried to mimic the cording in the Christmas lights prints that meanders and circles, etc.  And then I thought “what the heck” and practiced anything I felt like. 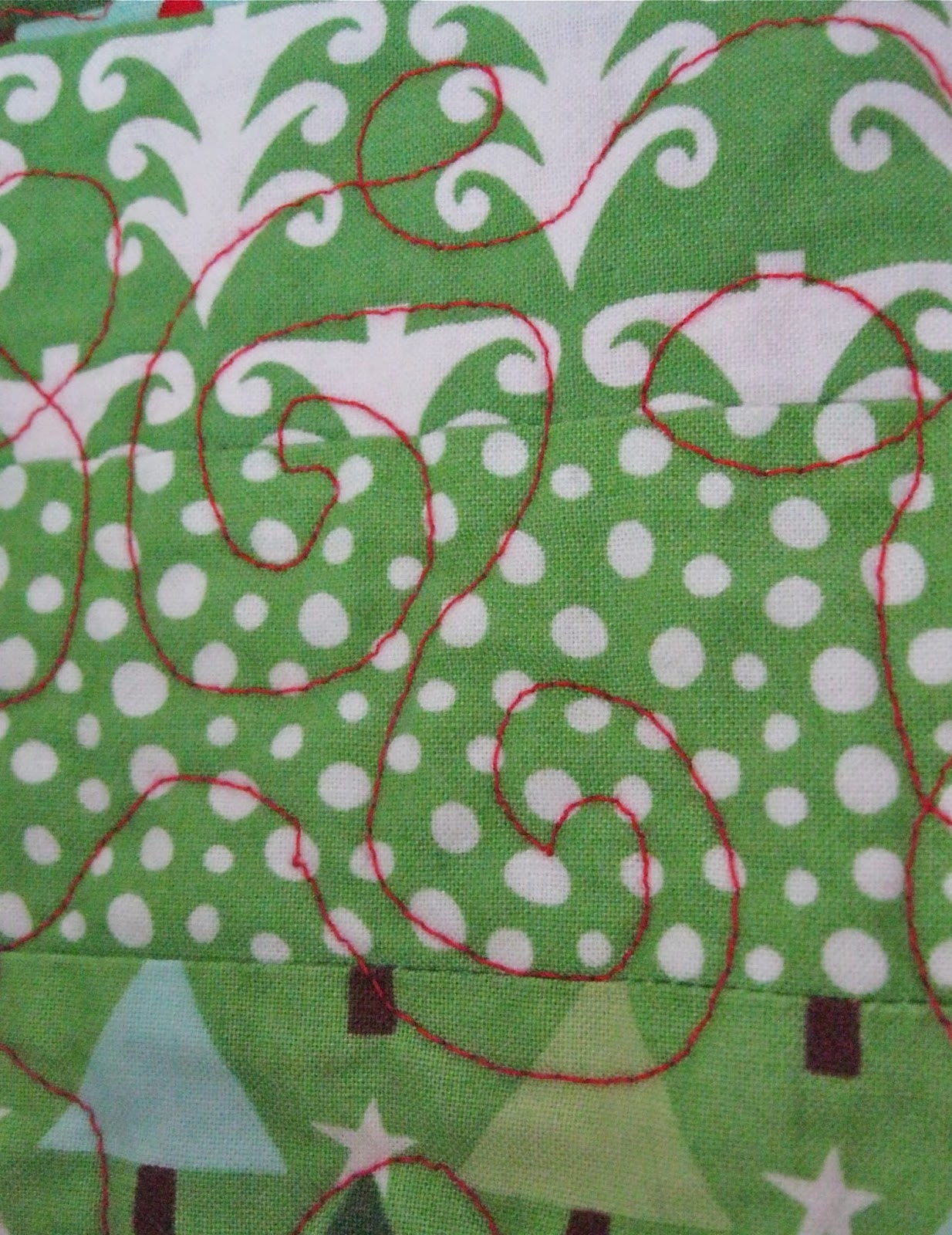 So the quilting varies here and there to include stippling, pebbling, waves and a holly leaf.  See?  Even in sane quilting I am good at breaking the ROOLS.    :-) 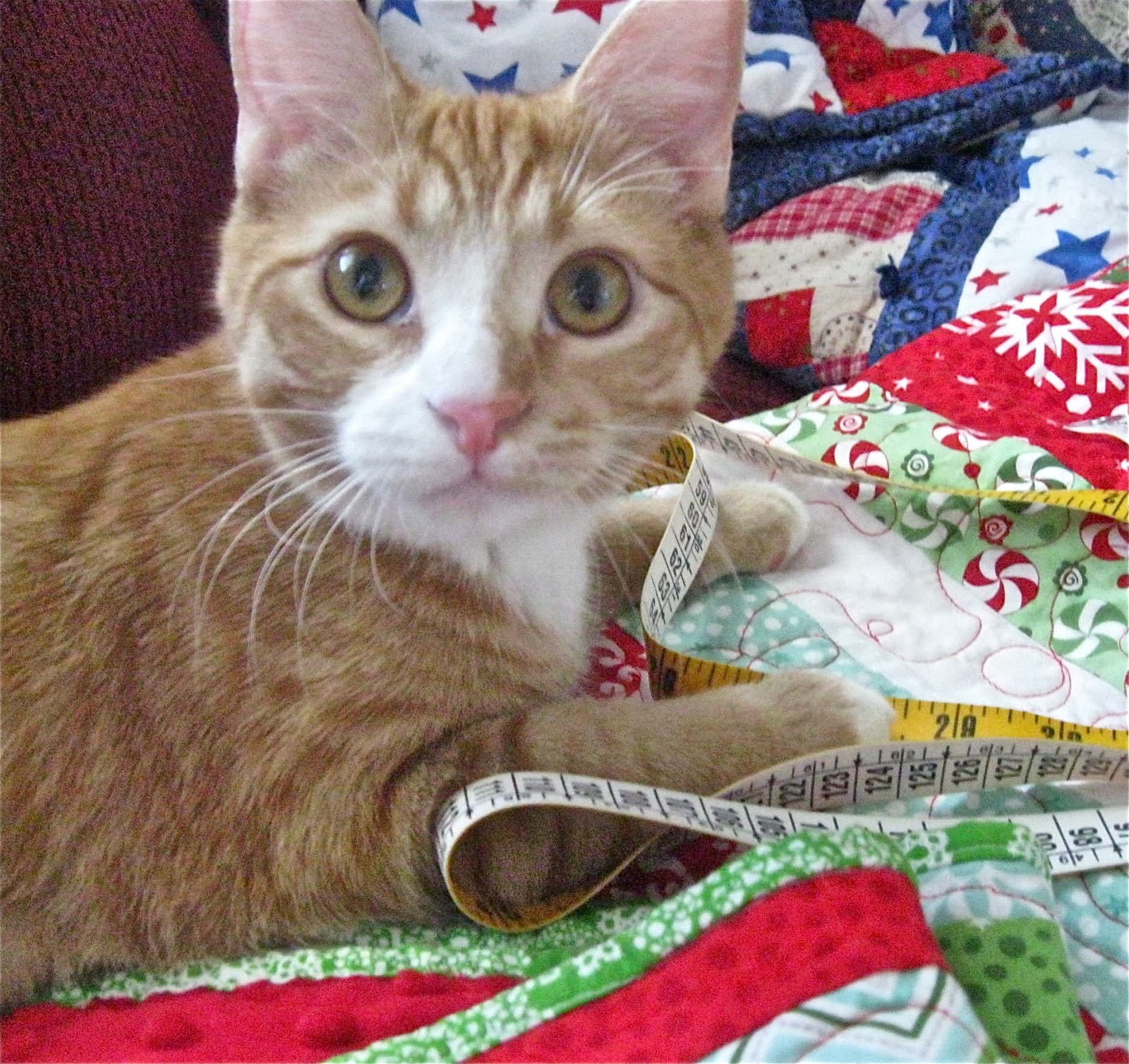 And, in the interests of Equal Opportunity, here is a cute picture of Darla, taken a couple weeks ago: 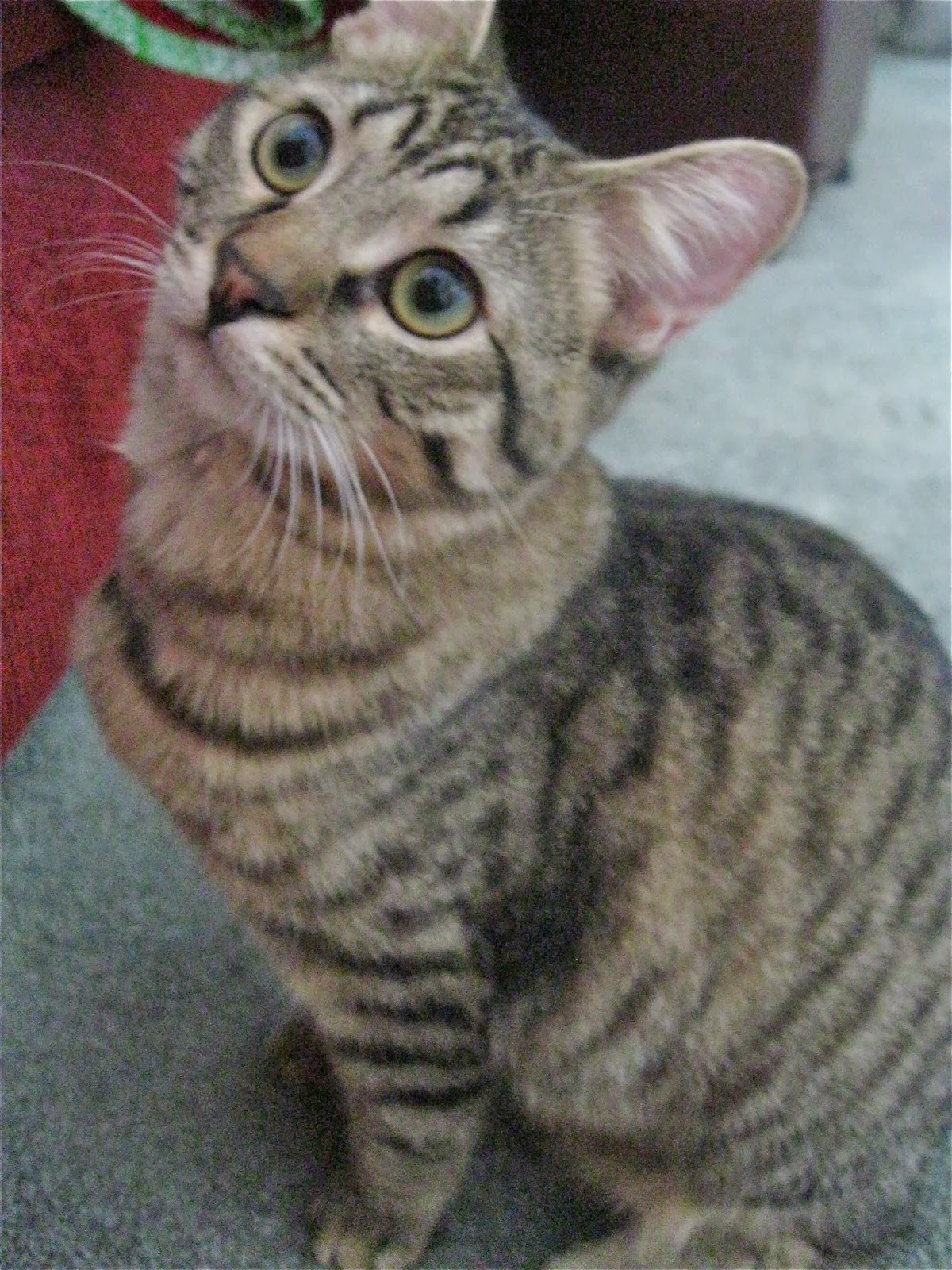 So, I finally got my long-anticipated Bernina 550QE (Quilters Edition) out of layaway!!  I paid for most of it with proceeds from my Etsy shop, which I am proud of.  Financially speaking, going on the cruise and vacation was a higher priority than the machine sincethe layaway was 12 months interest-free.  Here is my new baby, which I have named Bernadette: 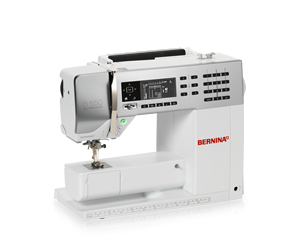 I have been taking the 4-week Owners Course and have completed 3 out of 4 weeks. Next week we will focus on quilting, and I'll learn how to use the walking foot and the Stitch Regulator (makes all stitches equal length when you are quilting!  YAY!).  The last week was a review of a lot of the heirloom stitching techniques that I used to do quite a bit of (pintucks and rolled hems being my favorites). I even bought a special gathering (ruffling) foot for it, so I am looking forward to sewing some cute clothes for DGD London this year!

My next goal is to save for a nice sewing table/cabinet with storage and lots of space for quilting and cutting out garments.

Well, my tummy is grumbling for dinner. Oh, and I am still on Weight Watchers and doing well.  Down 19 pounds so far, and going strong.

I will be back later in the week to begin catching up with CQ to show, wedding and cruise pix (I just want to see them again for the warm weather scenes!!), and a whole list of things. If I can find that list under this pile of paperwork for taxes. . .