Stay at Home Round Robin - Second Round

It took me a couple days, but I finished my second round for the Stay at Home Round Robin (SAHRR). 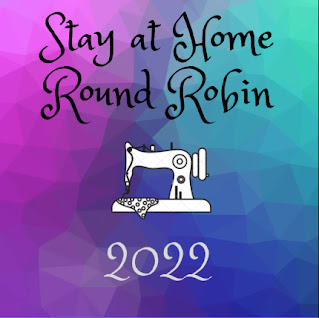 Our hostess this week is Emily from The Darling Dogwood, and she called diamonds for this second round. Now, I’ve never done diamonds before in quilts, and there are many ways to attempt them. That’s why it took me two days (well, two afternoons) to finally get them - I had to play with the possibilities, explore, cut and sew fabric and see what worked and what didn’t.
This is how my block began for this week, before diamonds. 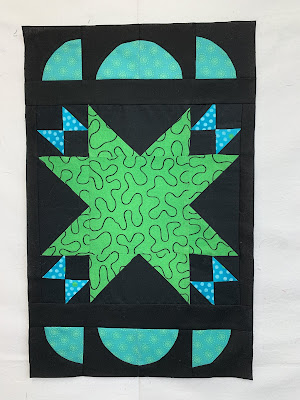 First I tried wonky diamonds like dear Wonky Wendy. As I recall, last year she called wonky stars and I couldn’t do them. So I tried wonky diamonds this year and couldn’t do those either. My brain can’t seem to grasp how to cut pieces large enough to fit their spot when reversed. I’m spatially challenged, I guess. I can do expert-level Sudoku, but I can do wonk.
So next I tried economy blocks (square in a square) with half-square triangles and various fabrics from my pull. They were underwhelming. So I tried them in a single color and it still lacked punch. By then, I was getting punchy. So I worked on other projects.
On the next afternoon, I had a brilliant idea to use my Accuquilt dies. First I pulled the half rectangle triangle die and cut up some more fabric. *Cough* With four pieced black/color rectangles placed together, the diamond ended up being humongous. I thought of cutting triangles (die cut or with rulers), but they were also too large. One more look through the dies - OH!! I have a diamond die. DUH. I bought my original Go! Cutter used from a quilter and it came with a lot of dies, many of which I’ve never used.
A couple hours of cutting and sewing and trimming and Voila! 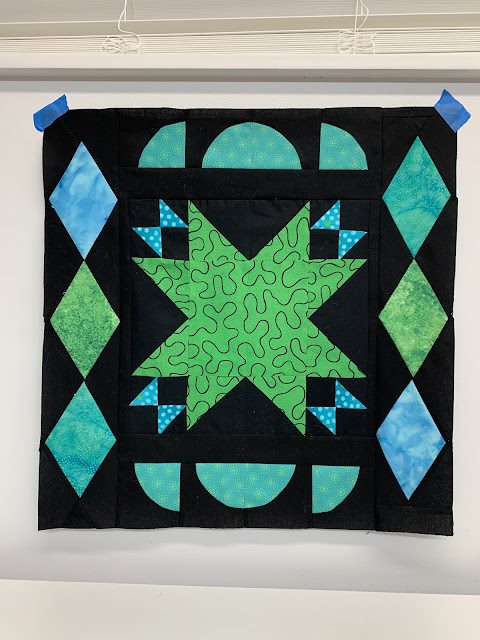 So now I’m back to a square piece of about 20-ish inches instead of a rectangle, but there are still four rounds to go, so it’s all good. And the good thing is that I got to play and experiment and learn more than I ever wanted to know about diamonds!  And I’ve probably got enough scrappy fabric off-cuts to do an entire round of crumb piecing if someone call that for a future round.
Anyway, come check out all the fun variations at this week’s link-up here (everyone has through the weekend to link up, so check back often!)
Posted by Cathy at 6:41 PM