The deed is done. The carpet is installed in our basement office, my studio and the stairs leading down to the basement. Whew! I paced myself over the 10 days prior to last Tuesday’s installation date to move all my fabrics (and tools, WIPs, and accessories) to the spare downstairs bedroom. The drawers from the office desk, plus all the office supplies storage, closet storage and the CD storage (which looks like an old library case) were moved over that time as well. Then, last Saturday we had to move two large and VERY HEAVY bins of food storage (a Christmas gift from my son Shane a year ago). The first bin we slid to the three little steps leading down to Bruce’s laboratory, and let gravity do the work. For the second one, Bruce wanted each of us to grab one side handle and lift and carry it. I know how to lift with my legs instead of my back, but I used my right arm and re-injured my neck and shoulder (we ended up sliding it down like the first bin). I have Thoracic Outlet Syndrome too, so even just overuse of my arm and shoulder can aggravate my neck. I was down for three and a half days days nursing my neck with a heating pad, ice, Ibuprofen and Tylenol. Lying in bed offered the best relief for a couple days, but by Tuesday I was up and moving. I’m almost back to normal now, just using Extra Strength Tylenol. Yesterday I went grocery shopping, mopped floors, did a load of laundry and made 3 pints of strawberry-rhubarb compote, so it was  a very good energy day.

Regarding the carpet, though, I don’t have any pictures yet. It’s a medium-toned gray/taupe, very plush and thick carpet. But it’s not really done. They are coming back on May 13 to install the coving, which is basically carpet baseboards. It had to have the edge finish cording (or whatever it’s called) stitched to it first. Once that is done, I’ll take pictures. And yes, I’ll have to move my fabric again so they can move the bookcases out from the wall to install it. But there isn’t really anything heavy for us to move (they do it), so in the studio it’s business as usual - and anything that isn’t needed can stay in temporary exile until mid-May.

So let’s move on to more Quilty things, shall we?

I did get my two Rainbow Scrap Challenge quilts quilted and finished. These were the windmill (Twin Sisters) blocks I worked on for RSC2020. First is the gender-neutral quilt (darker colors, no pink). 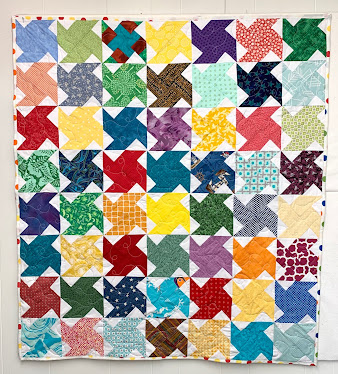 It was quilted with a viney loop and backed with a polka-dot backing fabric from Connecting Threads. 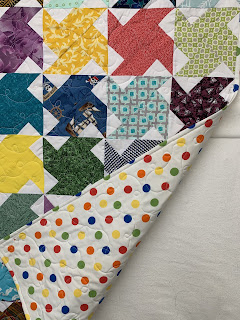 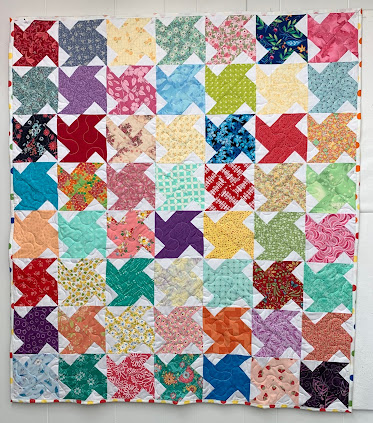 This had the same backing as the first quilt. Both quilts measure 42x48” and will be donated to Quilts for Kids. I’m also participating in Hands2Help again this year, and these quilts count for that. When we wrap up the H2H drive, I’ll do a recap post of my charity quilt donations. But for now, I’m linking up to Scrappy Saturday for the Rainbow Scrap Challenge.
On Thursday and Friday I decided to tackle those ugly pink and blue nine-patch blocks that I won last month. I thought I’d do a Disappearing 9-Patch, but I wanted to add a white (actually an off-white) into the mix. Then I discovered the Double Disappearing Nine Patch. There are a couple ways to do a DD9P, but this is how I did mine.
Start with your 9-patch and cut it into four even quadrants. 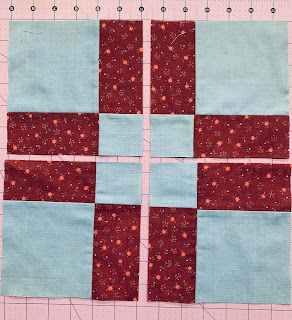 Measure your resulting squares and cut four white/background squares and one colored square the same size. place them to make another nine-patch, like below. 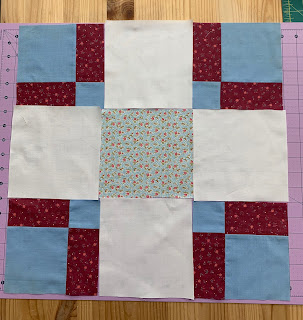 Sew together the “new” 9-patch, then once again cut into four equal quadrants. 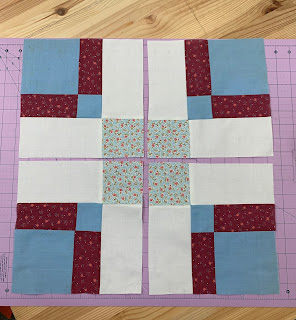 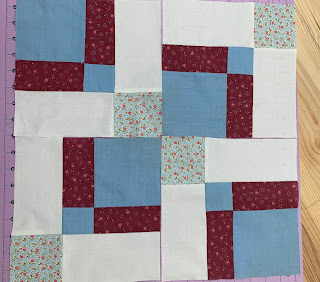 So now I have 8 of 12 of the original blocks sewn and chopped, and this is what I’ve got so far. The blocks at this point measure 8” and will finish at 7.5”. 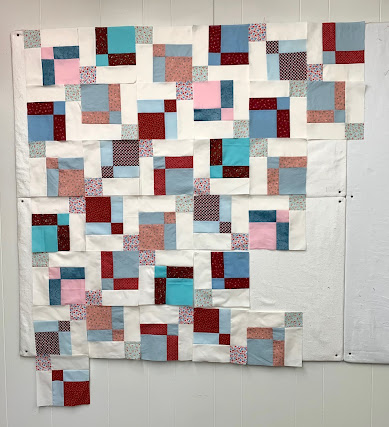 I’m going to set them 6 across by 7 down so that I’ll have six leftover blocks. I’m thinking there are at least 4 blocks (from one original 9-patch block) that will be too ghastly to include on the front. But they’ll end up on the back and I’ll be done with them! This quilt still won’t be a “looker”, but it will be a serviceable donation quilt.

Before that finishes up, however, I’ll be getting a start on my Red May RSC blocks. Here are some of the things I plan to work on in the merry, merry month of May.  My red scrap bin runneth over. It’s sitting on some red orphan blocks. 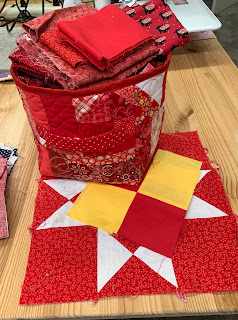 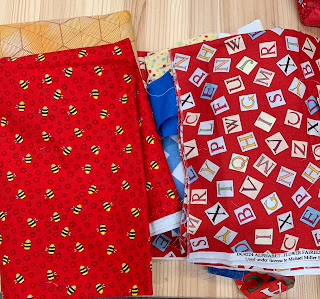 And finally, some red and navy large HSTs for another yet-to-be-designed kid quilt. 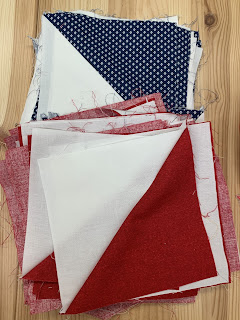 Our May is starting out much better than last year. Last week we passed the one year anniversary of Bruce’s arm amputation. Who’d have thought he’d be playing guitar and banjo this year? We’re celebrating his birthday (Monday) with his favorite; mud pie from Baskin-Robbins. We’ve invited some of the family over to help us eat it. There was no way to order just one piece each for ourselves, and death by chocolate is not an option.