This week we had so many plans and goals come to fruition, and it’s a wonderful feeling. Every year that we can live in this house (4 bedrooms, 3 bathrooms, my studio, an office and Bruce’s workshop plus a yard with 8 ½ raised garden beds) is a bonus. I’m 67 and Bruce is 74 with one arm, so we know our time here is limited. Downsizing is in our future, but not this year and hopefully not next year either.

The carpet guys finished up the basement this week and the final move-back of the studio and office is done. Well, I have one box to unload and return to shelves in the office, but that’s it. Bruce had help twice this week from the local church missionary young men, and they transferred two cubic yards of new soil into the garden beds. Today he (and me if he needs another hand, LOL) will install the drip irrigation in the garden beds and plant the veggies. I’m also planting the front entry flower pots today that I should’ve done a week ago. Since we had the exterior windows cleaned last week, I decided to clean the interior windows (paced myself) this week and do some deep spring cleaning. Next week I’ll clean up the downstairs bedroom and I’ll be all done with that. Yay!

Mother’s Day was lovely, with all kids either dropping in (the local ones) or calling (the out of state ones). I got flowers, gift cards, bath bombs and lots of hugs!! Such a beautiful contrast to last year!

I’ve been having fun sewing up my red scraps. Angela, our Rainbow Scrap Challenge leader has called red for May. Since I have a lot to share, I’ll be linking up with Scrappy Saturday. First, I finished quilting and binding the Red Alphabet quilt for Quilts for Kids (QFK). 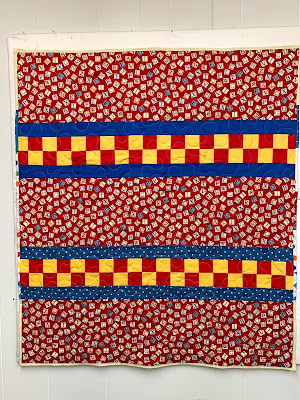 This little quilt finished at 40x45”. It used the red alphabet fabric that my friend Angie sent me last fall, plus some red and yellow squares from the QFK scraps and some blue strips from my stash. 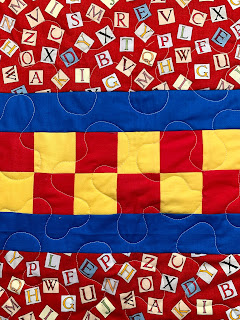 The quilting is just a simple stipple. The backing is a hodgepodge of scraps from my stash, QFK, leftover alphabet fabric, etc. I love using things up. It’s rather hideous, though. But kids don’t care.... 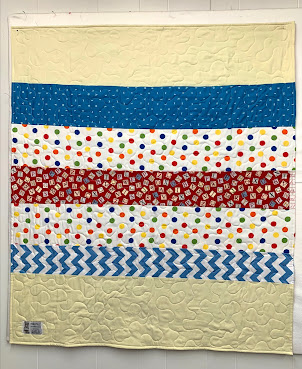 With that done, it was time to put the pedal to the metal and sew some red blocks. First, two Spring Stars. They will measure 12” when sewn into a quilt. 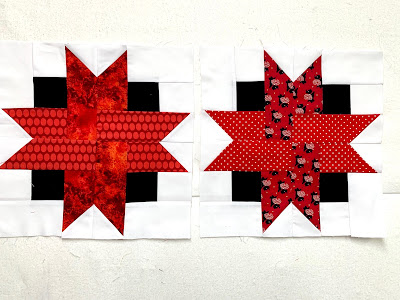 Those took no time at all, so I kept going. Next up were the waffle blocks. The one in the center was my test block that I sewed last year to see if I’d like them.  Naturally, I loved them, so here we are. I sewed two more this month, but I’ll count all three since I never counted the test block. They are set four together to make each block 10.5” (10” finished). 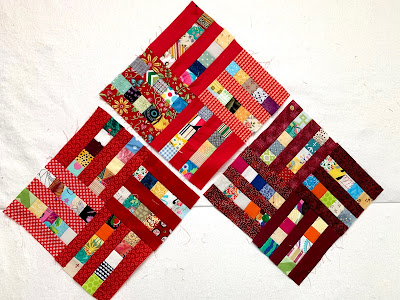 A couple weeks ago I showed a pile of large red and navy half square triangles. Well, as I went through them this week, I realized the red ones were only half sewn. So, I finished those and counted them all.

There were enough of each color to make 11 pinwheel blocks of each color. But what quilt layout uses 22 blocks? I decided to use ten of each for a 20-block setting. So, now I’m sewing a red pinwheel and a blue pinwheel - one of each every day. Then I’m cutting them into two different Disappearing Pinwheel variations. 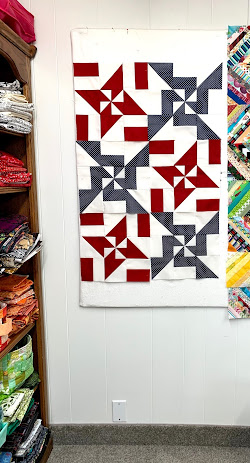 You can see what the blocks are going to look like eventually. I had a better closeup, but I wanted to show the new carpet and coving in this picture. See? My fabric is even back on the shelves. The old hard-wired telephone lines (and yucky old phone outlet) are gone and everything is clean and spiffy now. I love clean and spiffy, hehe!  But I digress.....
I’ll continue to sew one red and one navy block every day, and in another week or so, I’ll have enough to assemble them into another QFK quilt top.  I also decided to pull some of my string blocks and use up some for another string top. Here’s what I pinned up on the design board. Those three red string blocks in this top are the only red ones I had left from last year’s red month. 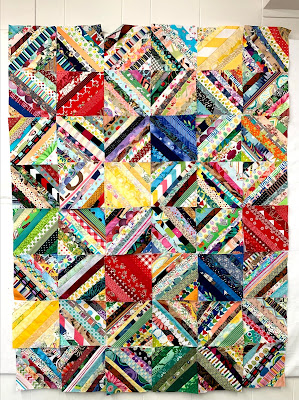 But fear not! I got a wild hair to sew string blocks this week, and I made 30 new red blocks. 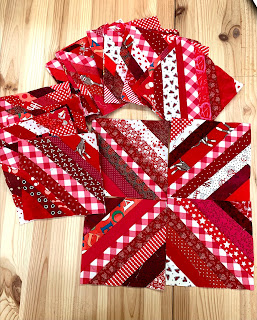 As usual, the string blocks will finish at 6”. I have plans for six of them to go into an in-process red scrappy column quilt. There will be 4 columns of 6” blocks and 2 columns of 8” blocks. So, the length will be 48” and the width will be 40”.  Besides the snowballs and rail fence blocks below, there will be the string blocks, some nine-patches and then the 8” blocks will be windmills and sawtooth stars. 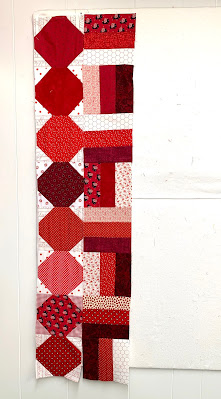 I actually have more blocks to show, but I’m going to save them for next week. My goal for the coming week (after the flower pot planting and deep cleaning the downstairs bedroom) is to finish the red scrappy column quilt top, sew the string blocks into a top and maybe even get them both sandwiched up. And of course I’ll continue to sew on those Disappearing Pinwheels.  So if you drop by, you’ll either find me out working in the yard or downstairs sewing. Life is good.
Posted by Cathy at 8:10 AM