We’re into our summer routine here at Chez Kizerian. Bruce spends most mornings out puttering in the yard. Today he whacked weeds out of the walkways between the garden beds, along the driveway and in the sidewalk cracks. If you’re a weed, never underestimate what a one-armed man with a weed-whacker can do to you! I join him two or three mornings a week pulling weeds, keeping the grape arbor trimmed, filling bird feeders and deadheading blooms. Sometimes I do housework or errands instead. Next month I’ll start thinning all the overgrown iris beds, and preparing and labeling the rhizomes for a massive giveaway to Cousin Kim and any unsuspecting neighbor who would like irises. With the weather now in full summer mode, we get out early and come in well before noon. Afternoons can then be spent playing, which for us means reading, sewing (me) or tinkering (Bruce). How did we ever fit all this stuff in when we were working full time?
So this week, being the last full week of the month, I concentrated on getting my four basted quilt tops finished. They were quilted, bound, labeled and photographed by Wednesday. Let’s take a look, shall we?
First up was Creature from the Bubblegum Factory.  I had a lot of leftover pink blocks from various other projects over the last couple years. To that I added some of the 6” string blocks I made earlier in the month to fill things in as needed. It ended up at 42x55”. 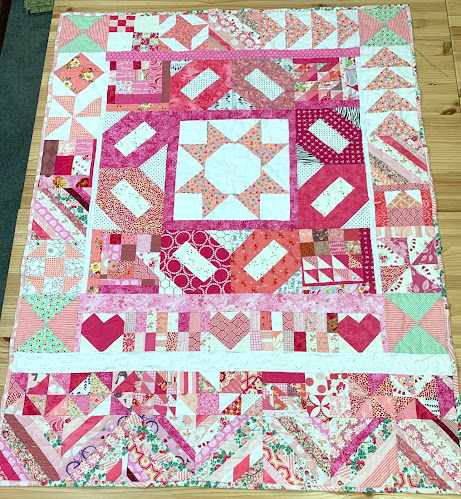 Here is a close-up of some of the quilting, which was just my usual stipple. 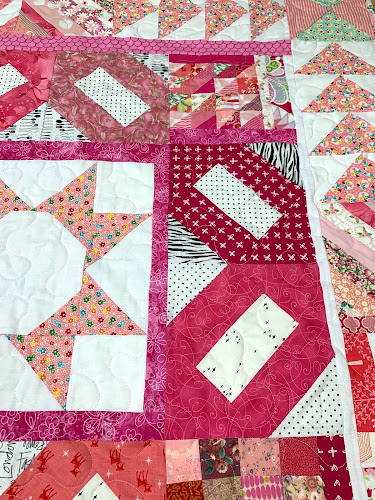 The backing was leftover fabric from some I used in a quilt earlier in the year, given to me by my friend Annette who is in my Weight Watchers group. 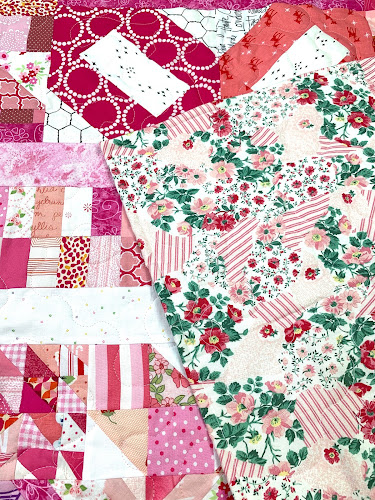 Then I decided to get the two donation quilts of civil war reproduction fabrics out of the way. This first one is just plain horizontal strips cut randomly. I actually ended up liking these quilts until I realized I had no background fabric that was appropriate or matching from my stash. For the Quilts for Kids donation quilts, the backing and binding are one piece. Once the quilt is quilted, we trim away the batting first, then trim the backing fabric 1” larger than the front all around. That excess fabric is folded to the front and becomes the binding - an all-in-one method that saves a lot of time and fabric (which is great when you’re cranking out lots of quilts for charity). 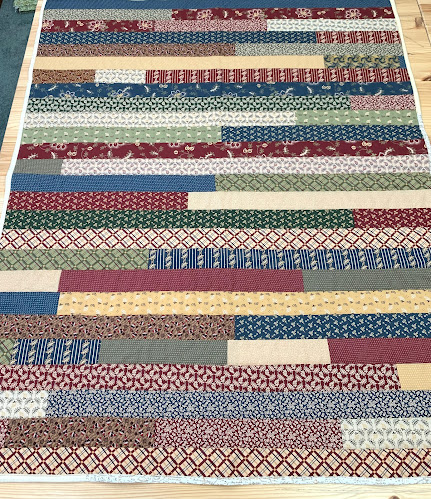 For some reason I can’t explain, Blogger won’t recognize the pictures I took of the backs of these quilts, and I’m not going to haul the quilts out again and re-take pictures to appease the Blogging Gods. In fact, after this month, I have a few choice words for Them that aren’t repeatable here.
So, the stripey quilt above finished at 42x52” and the striped squares block below finished at 40.5 x 50.5”. 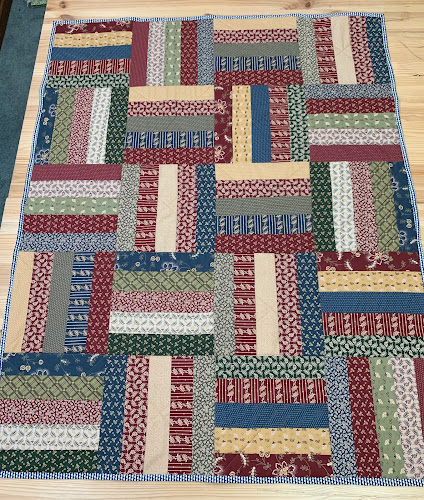 And lastly, I finished the simple pink patchwork donation quilt in an effort to use up more of my pink scraps. It turned out very sweet and cuddly. 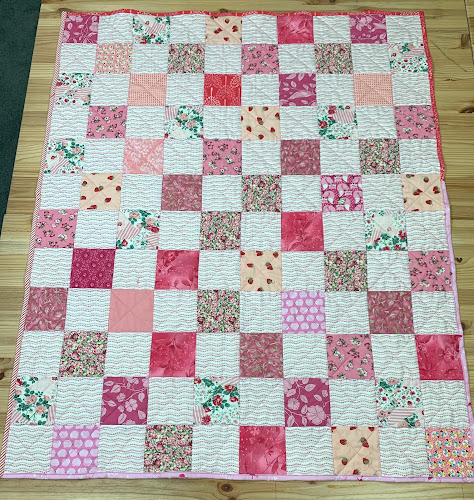 The quilting was a simple stitch in the ditch and then a crosshatch in the blocks. Finished size is 40.5 x 48.5”. 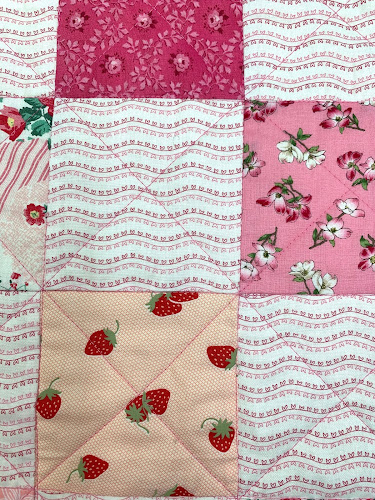 The backing used up some chunks I had. It was good to see them finally get used. 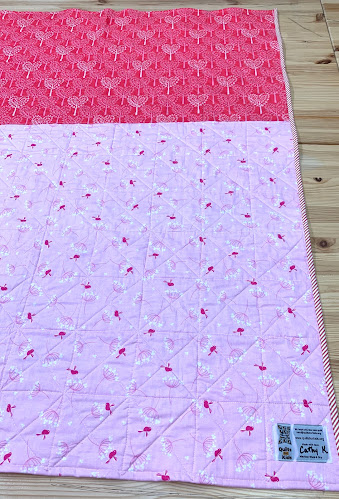 I’m linking up today to Scrappy Saturday at Angela’s blog. Here is a summary of the pinky goodness I stitched this month. 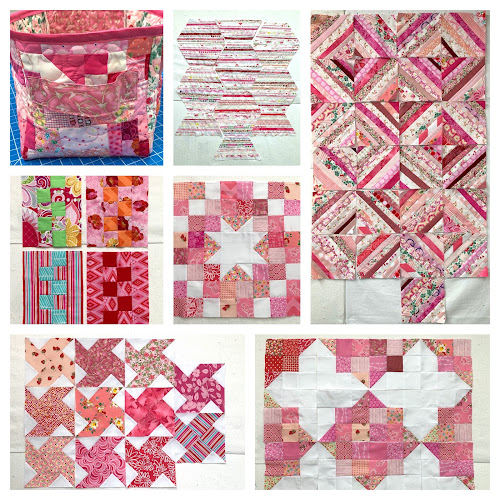 One pink scraps tote bucket, 16 pink selvage half hexes, 25 6” string blocks, 4 zipper blocks, one Scraptastic Star, 11 Twin Sisters blocks and 12 Split nine-patch blocks, for a total of 69 blocks and one bucket.
After Wednesday when the quilts shown above were finished, I just had to make more Zipper blocks. These are addicting, and I’m not sure I’ll be able to hold off and just do these in the color of the month. In fact, I’m pretty sure I won’t. These are six additional blocks I sewed from the Sallyscraps. 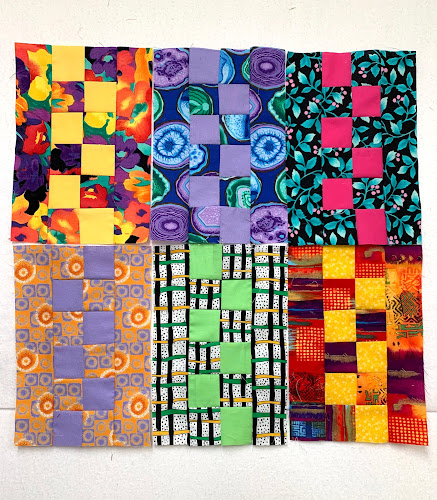 And just to show you what else is on my “plate” (if by plate you mean my sewing tables....), there was some of this going on... 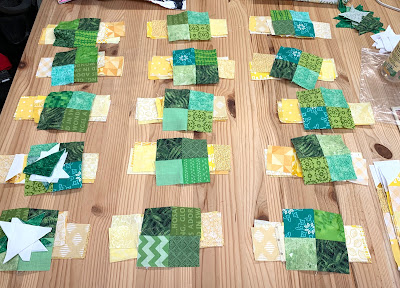 This is/was my OMG (One Monthly Goal) for June, which will not be finished by month end. I decided not to go crazy trying to finish it at the last minute. It will be another pineapple quilt (literal pineapple motifs, not the pineapple piecing technique). The yellow strips are all sewn and matched up for 23 out of the 24 blocks. The green “foliage” four patches are all sewn, but each of the 24 pineapples will need 6 half-square triangles. Those 144 green and 144 white pieces are all cut and waiting to be sewn and trimmed. And then I’ll have to piece the final 24th pineapple in an as-yet-undecided color. Should I do pink again? Or aqua? We’ll see...
And yesterday this Christmas panel arrived. I’m going to do a Christmas quilt for my brother who loves old cars and trucks (and quilts too).  I’ve got plenty of black fabric, but I may run over to Joann Fabrics to get some Kona Red while I have a valid 50% off coupon. That car fabric hanging on the right (below) will be mostly for the back, but it may become one of the borders (I plan on 2-3 borders) to enlarge the size. 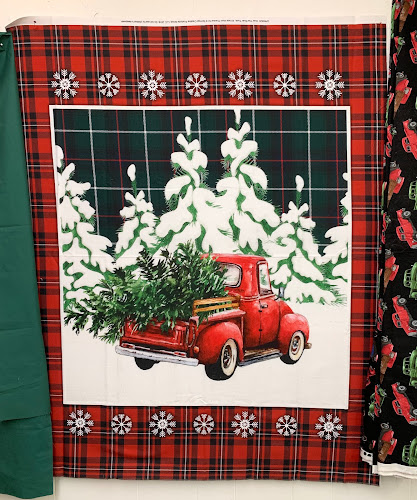 I’m looking forward to playing with this one!
Posted by Cathy at 9:28 AM