Keeping my Head Down

It’s been an historic week or two. Nationwide Worldwide protests have taken place over police brutality in general and the tragic, unnecessary murder of George Floyd in particular. While the protesters have been mostly peaceful, there have been some violent infiltrators from both extreme ends of the political spectrum who are looting and causing damage. We’ve seen nakedly political stunts and heard tone-deaf statements by politicians at the low end of the scale. At the high end, blacks and whites (and browns and people of every skin color, age, gender identification, religion, etc.) have marched arm in arm to end police brutality and systemic racism; to call attention to issues and shine light on problems that have remained shrouded in secrecy and denial for too long. The people of our great nation have finally awakened, and it truly feels as though these righteous causes have at last reached critical mass. We will not be going back to the old ways.
And all of this grand scale upheaval comes against the backdrop of COVID-19, which continues to rage through the US at alarming infection rates. This year, 2020, isn’t even half over yet. What do you think the rest of the year has in store for us? Fires? Earthquakes? Floods? Locusts? Actually, we’ve seen all those already in the first half! All I can imagine is that after this year’s run of awfulness, 2021 is due to be the greatest year in the History of Time.
* * * * * * * * * *
So, yeah, I’ve been keeping my head down this week. Early in the week for about 3-4 days it was because of an inner ear infection that left me alternately nearly deaf in one ear and/or too dizzy to get up. But it has passed, and the next round of keeping my head down was more the pedal-to-the-metal variety at the sewing machine. And so I turned from issues of black and white to the very refreshing issue of PINK, the Rainbow Scrap color of the month for June.
First up were the strings. I had a ton of pink scraps, and for the last couple years have not made much of a dent in them. This year I’ve been determined to change all that. The strings, then, yielded 25 squares at 6” (finished size). Wow. 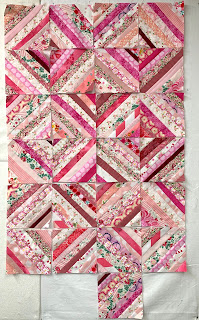 And then it was on to making my scrappy basket for the month.  Although I’ve been using Angela’s pattern (link here), I modified it a bit this time. Instead of creating a totally separate lining, I quilted each side panel as one unit, then sewed them together at the corners. I overstitched the seams for neatness and security. The bottom panel as inserted normally, but I used cardboard for sturdiness between the layers instead of batting. The top edge was finished with bias binding. 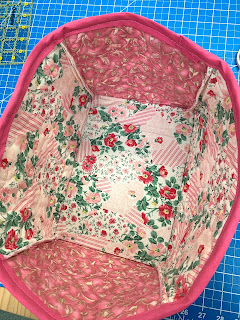 I did add the handle on the side as usual, a feature I love! It turned out so cute! 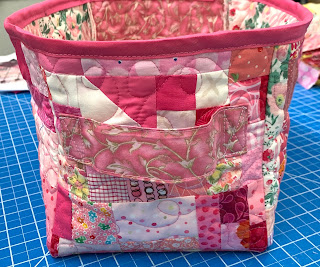 Here it is on the shelf. Wow, it finally looks as though my stash is noticeably smaller! Look how tidy the pink bucket looks compared to the orange one I did back in February! 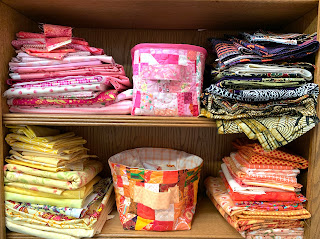 There was also some work on my scrap (“Creature”) quilt. The center medallion portion is sewn together. However, I realized that I made the white coping strips on the sides (barely visible in the picture below) too narrow. It’s width measures 30”, and it needs to measure 30.5” to allow for seams. Arrrrgh! So, I’ll be giving my seam ripper a workout first thing today and replacing those before I can move on. 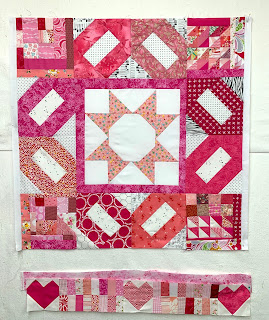 I’m aiming for a rectangular quilt, so the top and bottom will begin to see more stuff added as I work outwards. I have 21 various 6” orphan blocks to add, plus lots of 4” blocks, fabric squares, strips and any of those string blocks from above that I might need. This is the fun part!
When my friend Terri visited about a month ago for a socially-distanced lunch out on the patio, she brought some baby quilts she’d made for Quilts for Kids as well as some kennel quilts for donation to Best Friends. Kennel quilts! That set me on a frenzy to sew up all the cat fabric and “parts” that I’ve had laying around for over a year. I cut and sewed the fabrics into matching panels and cut batting scraps. Everything is paired up now and will become 19 finished kennel quilts of varying sizes. Twelve are sewn together and quilted, seven are still left to do. 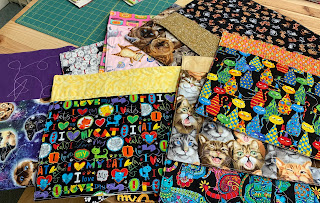 A lot of these fabrics were 10” squares from a layer cake pre-cut pack, so that’s why there are strips of coordinating fabric added to the tops. You’ll notice that kennel quilts don’t have traditional binding. They’re made by sewing three layers (top, bottom, batting) together, right sides facing, then leaving an opening for turning. Once turned, the opening is sewn shut as a top-stitched seam around the entire perimeter. That way, the kitties (and small dogs) who use them aren’t tempted to tear off the binding. Then it’s quick work to just quilt the mat as desired.
Does anyone else make kennel quilts? I’d be happy to do a tutorial if there is enough interest or if my description isn’t clear. I imagine this is an easy way to make placemats, too.
So that’s it for this week. I’ll be linking up to Scrappy Saturday for the Rainbow Scrap Challenge.
Posted by Cathy at 8:30 AM