When life gets so busy that it's hard to find time to write even one blog post per week, surely it's a sign that a relaxing summer is not on the calendar! Yeah, life is crazy. But it's mostly good crazy.

The word of the week last week was APRICOTS. We picked several cases every other day, and so far have been able to find neighbors, friends, family, and the gang at Weight Watchers to take them off our hands. Even the birds have been enjoying them! To be sure, we've kept our share. After a couple hours picking and sorting, we come inside and begin processing. I'm channeling Bubba Gump here when I tell you we are making apricot jam (regular and low-sugar), frozen apricots, apricot puree, canned apricots, apricot fruit leather, and dehydrated apricots. And eating them warm from the tree by the dozens. If I had remembered to take a picture of the tree, you would see a definite depletion of the apricots compared to last week's picture. We are probably past the halfway point. Hopefully.

We did take time out for a doctor appointment (more about that later in the post). One day we had family over to learn how to make jam, and on Wednesday I had Cousin Kim and my friend Bonnae over and we sewed all day. It was heavenly. So, despite everything, I managed to crank out some pink blocks for Scrappy Saturday at Angela's Rainbow Scrap Challenge link-up. 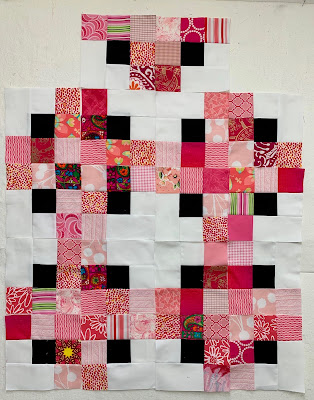 And then I sewed four 9.5" strip blocks and six 4.5" strip blocks. No plan yet for the smaller blocks. I just have so many pink strings that I wanted to use more of them. There are still plenty to add into other projects or wait their turn for next year. 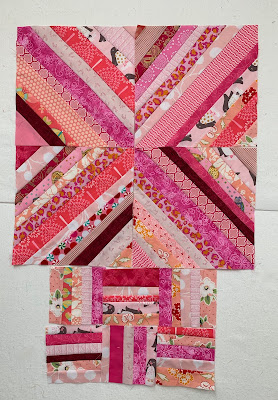 Next up were the International Sisters blocks. These are the delightful former African Queen blocks that were re-drafted by my friend Preeti. I started making these in May with the color orange, then progressed to blue in June and now pink in July.  I ended up making dressing nine Sisters. Two are twins, and the ninth one was a little late to the party, but they are all present and accounted for! 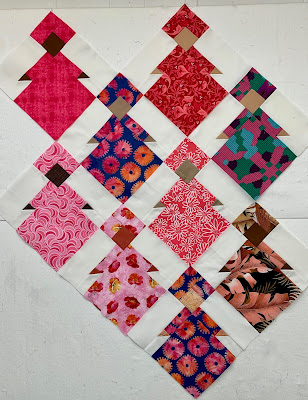 I was so inspired by Preeti's thoughts and words as I read her blogpost this week, Women of Color. Political news is never fun and games, but when our country's President stoops to telling women of color (U.S. Congresswomen, no less) to "go back" to their "crime-infested countries", we've hit a new unacceptable low. This IS their country! Our country. All colors, all political beliefs, all religions, economic levels, education levels, abilities and interests. Our strength is in our diversity. As Preeti observed, when one woman is attacked, each of us is under attack.

Good people can agree to disagree politically (or in other areas) and still be friends. Or at least polite. We should not allow anyone to demean women! Bullying and hatred need to be called out and crushed whenever it is given voice or action by ANYONE.

It truly pierced my heart to hear those words. So, to calm myself, I began sewing International Sisters. First were the twins. They may have differing complexions, but they are definitely sisters. I decided to name them this month. But I'm not matching names to complexions because each one is a symbol of a sisterhood that goes beyond the color of their skin. Meet Malala and Rosa. 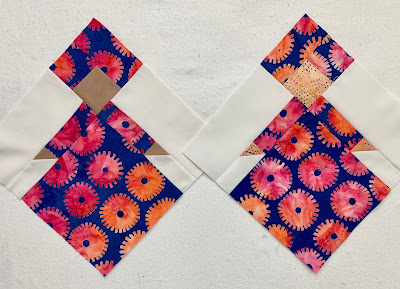 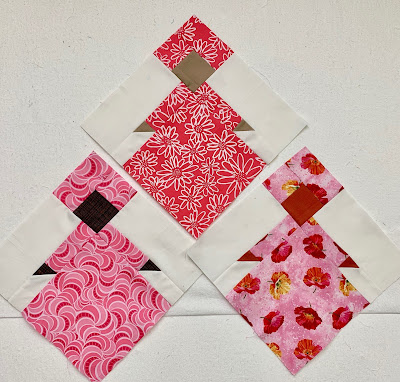 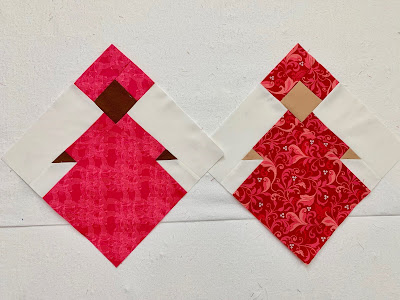 Coretta and Harriet. Coretta's dress is from fabric sent to me by my friend Sally, and Harriet's dress is made of some fabric I brought back from Kenya last year.  Speaking of Kenya, it was one year ago this month that I was there, and the desire to return burns as strong as ever. 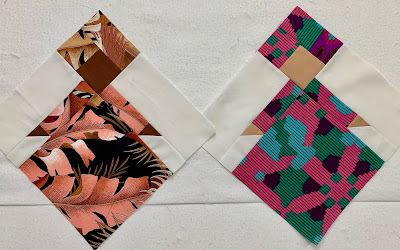 And finally, in a show of sisterly solidarity, here are all my International Sisters to date. 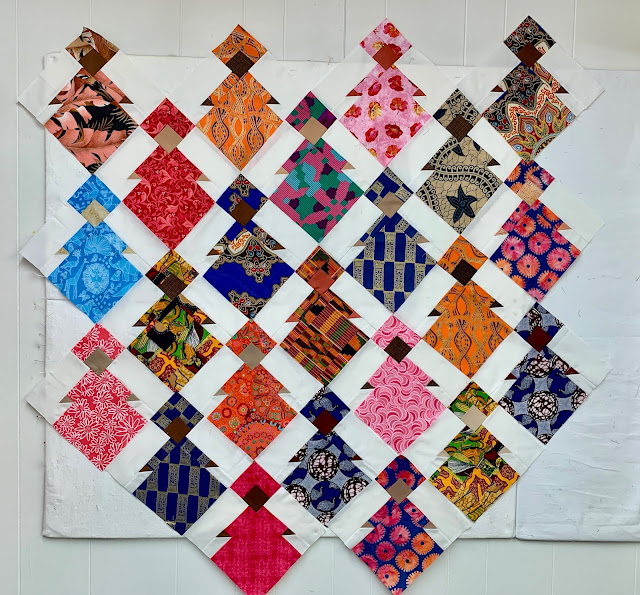 The doctor appointment I referred to above was for Bruce. The cancer in his right forearm (just above the wrist) is back. The MRI shows that it's near where they did the tissue transplant 2 years ago. This tumor is deep, but the good news is (a) his chest scan was clean and no lymph nodes are involved, and (b) they can operate to remove it without taking his hand or forearm. The surgeon will take out the tumor and affected tissue, and unfortunately some ligaments. Bruce will lose the ability to open his hand more than halfway, but should still be able to, after therapy, use his fingers to type, play the guitar and perform other fine motor skills.

In general, we're optimistic. It helps that we've been through this before and know what to expect. Specifically, the initial surgery (or surgeries) will remove the offending tissue, while subsequent surgeries will attach his hand to his stomach area for tissue grafting, then detach it after 3 weeks once circulation and viability is established. So, we're looking at 3-4 surgeries over the next couple months, beginning August 7. Please keep a good thought for my dear Bruce in your heart.