This month, Angela chose red as our color for the Rainbow Scrap Challenge. I have a few red scraps, but not as many as most other colors.  When we had red as an RSC color last fall, I had and used tons of red scraps, leaving only a few behind. So, although I did add to it with some Christmas scraps, trimmings and whatnot, there are not as many as I normally like to work with. So, I confess to cutting into a couple red FQs (bought for the express purpose of rounding out my red “scraps”).

But I did get one thing sewn up so far; a red crayon!  Linking up my meager red offering to Angela’s Scrappy Saturday post for the Rainbow Scrap Challenge.

Of all the projects I work on with the color each month, the crayon always seems to be the first. I guess that’s because I want to get as much variety in it before I chop scraps up too small to use. There are several duplicates in there, as always, but that’s just fine.

Here is the state of my red scraps. I also have some ancient cream with red yardage I hope to use up this month, as well as a lot of scraps that are mostly white with red. We will see what develops. 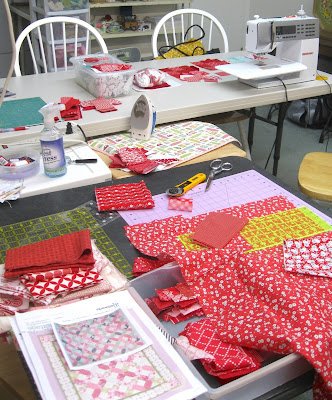 I’ve been working on sewing this quilt top together. I have it laid out sideways on my design board, but have flipped the picture so you can see the correct orientation. Two out of six rows are sewn.  And then the borders. This will be a priority this week so I can get it into a flimsy state and free up my design board. 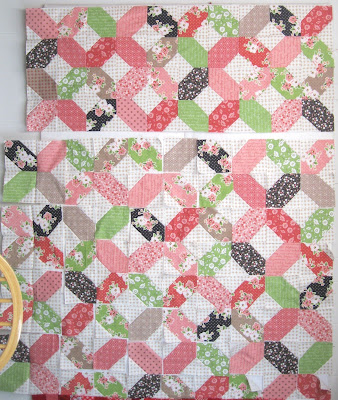 Finally, I finished the quilting on my penultimate RSC16 project, the scrappy 16-patches. It is just a diagonal grid. What fun it was just to straight stitch with my walking foot again! 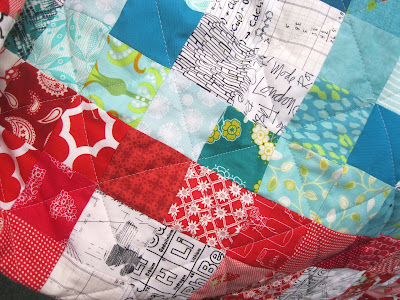 I will do a full reveal post later this week after I have trimmed, bound and washed it!

In hubby news, the surgery last Monday went well, but long-term lab results show they did not get all the cancer on either site of his forearm. So, there is another surgery scheduled on Wednesday to take more (hopefully just tissue). But first, we will meet with the plastic surgeon on Monday, who is coordinating with the actual oncology surgeon. I am doing Bruce’s daily wound care and dressing change, and it is a real “grown up moment” when you see the actual working tendons and arteries in his arm. His clothes are easy-on pants (a shopping trip was involved), and I have to drive him to the Trax station which takes him to work. He is on light duty and working as a docent instead of his usual job of building/engineering/computergeeking. And if the truth be known, it’s good for him (and me, LOL) to have him back in his regular routine, even if only for a few days before we go back to square one to “rinse and repeat”.

Tonight we are going out to dinner with my son Ryan and DIL Kim. We are really looking forward to that!  Have a wonderful week.