Dusting Off a UFO

Lest you think from the title that I’ve been off doing housework with aliens, I will clarify right up front that a UFO, to those of us in the needle arts, means “unfinished object” or project.   And I must admit that after I dug this old project up, it did seem rather alien to me.


At Crazy Quilting International, we do an annual charity project, and this year’s project is once again for the purpose of raising money for breast cancer research.   I originally started this CQ wall hanging in 2001, a year or so after I began crazy quilting.   On another list (Quiltropolis, I believe), I had hostessed a tea-themed swap.  Although I loathe tea in any form, I love teapots, teacups, tea cozies and the whole ritual of “taking tea” .  I can’t help it if my mother felt the best way to get rid of nausea when I was little was to make me drink tea.   It worked in reverse, and now the smell makes me gag.


Back to the story - I pieced this wallhanging with snippets (machine embroidered teapots and fabrics) received in the swap, except for those that I used in this tea cozy. 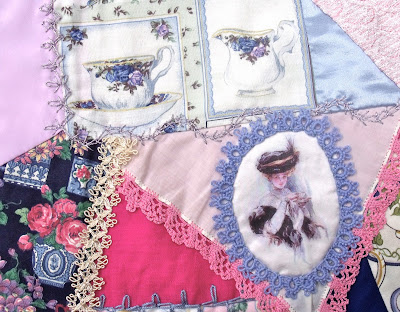 I usually try to stay away from the color blue, but too many of the fabrics had a predominance of blue, so I thought a pink and blue (with variations in intensity) would work.  And then somewhere in there I started adding gold.  Sigh.  I wanted to use that velvet-embossed teacup. 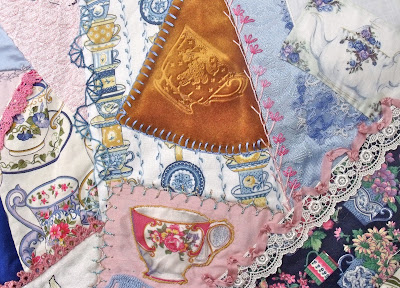 So, after piecing, I added tatting and lace and began stitching basic seams.  I even added a doily over which I planned a silk ribbon floral arrangement. 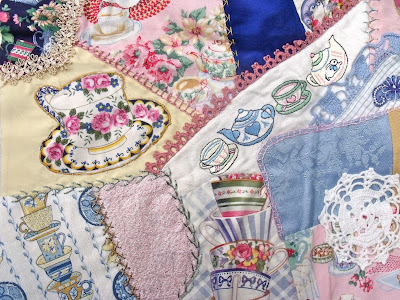 And in the big gold patch in the lower right, I planned to embroider a quote about tea.  It was a four line verse and I ran out of steam on the first line and just frogged it (today, LOL).   Now I don’t think I want a verse there anyway...  And that doily has got to go, or at least be moved... 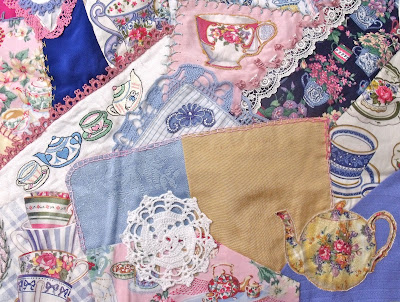 I took these pictures so I could see on the computer what it looked like overall at this stage.  I know, I could’ve just used a reducing glass or design board.  But by doing it on the computer and posting it to my blog, I am committing myself to work on it.   (OK, no jokes about me needing to “commit" myself, LOL).
So, this is the overall “before” shot, and when I finish, I’ll do an “after” shot. 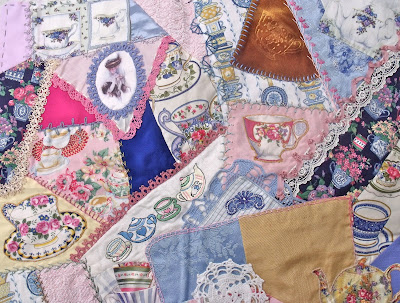 My feelings at this point are that I can work over the two navy floral patches.  With silk ribbon, I can probably bring the flowers forward and cover or let the background recede.  Perhaps I can do that as well with the loud pink and blue patches, but I think they’ll need to be covered with lace or tulle to tone them down.
And Lazy Me wants to keep the gold teacup patch, but Artistic Me thinks it’s gotta go (and speaking of needing to be committed...) .  I want flowers coming out of that teacup on the pink patch near center right.   And I do plan to add more layers to the stitched seams (at least some of them) - layers that will include threads, ribbon, beads, etc.  Maybe even sequins. Maybe. 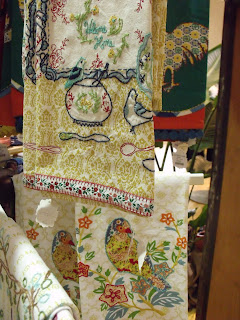 And then I ran across this picture I took at Anthropologie last summer and began thinking of getting rid of the Victorian silkie on the block and perhaps give it more of a country spin.  Less of a formal "tea-with-proper-posture-and-pinkie-finger-raised" feel and more of an "informal-tea-in-faded-overstuffed-floral-chair-in-Costwold" feel.


So, is any of this making sense?  I would love to hear your thoughts and opinions on it!  Not on my mental state, LOL, but on my “vision” for the Tea Time piece.