The Elephants and the Squirrel

Hello! No, I’m not going to tell you an Aesop’s Fable. But I bet we could make up a good one with elephants and a squirrel, don’t you think?. But these elephants and the squirrel are made from fabric, and the moral of their story is that I’m crazy for sewing and quilting. But you knew that already.

We had a strange day on Wednesday. It was about 8:30 in the morning and it was drizzling outside. We were sitting in the living room drinking our coffee when we heard a thunderous BOOM! The power flicked off and a car alarm a couple houses down the street started honking. Long story short, an electrical transformer blew, taking the top part of a telephone pole with it. It occurred two houses down from us. The boom was so powerful, it set off that car alarm! Murray City responded quickly, but we knew we’d be without power for most of the day as they said the had to replace the transformer and the pole. Anyway, there went my sewing plans, but at least I had a good book to read. As it turned out, the city had it all repaired and the power was restored by 11:45 a.m.! YAY!!

So, the first thing I did this week was to sort my tons of green scraps. The Rainbow Scrap Challenge color for May is dark green (hunter, forest) and sage. Sage isn’t that dark necessarily, but leans more to the gray side (as opposed to olive, which has more yellow). 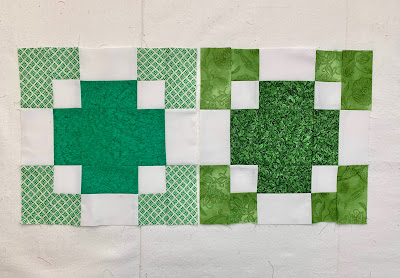 I’ve found that many of my blocks (strings, crumbs) benefit from a combination of dark and light or bright greens together. So, in addition to doing dark versions of my usual RSC blocks, you may see me adding in some brighter “kicker” greens into those. Heaven knows I probably could sew with green scraps for three or four months straight and not get through them all! 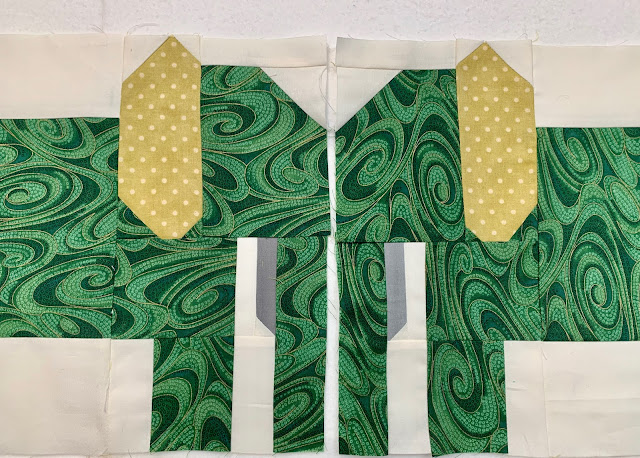 First came the swirly elephants with polka dot ears. One has vertical swirls and the other has horizontal swirls. Must be a gender difference (wink).

Next, the stately older elephants ambled in. How can we tell they’re older? Well, obviously, they’re made of Civil War (reproduction) prints! 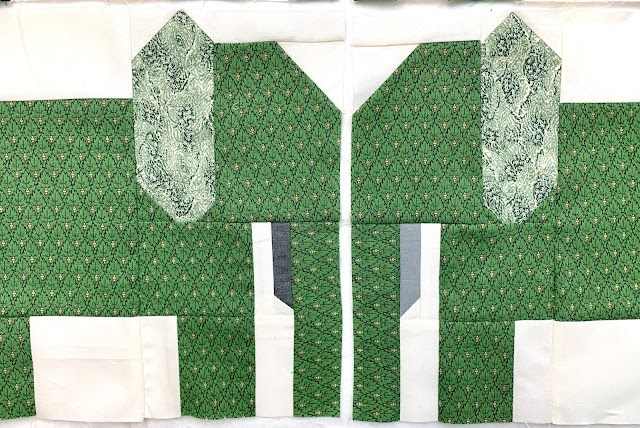 And then bringing up the rear for this week is this lovely young lady. She doesn’t know if she’s coming or going, because her scrap directionality is a bit mixed up. But that’s what happens when you have to work with a limited size scrap! The herd doesn’t mind! 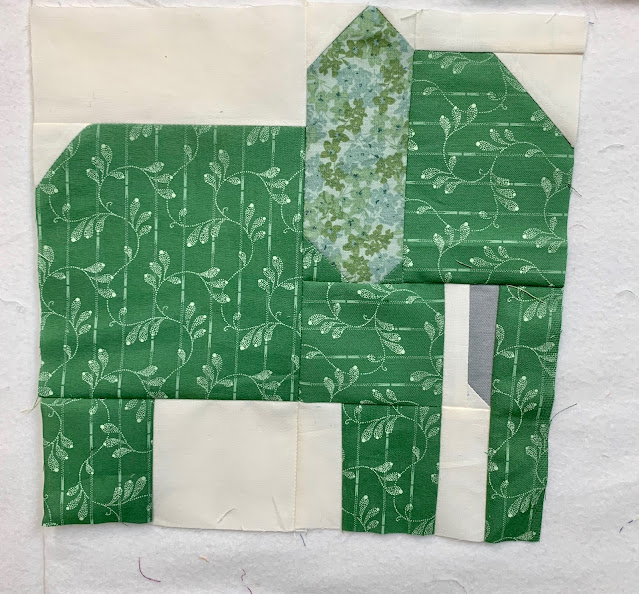 These five elephants represent only one third of the dark green herd. 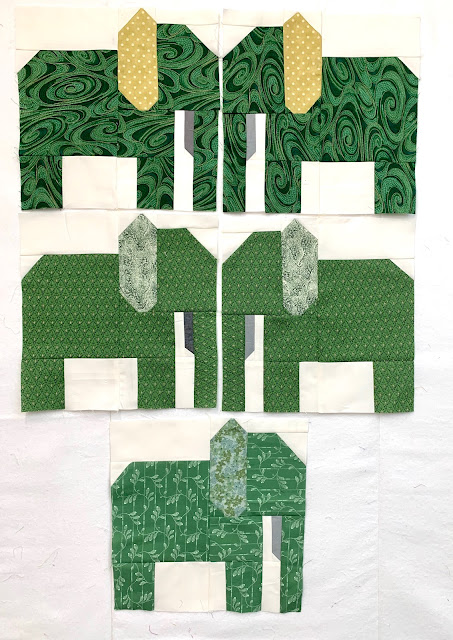 Why so many? I’ll explain my plan in more detail next post. I have a wonderful green and blue foliage print that I’ll be using for two green and blue elephant quilts. I’ll also be making some trees to go along with the needed 12 elephants for each of these two quilts. Then some of the other ellie quilts will need greens, too, but those will be made when we do the light and bright greens.
The Hearts for Ukraine quilt top got its final borders this week. Here it is up on the design board. 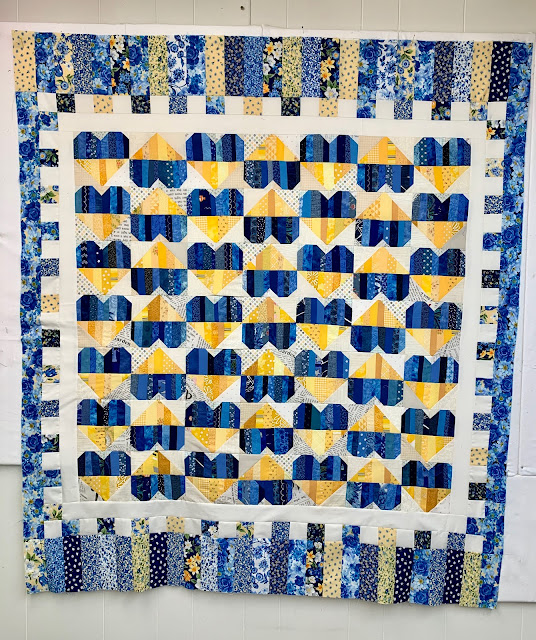 It measures 54x65” and is perfectly square. I promise. It looks wonky because it’s pinned at the top and just hanging below because my design board isn’t long enough. And heck, I can’t even pin it straight! Or take a straight picture. It is what it is! 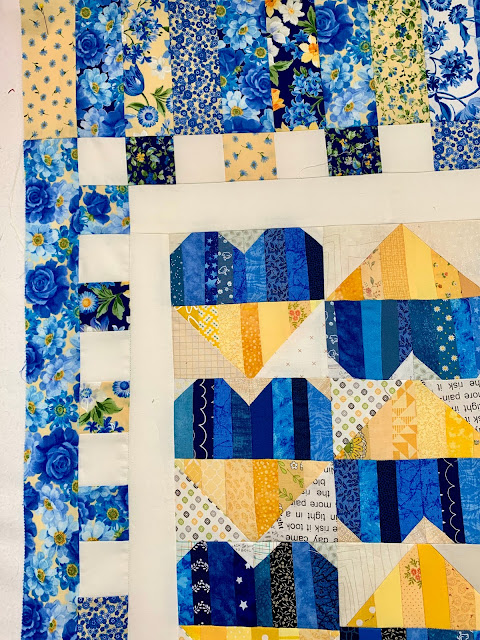 I’ve prepared a backing, and now it is ready to be sandwiched and quilted. That’s now two larger quilts (the other is my Zipper quilt) to fit in somewhere between the four little green quilts for QFK that I’ve pulled scrap “kits” for. Oh, and then there’s the Squirrel project. 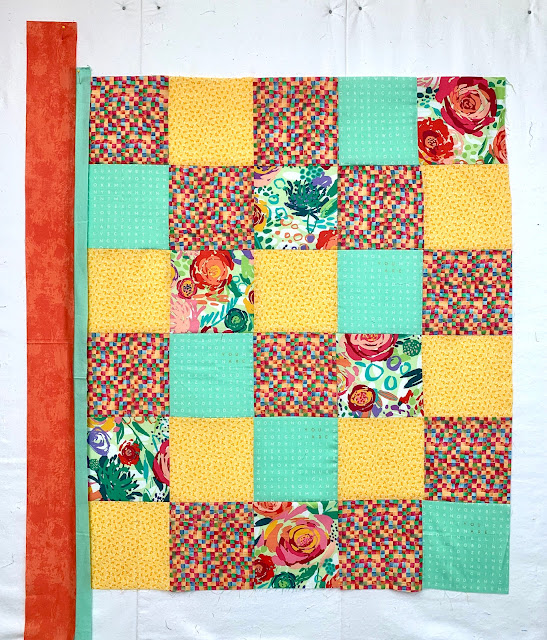 My friend Virginia from Quilts for Kids had me over this week to pick out some scraps from her horde! Seriously, as a Board member she is constantly sewing quilts and making kits for the masses, so she is a “front-line” processor of donation fabric and scraps and purchased yardage. I’m lucky to be able to use her as a resource when I have to match something or when I need more wild fabric to cut up for the Zipper kits.or when I just need a fresh scrap fix…
So in the above flimsy, she had given me the floral fabric and the multi-colored checked fabric. I was going to cut them up for Zipper blocks, but they looked so good together. So I pulled out some matching yellow, green and orange fabrics and ended up having enough of them all together to make another little quilt top! SQUIRREL!! 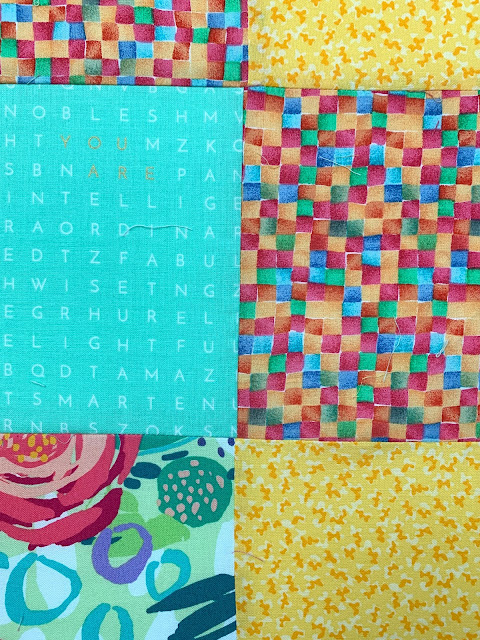 These colors aren’t showing true on my camera or monitor, but trust me - this is one happy little quilt! Or it will be when I get the two borders sewn on!
Next week we’re finally getting a spinner knob installed on the steering wheel of our RAV4 so that Bruce can drive. You may remember that he had to have his right arm amputated two years ago. Spinner knobs are only legal (at least in this state) on vehicles driven by amputees. I’m not very excited about this because Bruce has always been a Mr. Magoo-type driver. Seriously, he’s fine if he’s taken his ADD medicine. That’s the only condition I laid down.
I’m not sure if I’ll be here to join in next week with a Saturday post. My son Ryan and I are flying to Seattle on Thursday and won’t be back until Sunday night. My daughter Megan is having surgery, and we’ll be there helping out her and Ted for several days. I’ll try to get a post ready before I leave, but we’ll just have to see.
Have a great week!