This was certainly a green week! Until Sunday evening, I was in Seattle (very green and rainy), helping out my daughter post-surgery. She is doing well. Son Ryan and I flew home that evening and got home late. On Monday the day was filled with unpacking, laundry and working in the yard (mostly flower bed clean-up and weeding). I haven’t planted any of my flower pots yet this season, nor have we even cleaned off the patio and set up the furniture out there. It’s just been too cold and damp. But the veggie garden is planted with peas, spinach, potatoes, squash, cucumbers, tomatoes, peppers, pumpkins, onions and carrots.

On Wednesday our new bed was delivered, so we wrangled the new sheets and bedding onto it. The cats were a bit freaked out at first, and we slept fitfully the first night. But since then we’ve been sleeping like babies and the cats enjoy “their” new bed too.

Some sewing took place in small spurts for the first few days home, but once I felt settled again, I was a Sewing Fool! No new elephants were sewn this week, but the final four green ellies are cut out and will be sewn this coming week. I did, however, finish up these ten green framed four patches. 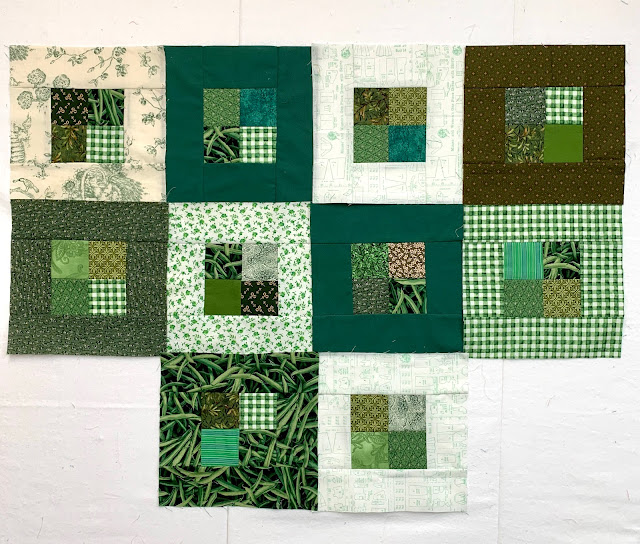 And then the strip and string sewing began. I’ve learned over the years that string blocks in green are much more interesting if the diffferent values of green are mixed. So with that in mind, I combined all my green strings, which are admittedly heavier on the darks, into these 37 six-inch blocks. 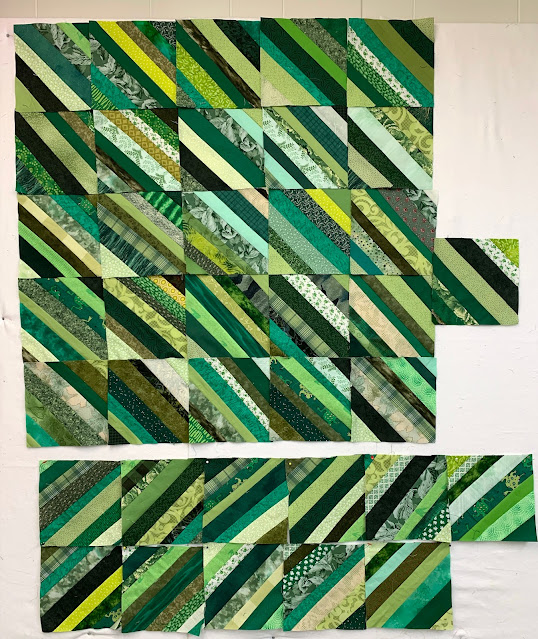 The blocks at the bottom have a sheer fabric base (think sheer curtain fabric, likely a polyester or other synthetic. I was gifted a roll of it years ago). The upper grouping was pieced on old phone book pages. I’m running out of paper, so I’m back to using the synthetic until I can find more phone books! Anyway, when the light and bright green month for the Rainbow Scrap Challenge rolls around, I’ll likely have plenty more green strings to make more string blocks then.

One of the things I did that’s new for me this month is sew STRIPS of green together. I define strips as being 2” or more in width. In this case I gathered strips in medium to dark greens that were at least 20” or more in length and sewed them together lengthwise into strip sets of six to seven. Then they were cut into 6.5” widths with the intention of using them in a coin quilt. As it turned out, I had enough to do a strictly green coin quilt!

The following picture shows the green strip sections pinned roughly on the design board with the fabric strips I plan to use as sashing. It’s NOT yet sewn, so excuse the wonkiness; this is just to get an idea of that it’ll look like. 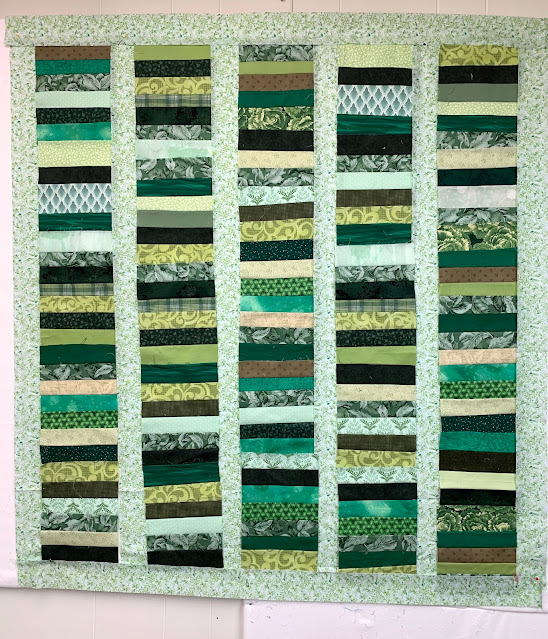 It’ll need a bit of layout tweaking, and that’s a project for this weekend. I also got this little flimsy sewn up and plan to get it backed, basted and quilted this coming week. The Flower Fairy panels (which I used to own some of myself and used in my Crazy Quilting) were gifted to me a couple years ago by my friend Angie. 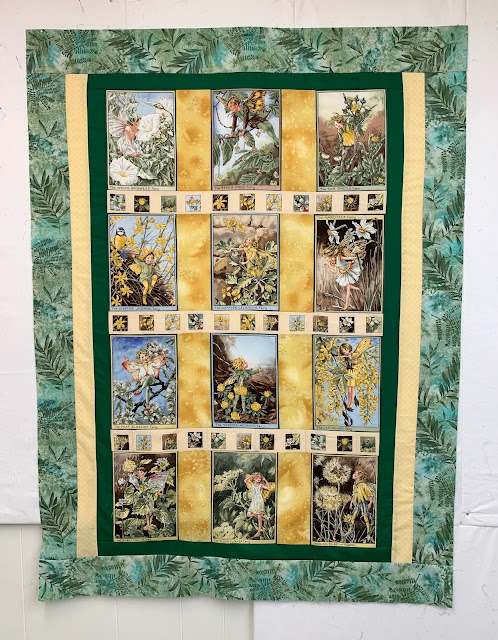 So, that’s what’s been happening over the last week. Cousin Kim will be coming over tomorrow, and for the first time in three weeks we’ll be sewing and playing with our jigsaw puzzle in progress. I can’t wait!

Have a great week!

Linking up to Scrappy Saturday at Angela’s blog for the Rainbow Scrap Challenge.