Some Finishes and a Rainbow Flimsy

Winter has definitely arrived here in the Salt Lake Valley. It’s been cold and we’ve had rain. About three days ago we even woke up to a dusting of snow. I say Bring it On! Let’s get plenty of snow over the next 2-3 months; good for the water supply, good for tourism, good for the winter holiday spirit. And then come March 1, it can just go away! ... um ... Do you think Mother Nature is listening? I’m not holding my breath.
So this past week, the stars aligned to allow me to get several projects finished. I love when that happens! The first finish was this four-patch posy quilt for Quilts for Kids. I tell you, it was pure bliss working on this project. I love the fabric and colors. It’s just so cheery! 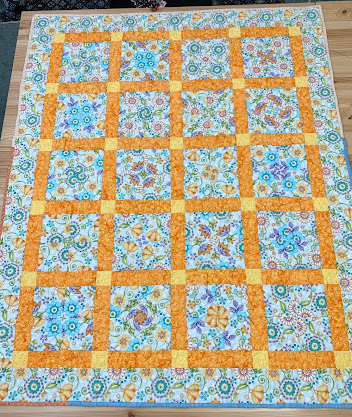 In the 20 main 4-patch blocks, I quilted a swirly flower. It’s one of my go-to designs. You can see it better from the back.  I also did a vine along the outer floral border and a loopy design in the sashing. 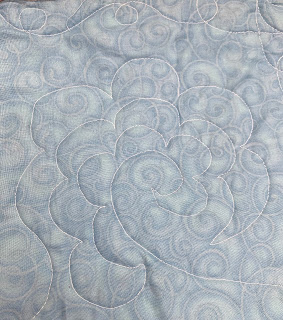 :
After laundering, the quilt measured 50x60”.
Last Sunday, Cousin Kim and I basted this large quilt, which I’m calling Bear Tracks because of the masculine Dan Morris prints of deer, bears and owls. Anyway, this will go to my daughter-in-law’s father, Bill. It’s the third of four Christmas quilts I want to get done before Christmas. 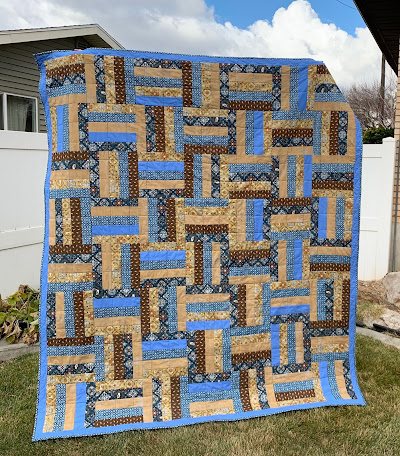 Bear Tracks measures 78x88” and was straight-line quilted at four-inch intervals. The outer blue narrow border was given a curled hook pattern. Simple, but echoed some of the same motifs in the fabric. Here’s the backing.  You can click on these pictures to enlarge them and see the beautiful fabric. 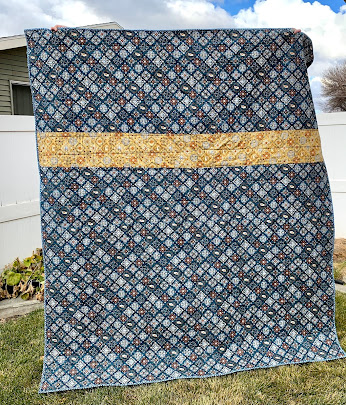 And then I remembered that before I could mail off my brother Steve's Christmas quilt (the panel quilt of the snowy truck), I had to finish the zip pouch I was planning for him. This was the last of the fat quarter of marijuana-themed fabric that I’d ordered earlier in the year. Previously I’d made Steve a mask out of the fabric, plus I cut two zipper blocks (one for Kim, one for me) out of it. And now, the pouch. Seriously, I think I eked out every last leaf out of that print!  The pouch is 7x10”, quilted with a small stipple and sports a green zipper. Green is Steve’s favorite color. 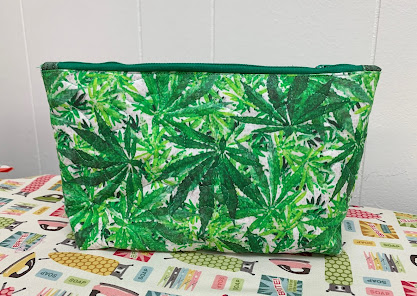 And speaking of Cousin Kim and the zipper blocks, let me show you HER zipper quilt finish. Mine will be pretty much the same (at least 80% of our blocks are the same) once I get it sewn together. Isn’t it awesome? It looks like it’s just glowing!! Kim is giving it to her son Nick for Christmas. 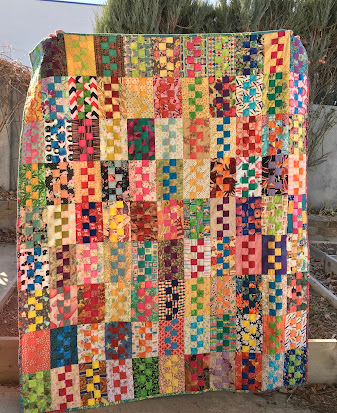 So, those are the finishes. Next, I played with strings and made another couple dozen multi-colored string blocks. But you don’t need to see a picture of those, because after you’ve seen a few dozen (like last week), you’ve seen them all. I’ll just keep working on them until my string bin looks depleted. Hahaha - as if.
I also took a few moments - and it was literally just a few moments - to sew together this Scraptastic Star flimsy.  With the 12 sixteen-inch blocks, it measures 48x60” and will be a great quilt for Quilts for Kids. I made these blocks all year as one of my Rainbow Scrap Challenge projects. It’s high time I begin sewing some of the blocks together into tops, eh? 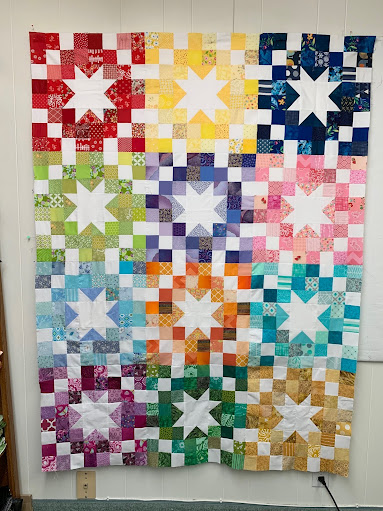 My plan is to get Scraptastic Stars, along with the gray and orange scrappy column quilt (seen in progress  here) basted and quilted. I just realized that I’ve never shown that finished gray and orange top. Well, no matter. Hopefully I’ll have the finished quilt for you next week.
I received a surprise package from Sally this week. How sweet of her (I bet she hates me saying that) to gift me with a yard of this delightful Gumby and Pokey fabric. I was so excited that I wasted no time in pulling some potential matching strips from the QFK scraps for it. I’ll probably do something quick and easy with it like the third quilt on this page. 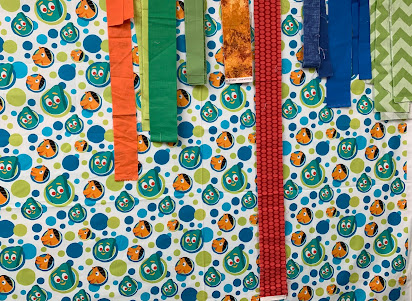 And then not to be outdone, Molly Kitten (Sally’s supervisor), sent three bright and happy cat fabrics to Darla. I have no idea what those two felines are cooking up, but you can bet you’ll hear about it here. 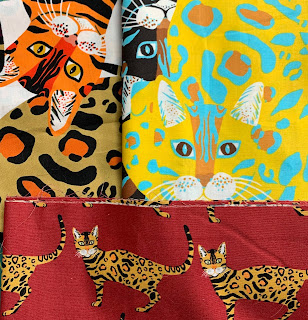 Finally, I’m about to start the fourth of the four Christmas quilts to sew this year. This final one is for my son, Ryan.  I saw this line of fabrics at Connecting Threads and it just hit me how perfect it was. I bought a 10” square pack and lots of yardage. That’s not something that I often do, but it was during the time I was reading a draft of Ryan’s book manuscript, and the colors and prints just leaped out at me and said “Arahorn!”. Maybe someday I’ll explain that more. Anyway, the fabric must’ve been popular because it was GONE within a week or two. Now all the decisions have been made and the pieces are cut. Let the sewing begin!! 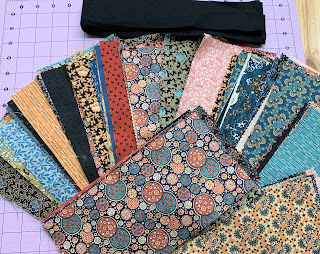 We had a wonderful, quiet Thanksgiving here at home this year. Except for last year, that’s what we usually have done over the last 10-12 years anyway. We  did talk or text with most of the family during the day. Then for a mid-afternoon dinner I made a wonderful turkey and dressing casserole, using Melody’s recipe, here. I didn’t get a picture, but if you check out the link, you can see it. Seriously, if you’re wondering what to do with your leftovers, or would rather just cook an easy turkey dinner next time, I heartily recommend this “turkey lasagna” without reservation. We added a bit of mild Italian sausage (and celery and onions) to the cornbread stuffing mix. It made enough for three dinners and a lunch. Anyway, we also had green beans from the garden and pumpkin pie for dessert. A simple, perfect day.
Posted by Cathy at 8:48 AM