Scraps: To the Moon and Back!

How does a sixty-something woman have fun during a pandemic? If she’s a quilter, she would play with fabric. And that’s just what I’ve been doing - playing with fabric of the scrappy variety.  It started last Saturday with me asking our Quilts for Kids leader, Sandy, if she had any orphan blocks or some scraps that I could take off her hands. When she stopped laughing, she said they were drowning in scraps because no one wanted to work with them. So, I volunteered. On Sunday she texted me asking what time after 3:00 on Monday could I swing by to pick some up. My reply: 3:01.

Long story short, Sandy kept bringing out scraps, and we took two boxes of scraps and a large bag of blocks out to my car. She said there was twice that much left (something to look forward to)! I didn’t get a picture before I began digging in because I totally forgot.

The first thing I did was to pull gray strings out and add them to my own pile of gray strings. I’ll personally be working on my dark neutrals (gray, black and brown) for the remainder of the year for the Rainbow Scrap Challenge. Last Sunday I started a gray-with-red-accents string quilt to use up my gray strings. 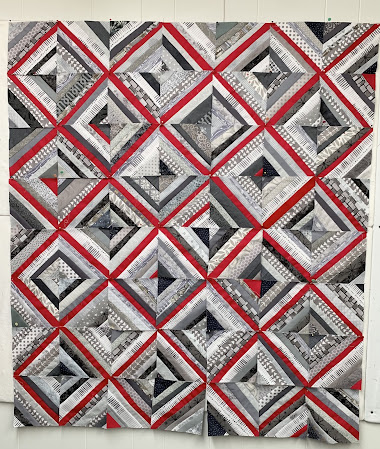 With the addition of the new strings, I was able to piece 56 blocks at 6.5”. When sewn together, the inner portion of the quilt will measure 42x48”. From there I’ll add a 1-inch red stop border and then find some gray either in my wider gray scrap strips or yardage to make an outer border. It should finish in the neighborhood of 50x56”. My goal is to finish that in the coming week, as well as to get the top sewn on the third Christmas quilt (the blue and brown rail fence blocks). It’s a tall order, but there are no doctor appointments scheduled for next week and the weather is supposed to turn cold and rainy. Sounds good to me!
These five experimental triangle blocks were actually the first ones I sewed, but they didn’t do it for me. And the angles didn’t work with the string blocks, so they’ll end up on the back side of the quilt instead. Once I decided to “kick them off the island”,  I instead added a few random additional red strings and corners in the string blocks to give a little unexpected color here and there (see above photo). 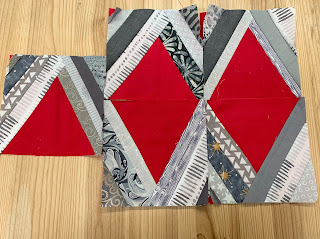 At our next QFK workshop sometime in the first quarter of 2021, we’ll be doing zipper blocks. Again, I volunteered to teach the block and kit up the parts. Here is a pile of those pinned kits so far. 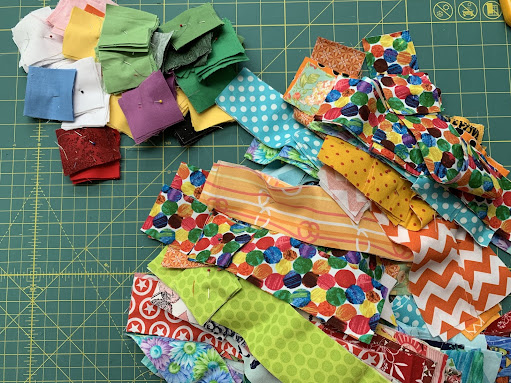 The pile of strips on the chair are zipper blocks still to be cut and kitted. The box of scraps (only one now instead of two) is what’s left after I’ve pulled all the fabric chunks, solids to be cut into squares or 2.5” strips, and scraps I added to my stash (for my RSC block-making, which get made into quilts for Quilts for Kids). 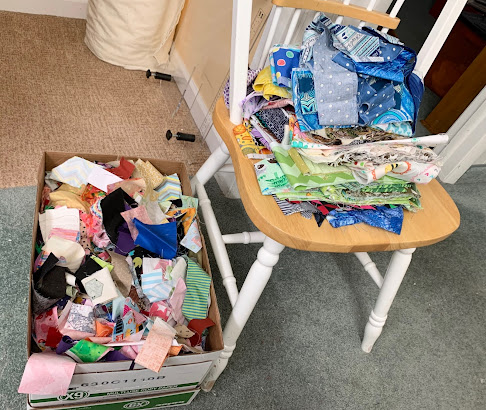 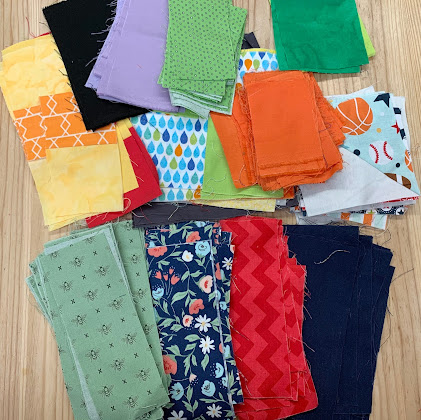 Above and below: color chunks that may have been intended for a project. Whether intended or not, they should make up into nice little quilts with a little help from my stash. 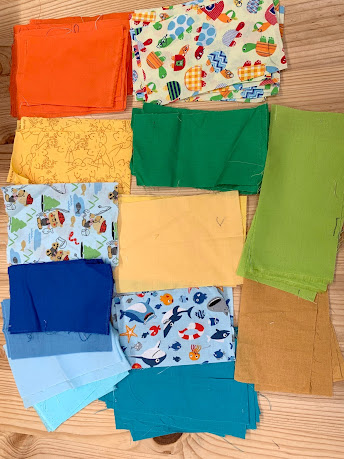 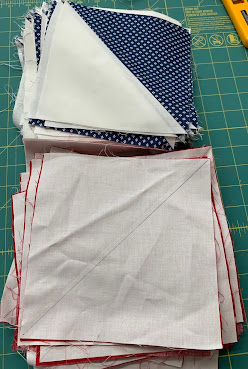 Large HST’s in navy and red for a potential quilt 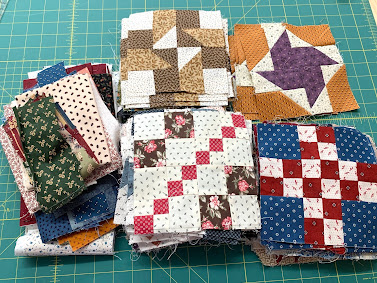 Civil War blocks and scraps. There are more than enough blocks here to assemble a quilt. I did finish off the four in the upper right. Will need to get some appropriate sashing for these as the bulk of them were made in groups of four, and that’s how I’ll set them. 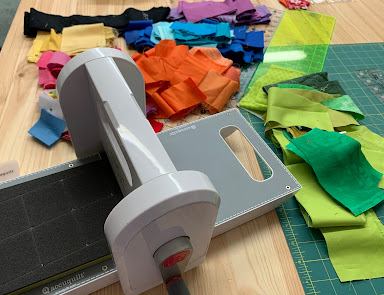 Solid strips (less than 2.5”) and chunks to cut into 2” squares for zipper blocks. My Go Baby cutter will help with this. 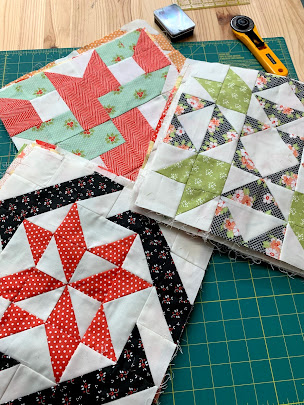 Nineteen finished 12” blocks from an apparent Fig Tree (Joanna Figueroa) quilt-along. The 20th block, below, needed some serious disassembly, but I’ve got the scraps to re-piece and fix it. It will complete enough for a good-sized quilt. I gave the remaining scraps and block bits to Cousin Kim, including at least three fat quarters.

There’s plenty more, but I don’t need to show more to give you an idea of the scope and depth of these scraps and their potential projects. And then there are my three drawers of dark neutrals that I’ll continue to tackle.
The gray drawer of scraps, below, is what’s left after the gray strings were used for the string quilt, above. 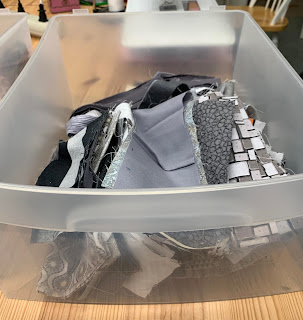 I have plenty of black scraps to wade through as well... 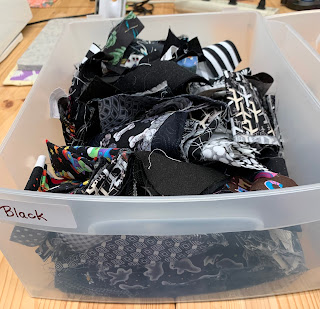 And let’s not forget the browns.... 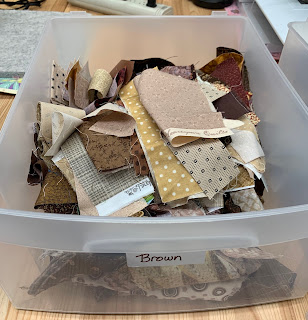 So, yeah, I’ll be busy planning and cutting and sewing. And my trusty companion, Darla, will be there to oversee all the goings-on. 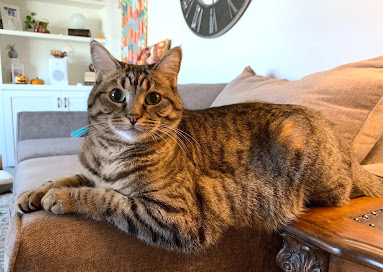 She loves to lay in my lap while we watch Kitten Academy on weekday mornings. The squeaky kittens intrigue her, but we’re both glad they’re just on the screen and not underfoot paw. 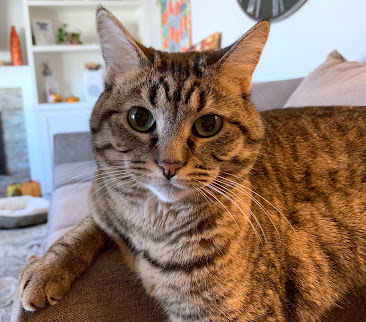 (Updated) And we are dancing with joy that Joe Biden has been elected the 46th President of the United States. And Kamala Harris as VP - OMG, it’s so exciting!! Unfortunately, Donald Trump, true to his (lack of) character, will make the transfer of power as ugly and divisive as the last four years have been. Hopefully, we’ll hear less and less of him as the months go on. One can always hope.