Scraps: To Mars and Back!

Yep, last week it was to the moon and back with scraps, but this week it’s to Mars and back. Two more bags of scraps were delivered to me from another Quilts for Kids board member. These scraps, all things that have been donated to QFK, include several quilt kits, more blocks of all kinds and copious leftovers and chunks from others’ projects. To say I have enough to keep me busy for a few months is an understatement. I’ll probably be sewing my way out from under it all for a couple years or more.  But what fun it’s going to be! All the resulting quilts will be donated to Quilts for Kids, of course. 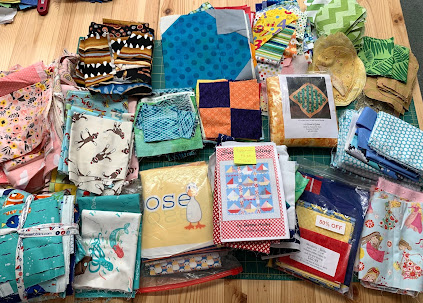 Last weekend when Cousin Kim came over to sew on Sunday, we basted her zipper quilt. It’s going to be a Christmas present for her adult son, Nick. So it was a priority this week for me to quilt it. I just used a serpentine stitch with my walking foot and quilted all the sea lines between the blocks. 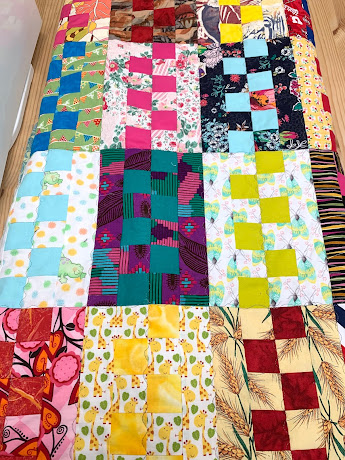 I love the zippers so much! Now I can’t wait to get mine sewn. Kim and I used a lot of the same scraps, so probably about 80-90% of our quilts have the same blocks, though often with different solid accents. My zipper blocks are waiting, drumming their little zipper fingers, to be sewn together. Next year, babies!

Later in the week I finished sewing the gray and red strip blocks together and added a red border. Apparently the red Kona fabric bolt that I bought this time is a slightly different shade of red than the previous one. You can see that the border is a bit darker. But it’s OK I think. 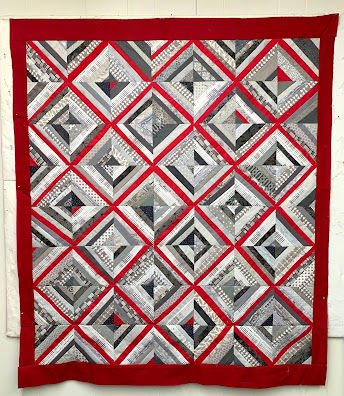 Now here’s a strange shot of the backing, just pieced together. It’s not trimmed or pressed yet, but you can see that I incorporated those five red triangle blocks into it. 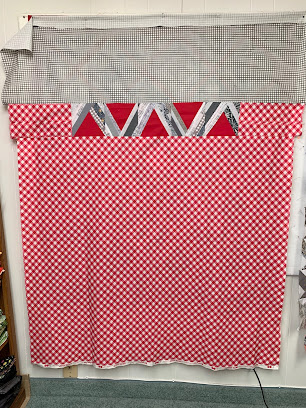 Here’s a closer picture. The next step will be to press everything well and get the whole thing basted. 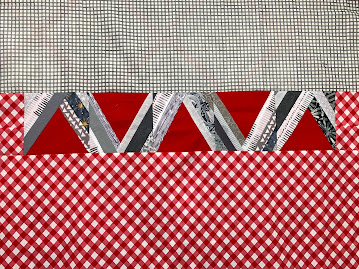 I also worked to finish this flimsy. All 56 rail blocks are now sewn together and a blue stop border has been added. I was going to add another wide print border, but I think this is plenty large as is. It currently measures about 73x83”. Adding the 4” border I planned would’ve made it 81x91”, and I don’t want to wrestle with that bulk under my DSM’s little throat space. 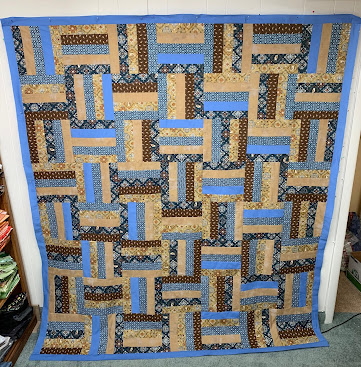 So this one is ready to be basted now too. I’m going to have to have a quilt-sandwiching marathon this week, as I have three of them to do (the third one being that orange, yellow and blue 4-patch posy quilt top).
Did I say three? Make that 4, because the flimsy below is almost done, too. Two more columns and a couple vertical strips, and this one will be ready to go! This is what I worked on with my gray scraps this week. I’m linking up with Scrappy Saturday, as many of us are trying to put our dark neutral scraps to good use. 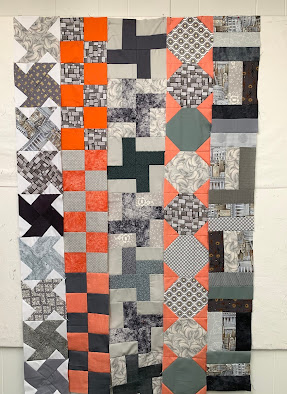 The two remaining columns will be a nine-patch on the right side (with an orange center piece) and a 6” zipper block (with orange added) on the left. The finished width will be 48” and the finished length will be 56”. Some of the rows will finish at 54” in length, but I’ll add a 2” coping strip at the bottom to even it up. And that means that maybe next week I can begin tackling some black scraps. I have a couple ideas swirling around!
Bruce finished up his “quick and dirty” strumming arm this week! It’s so good to hear him strumming the banjo and guitar again! His prosthetist, who built his regular prosthetic arm and the end portion of this device, is building a more formal arm to replace the black and gray tubing. But that process takes awhile, so Bruce rigged this up for the interim. 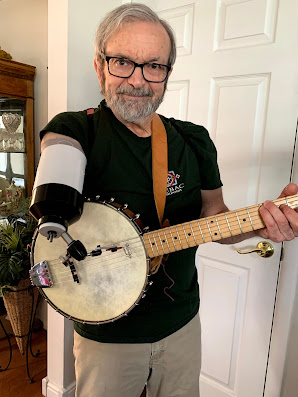 We’ve had rain and snow this week and are enjoying evenings with the fireplace on. And the kitties are enjoying it too. Here is Darla in her bed. 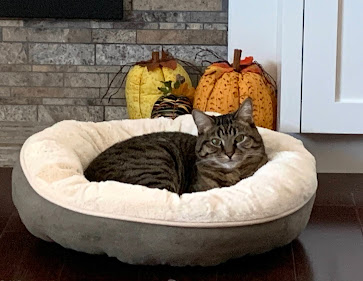 We have a heated bed for Alfie, too, but he won’t go in it. Such a cat! He prefers Bruce’s lap.
And that’s about it from Chez Kizerian for this week. I can’t believe how the time is flying by all of a sudden. Now that the election is in the history books, we look forward to Thanksgiving. But “looking forward” is not really the correct expression, because we, like many others, will be spending it by ourselves. Covid is raging, and we'll be staying home and staying safe. The hospitals here are at capacity, and that seems to be the story across the country and in Europe. Have a wonderful week!