Summer is Zipping By

I’m glad July is a long month, because this summer is zipping by. Remember how S.L.O.W. the days seemed in March and April, when we were first quarantined for the Covid-19 pandemic? It felt like April was five years long. That was probably because it was not only a marked change in routine for most of us, but also because the spring weather (at least in the Northern Hemisphere) was cold, cool, rainy, rinse and repeat. Indoor weather. Now with summer in full swing, at least we can change up our routines by sitting or working or visiting outdoors in the mornings and evenings. And if family or friends drop by, we can visit with proper social distancing in the sheltered green shade of the patio and grape vines with the fan blowing cool air on us. It really has been... dare I say?.... nice!
I did get a lot of sewing time in this week, which was really enjoyable. Although I do get out one or two mornings a week to keep on top of the garden chores, the great majority of my free time is spent sewing. Our local quilt shop is resuming our Block of the Month meetings this weekend, but I don’t feel comfortable sitting in a room with a lot of other people, even if they’re masked and numbers are controlled. There are only 2 months left of this BOM class, and I’ll just do my thing to finish off the sampler blocks we were making. They’re going to end up being 2 quilts that’ll go to charity, so it’s all good.
So, I’ll be linking up with Rainbow Scrap Challenge this week (and perhaps a couple others if I can remember!!) to share my scrap progress for July’s work with medium and dark blues.
First up, I made these 12 Twin Sisters blocks. 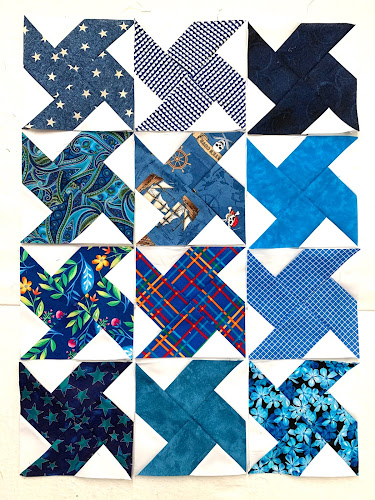 Next up was a dark blue Scraptastic Star block. This makes 7 of the 12 I need for a quilt top. 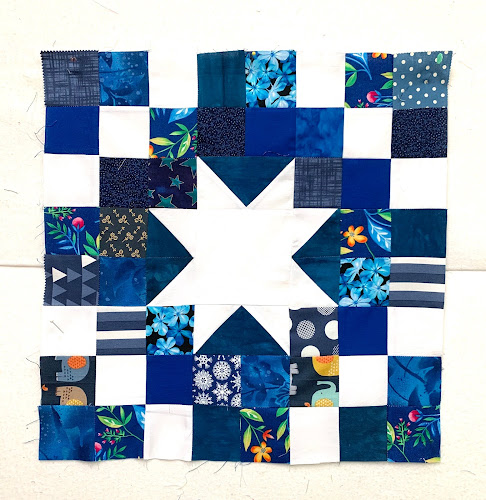 And then there were the Split Nines. I made 18 of those. I’m going to have to sit down and come up with a plan for these. 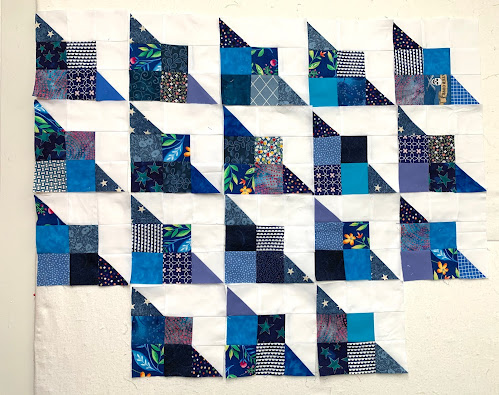 And here is the ZIP in the zipping-by of summer: my weekly Zipper blocks. These first five are done in the dark blues of the month’s color.  I know I keep saying how fun these are to make, but it’s true! 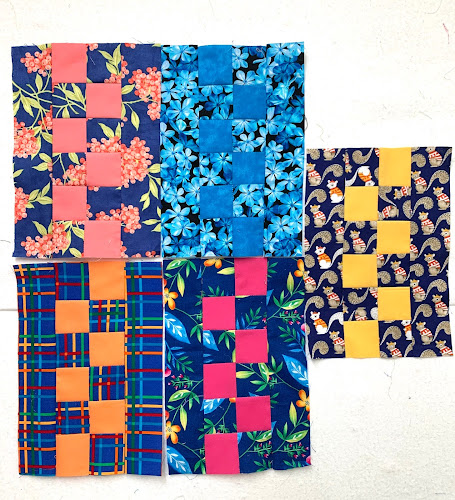 And then I made five more in random colors and fabric. Now, there’s a bit of a story behind the top two blocks in the picture below. My friend Sally sent me some (as I call it) Va-Va-Voom pinup girl fabric as a joke to see what I’d do with it. Well, naturally I had to make zipper blocks from it. I made two of them - one is a Rated G block of hearts and nondescript parts. The other is more, shall we say, salacious. Hahahaha! One will go on the front of the quilt (where I’m trying to make no two blocks out of the same fabric) and one will go on the back. But which will be which? 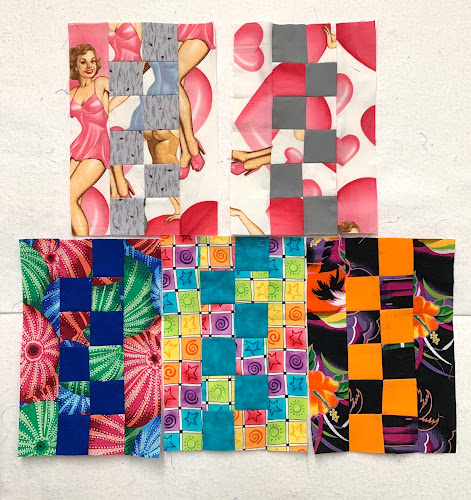 This zipper quilt will be a keeper, so it could go either way. I’m leaning toward the risqué one on the front, to remind me of Sally’s mischievousness.
And that subject reminds me of the conversation Sally and I had this week. When Bruce has long appointments at the prosthetist, Sally and I will sometimes chat on the phone to pass the time. This week we were coming up with arm attachment ideas for his robo-arm-in-the-making. It started off with a blender attachment and devolved hilariously from there. 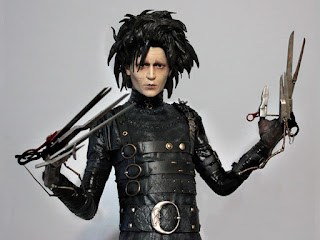 When I told Bruce about it that evening, he laughed and came up with one or two on his own. Curiously, and I may have mentioned this before, Bruce used to work (and remains friends with) a man named Jon Price. Jon used to live and work in Hollywood, where he worked on various movies and actually built the hands for Edward Scissorhands. The hands were designed by Stan Winston, Jon’s boss, but Jon had the creative license to actually build them. Naturally, the credit all goes to Stan Winston, but Jon Curtis Price is at least mentioned in the movie credits. But once again, I digress...
I also managed to piece all the parts for a scrappy tote bin. That will get sewn up this weekend sometime. 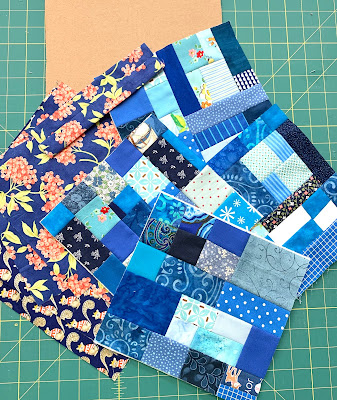 And here are my pineapple blocks. I sewed two per day and have 22 out of the 24 completed! 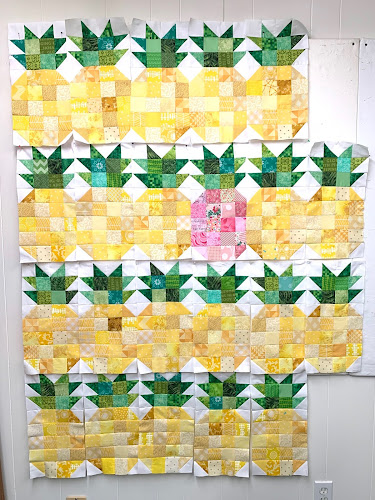 In the coming week, my goal is to get the last two blocks made, sew the blocks into a flimsy (top), and get it layered and basted. I also have a panel top for Quilts for Kids that I’ll get basted, since I tend to baste in batches these day. So those two quilts, along with the scrappy blue tote and more Zipper blocks, should keep me hopping this next week. If I have time, I’ll also tackle my blue strings and begin sewing those into string blocks. Hopefully then I can start thinking about my final blue scrappy project, the Creature Quilt.
I’m late posting this morning because I was out harvesting lettuce, spinach and peas this morning. I also took a lot of garden pictures and will include a few here to show how much things are just exploding in the garden beds! 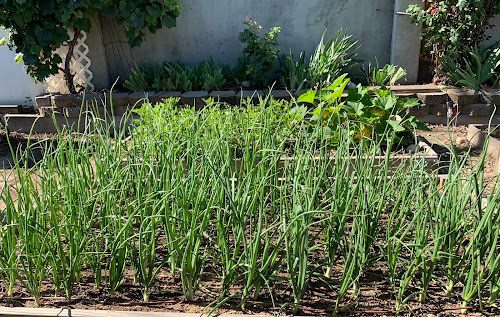 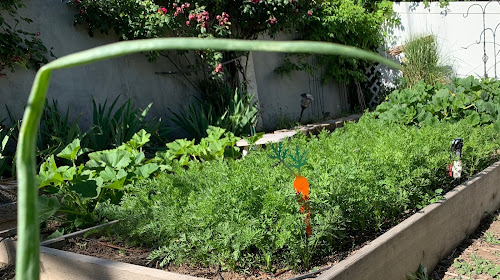 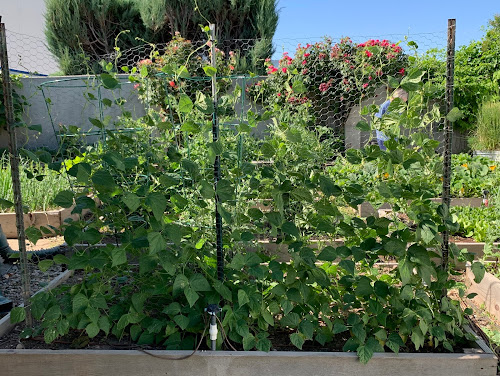 Bruce and the Beanstalks 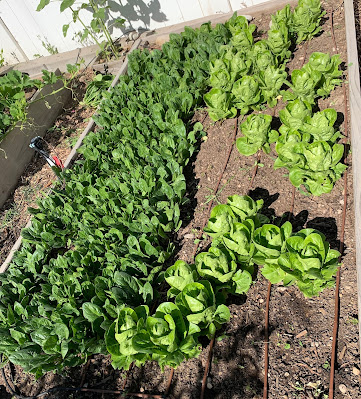 Spinach and lettuce (what’s left, lol)
Well, I had several more pictures I was going to post, but Blogger will not upload them. I’ve tried restarting my computer and still no luck. So, I’ll sign off for now. If Blogger will deign to cooperate in a day or two, I’ll try again. Have a nice week, friends!
Posted by Cathy at 11:51 AM