Yee-Haw! Rounding up Some Different Scraps

On Saturday I attended our monthly Quilts for Kids workshop for the Salt Lake group. Once per quarter we have a scrappy workshop, and that was this month. It’s always so fun digging in the barrels and using some of the group scraps to make blocks and things.

I was introduced to a new pattern for a 12” block made from pieces that were cut 1.5 by 3.5”. I didn’t get a picture of the blocks I finished, but will make another one here some time and show it then. I also got a wild hair to sew a jelly roll quilt as there were 2 packs of civil war-color reproduction fabrics. Those are totally not my jam, but I was itching for something different. And since I tend to live life on the wild side (haha), I got a good way through that project too.

As we were packing up at the end of the workshop, our leader, Sandy, came up to me. Now, she has seen two of my mash-up scrappy quilts (Little Orphan Scrappy and Creature from the Green Lagoon) because I turned them in to QFK as donation quilts. She had a bag of cowboy/western-themed scraps and said she thought they’d be "right up my alley”. A quilter had died and her family had given us the scraps - remains from at least two western quilts plus four completed blocks. Sandy wanted to know if I’d like to play with them and see if I could make a quilt. Sure! It sounded like a fun challenge.

Here are the scraps that were in the bag. The colors were oxblood red, dark blues, browns and beiges. The pieces were some 4.5” squares, some partial strips and other assorted small pieces. 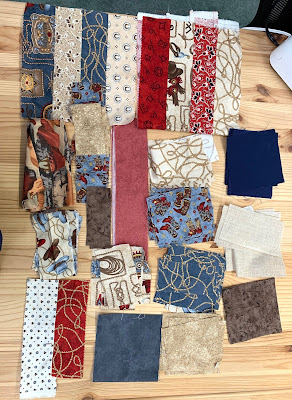 Additionally, there were four completed blocks and parts to finish a fifth (the lower right one in the second row), which I did straight away. Five down, seven to go. The blocks measure 11.5” unfinished, which is a weird size. The bigger fabric chunks are pinned along the bottom in the picture below.  The horseshoe fabric was a little over 2 yards long, but only 20” wide. I knew I’d have to piece the backing, too. 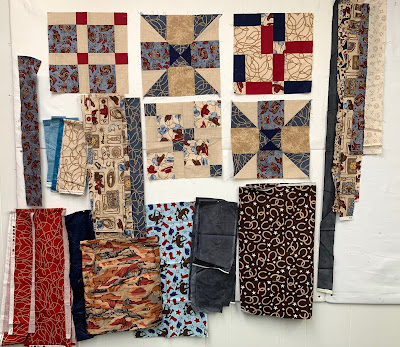 Once I got going, I couldn’t think of anything else. I made two blocks very similar to my Beachcomber blocks (second row, left and fourth row, right), by dividing up the 11” with a one-inch strip down the middle and piecing two halves of 5.5 x 11.5”. There were enough components for me to make two more Patience Corner blocks to add to the three already made. And that left me with one block of strip pieces and 2 final blocks pieced with chunks. 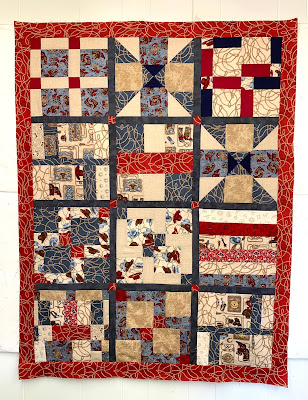 The color choices of the sashing, cornerstones and outer border (as well as many of the block components) were dictated solely by what was there and plentiful enough. I was so chuffed to get it all together on Monday afternoon! And the back went together well, too. I’ll baste and quilt it later this week and hope to have it done in time for my Saturday post. There are a few scraps (and that light blue half-yard piece pinned on my design board) that will go back to QFK at our next meeting.

Yeehaw! I roped and tamed those dogies scraps!

Now I’m back to my regular sewing, which involves all my leftover orange scraps and orphan blocks. I’m putting together another one-color scrappy quilt. Here’s a peek at what’s on the design board. This is another top that I’ll finish up, then baste, quilt and bind for a Saturday unveiling. It will be called The Creature from the Orange Grove..... 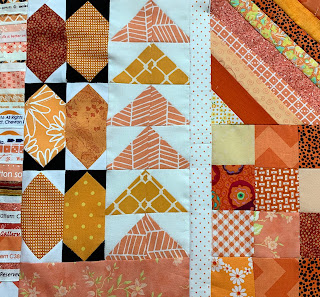 Although it’s almost a completed top, it doesn’t use up all my orange scraps. I’ve got plenty of other orange scraps that I’m holding in reserve to use with my purple scraps for another Creature quilt that is rumbling to be made when purple becomes the Rainbow Scrap Challenge color of the month. Muahahahaha....