Orange Scraps and May Garden Update

Although I showed some pictures in my last post of the spectacular weather last weekend, it’s turned cool and really, really rainy here. Did the Salt Lake Valley get moved to the Pacific Northwest while I was asleep? We’re in a 10-day rainy pattern, so the pictures I’m going to show of things in our May garden (later in the post) are cloudy and gloomy.

But first let’s talk about happy, sunny things, like the color ORANGE for the month of May in the Rainbow Scrap Challenge. There is nothing like a bright, warm color to lift your spirits when you’re sewing.  This week I made 12 anvil blocks that will finish at 8”. 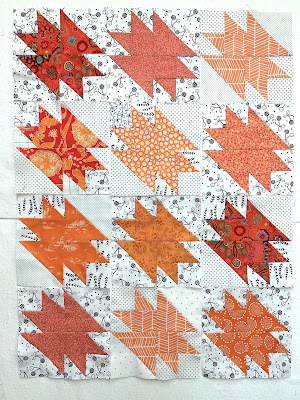 They are fun to make and come together quickly as you chain piece them.  I now have 41 of the 72 I’ll need to make a 64x72” quilt before borders (if I add any).

And finally I sewed my orange strings into these five 9” (finished size) string blocks. 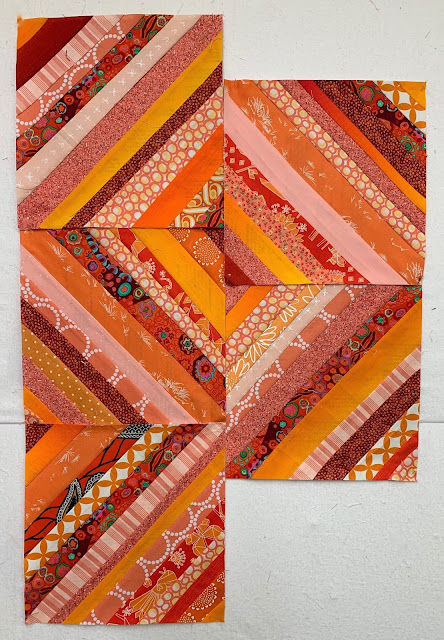 I still have my 9-patch variation blocks to do this month, as well as my bitcoins. And then, since I don’t need any more crumb blocks for my Crumbcakes quilt (which will be assembled and finished in June), I will start another crumb project. Stay tuned!

As well, I’ll be starting some International Sisters blocks. That may or may not be an RSC project, but I’ll definitely begin by sewing some of the ladies along with the rainbow color of the month. If you haven’t seen these blocks before (or even if you have), check out the free pattern on Preeti’s blog. She is not the originator of the pattern; it started out as an African Women block. But in the few years it’s been out, the original pattern source has been lost and links are broken. Formal attribution has cannot been made. I know Preeti really tried, and so did I. Therefore, since Preeti drafted it up, she is offering it free. Thanks, Preeti!

We did get to spend a beautiful, warm Mother’s Day out on the patio and in the garden. Bruce barbecued chicken and we had some family over (son Shane, DGD London plus her mom and other grandmother). It was really nice.  But after that, the weather went to hell in a hand basket. We’ve only seen (or heard rumors of) the sun for a few minutes a couple times in the last week. The rain is certainly great for the garden and it makes me realize we really need to get a rain barrel. But anyway, here are some pictures I snapped this week in the gloom.

Here’s the back corner of the backyard, which I’ve shown before. I missed getting a picture when the neighbor’s lilacs were crazy in bloom. Oops. But we’ve added a shepherd’s hook with a couple pots of flowers back here for some color. The hook we have out in the front yard is very heavy duty and holds a Talavera pot. This hook is of lighter scale, so can only hold two plastic pots of the store-bought petunia arrangements. It’s perfect for this corner. You can see the lettuce and spinach coming up in the garden bed there. And there are three various pepper plants at the near end of the rows. 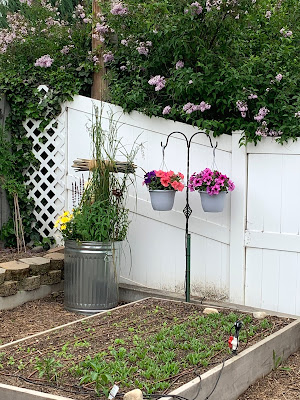 The rhubarb is going nuts and providing lots of stalks for Cousin Kim to make her pies and for me to make my strawberry-rhubarb compote for the year. The peas are well on their way. Bruce will string some string between the rebar for the peas to climb. 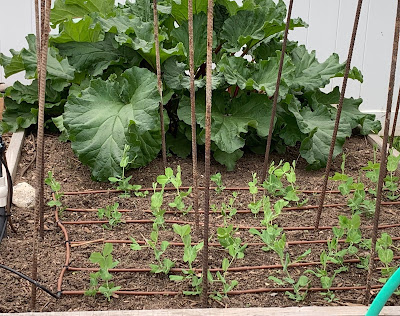 On the east side yard (where our driveway is), we have lots of irises. 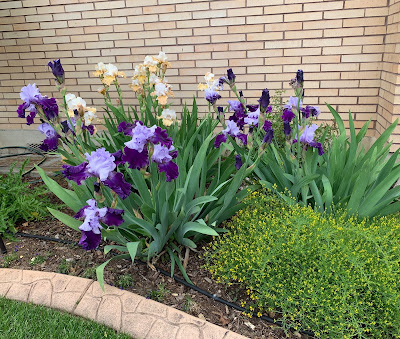 I don’t know what that other blooming thing is, but I think I bought it last year. I can’t remember. (I hope someone doesn’t tell me it’s a weed, haha!) 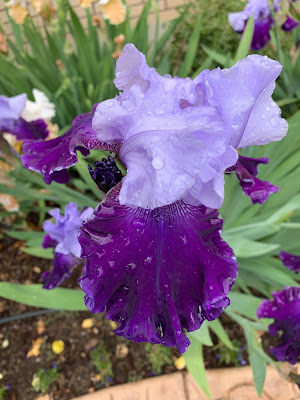 And just a little ways away, also on the east side yard but closer to the front, is this grouping. There are lots of little lobelia bunches planted in the bed along the inside of the curbing. That bush at the left by the chimney wall is the new burning bush that Bruce planted. There are more irises; they are sort of tucked away.That is a little nook where I plant the rhizomes I’m not sure of color-wise. Then I can further thin and transplant them to other areas. Our garden dragon guards them. To the very right is a dwarf Japanese Maple that can be seen from the front and the side along the driveway 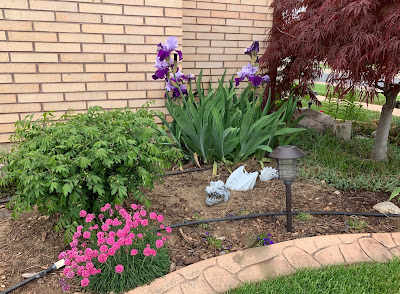 And our little poppy plant has bloomed! It looks like there is another bud about to open. We used to have a giant poppy here for a decade or more, but it eventually died. We replaced it a couple years ago with this very similar one and are looking forward to it growing!Isn’t that an interesting rock behind it? It reminds me of a pinto horse! 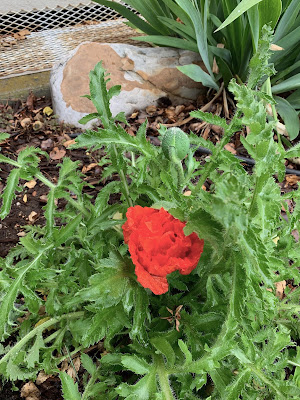 And finally, the front pots are planted and out. Keep in mind, these are early season pictures. Bruce just hooked up the drip irrigation lines, which we haven’t needed yet because of all the rain. Once the sun comes back out and the lines soften from the warmth, we can move them around a bit and tweak their positions to become less visible. 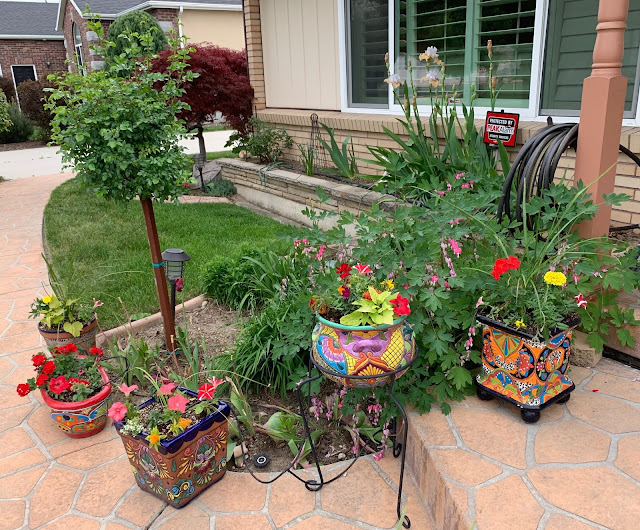 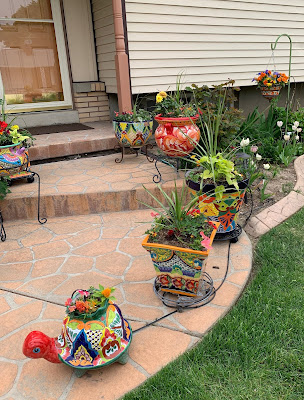 We got our two last new windows installed this week in the front bedrooms, but that’s a boring picture. But before the blinds go back up, one bedroom will get a wall repainted. It’s scratched up from the futon that used to be against it. I also removed the old valance and rod that was over the window to clean up the look a bit. The paint is purchased and waiting for us to return from my brother’s house next week. The other bedroom will get the ceiling painted, as well as the ceiling fan blades, the closet doors and the baseboards. Time to freshen things up a bit. We’re still waiting for the new back door and storm door for my walkout basement studio. Then we’ve got a few other little projects to accomplish this year. But it’s one thing at a time.....