Seven Flew Over the Cuckoo’s Nest

You’ve all probably seen or at least heard of the 1970’s classic film One Flew Over the Cuckoo’s Nest, starring Jack Nicholson. The title is actually based on an old rhyme about geese (for quilters, that would be flying geese, hehe)

So, this week in my sewing room (AKA the Cuckoo’s Nest), seven birds flew over. And all of them are in shades of dark blue (mostly), the color of the month for our Rainbow Scrap Challenge. If you follow the link to Angela’s Scrappy Saturday linky party, you can see what the other cuckoos, er, I mean quilters, are sharing from their nests! 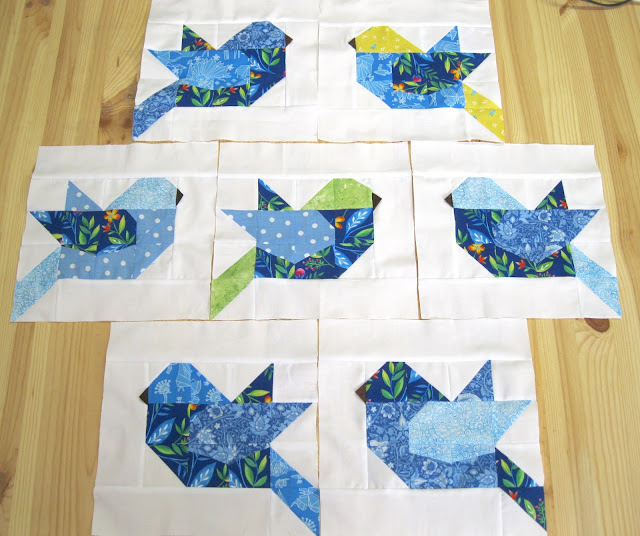 Since I planned for this quilt to have a preponderance (I love that word!!) of blue, and had only made two birds back when we did light blue in January, I had seven more to stitch up this month. Mission accomplished. Here is the entire flock of nine bluebirds, hanging out together.

They were a bit worried being out in the open like this, given that two felines (who shall remain nameless) live in the house. But we got the picture snapped and the birds tucked safely back into their work-in-process cubbyhole. 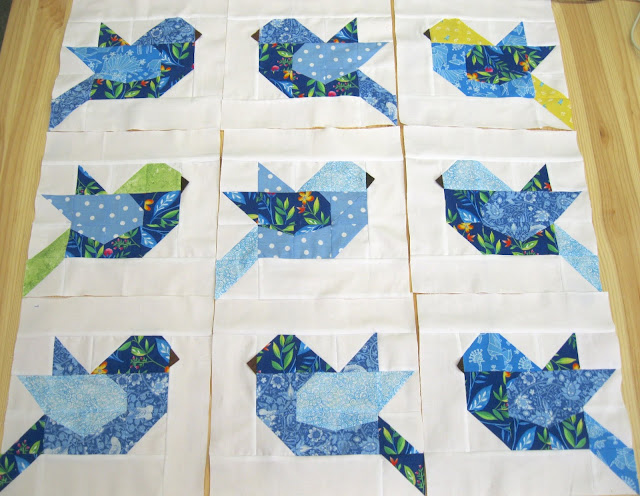 I’ve also basted the Orange Lozenges quilt (no picture) and started the quilting on it. That will finish up this week as well. And right now the design board has the second half of my bow tie blocks on it, so I’m hoping to get that flimsy pieced this week. No pressure. Gulp.

But getting back to this week, there was more than just birds flying out from under the needle. I sewed a replacement block for my Squared Away Sampler to match the first one, so here they are together. The wild and crazy one I showed last time is resting comfortably in the Parts Department. 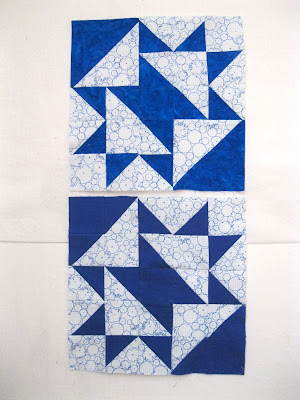 And then I laid waste to my blue scraps and strings by making twenty (20!!) of these 8.5” quarter log cabin blocks.  These are just so much fun to make! 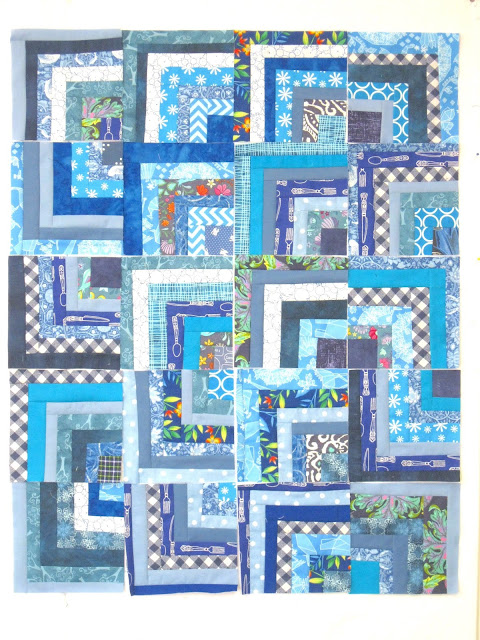 Right now I have all 120 of the planned blocks I think I may need for a quilt, but I’m going to go ahead and sew some more dark green blocks next month so I’ll have some color placement options. When all is said and done, any extras not used in the quilt will go into the Parts Department. I’m hoping that I can find enough good stuff in there this winter to piece together a Parts Department Inventory quilt.

And are you beginning to think of the projects you want to work on for the Rainbow Scrap Challenge in 2019?  I’ll have my crumb block project carrying over (working title is now Crumb Cake). And one other project is assigned to the lineup. But there are several more vying for a place. I’m trying to vary my projects by piece size (crumbs, strings, chunks, small squares, etc). And I need a project or two to help me use some light neutrals and black/white prints. So it’s a fun process to try to “piece together” a working plan, while tackling items on my Must Make or Bucket lists.