It’s been a crazy week.

My brother Steve arrived from Colorado to move his stuff. He came by Amtrak so he could drive a U-Haul truck back full of his stuff while towing his Model A on a trailer. The train was delayed before leaving and didn’t arrive until 2:30 a.m. on Wednesday morning. THAT was fun - driving into downtown Salt Lake at that hour to pick him up. Train stations aren’t usually located in the nice part of town. But we got home safely,  I got my sleep, and Steve has been loading his stuff up slowly but surely. Today, Saturday, should be the last loading day, and hopefully he’ll be able to take off tomorrow. He has help unloading on the other end. 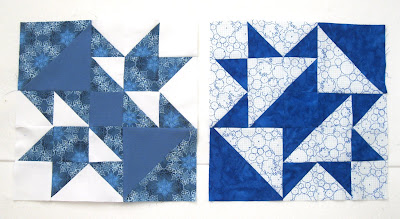 Bruce is working ComicCon (now called FanX) and doesn’t get home until 9-ish. That ends today, too, thank goodness. And since the commuter trains and buses run less in off-peak (non-commuter) hours, I have to take him and pick him up at the Trax station. Meanwhile, between running Steve around for errands and appointments, and shuffling Bruce, I’ve had precious little time for myself. But that’s fine - I was prepared for this week and its resulting chaos and messes. But not much sewing got done.

I did sew up two of the Squared Away blocks that Angela, our Rainbow Scrap Challenge hostess, and Mari of Academic Quilter  have cooked up for us.  After doing the first one on the right above, I started in on the second one. I didn’t like the lack of contrast in the fabrics I’d selected, so I just made it up as I went. The pieces are the same, but shuffled and with different shading to form a different pattern. I sorta kinda like it a tiny bit, but not as much as the original block. I may still do another blue block.

The Orange Lozenge top did get finished this week. It’s now awaiting its turn to be basted. 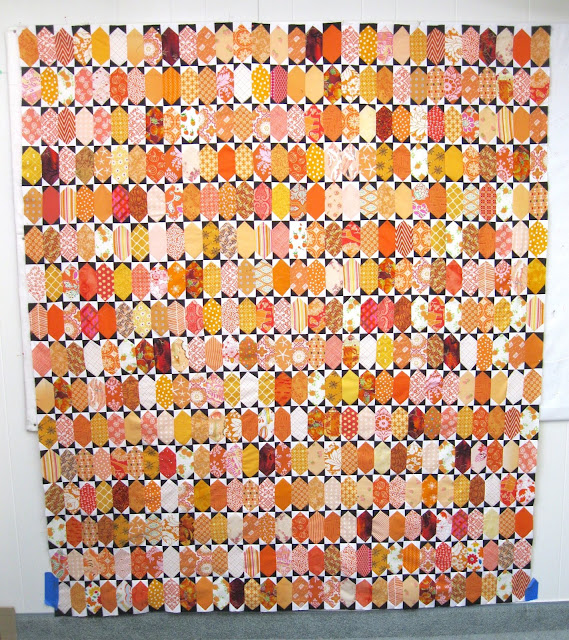 And finally, I got started on the quilting of Linked Squares. It’s halfway done. There’s not much to see at this point. 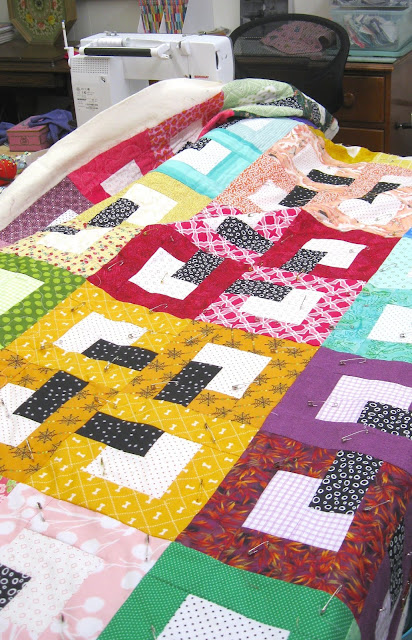 I’ll finish quilting it today and tomorrow (sew day with Cousin Kim!). It will be a finish for this week. My goals for the coming week are also to sew and quilt the baby quilt top whose pieces I showed last week, sew up all 7 bird blocks in blue for my Lattice Birds top, and baste the Orange Lozenges quilt. I have a mammogram on Wednesday and lots of housework to face during the week sometime. But at least there will be a slow return to normal - or what passes for it - around here. Thanks for dropping by! xo.