I’ve had Neil Diamond’s song “Forever in Blue Jeans” running through my mind today. (You’re welcome for the ear worm). Referring to the punny title of this post, I don’t even know if there’s a Jean who reads this blog. And I don’t want to be in blue forever anyway. But for this month, those of us participating in the Rainbow Scrap Challenge are concentrating on our darker blue scraps, from mid-range all the way to navy. And black or other dark neutrals if we have time. Angela is hosting Scrappy Saturday again and we’re glad that she has missed the worst of Hurricane Florence. But the inundation of the Carolinas is underway. If you live there, I hope you’re safe and dry. 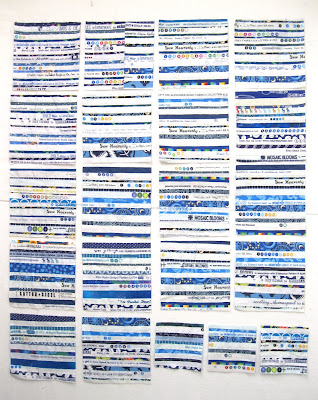 And as often happens. the Block Lotto block for the month of September happens to be the same color as the Rainbow Scrap Color - blue in this case.  Here are my two blue blocks. Aren’t they cute? 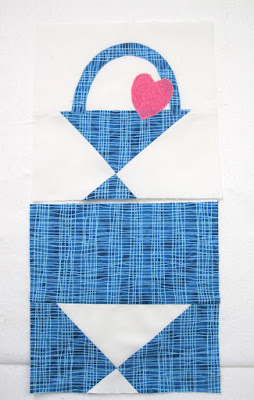 These are for donation to the group because I was one of the winners of the California Poppies blocks last month. Forty blocks toward a bright quilt! Stay tuned.

Moving along, I made the remaining four blocks I needed to complete the next round in the All You Need is Love quilt I’m making for my daughter Megan. Three “lollipops” and one friendship star. 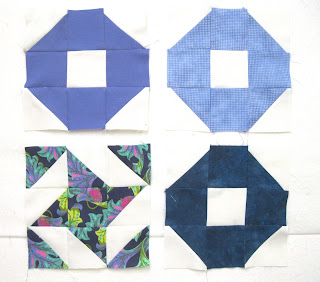 The lollipops on the left side are sewn to the main piece; the rest of them and the stars are just stuck up on the design board.  I will finish sewing that round and then put it away until later in the month or perhaps October.  But for fun, I pieced a few of the black and white checkerboard squares that will comprise the next round. What do you think..... will that be OK? Or should I do it in navy and white?? 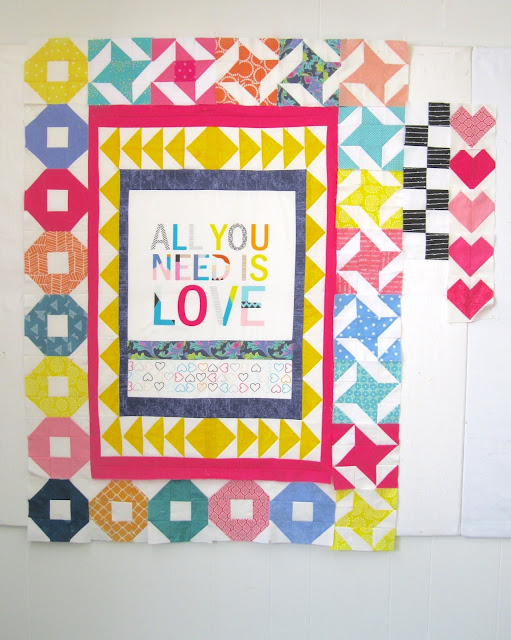 The hearts, all 54 of them, were pieced when we had the pink RSC month, so by the end of October I should have the next two rounds added on. The final row after that is an 8” block, yet to be decided. I’ll get more serious about it during the 4th quarter, since it’s a Christmas present. 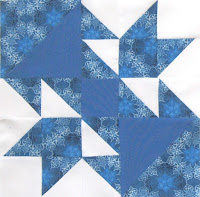 I was playing with the collage maker that’s installed on my iMac, getting used to its functions since all the other free sites have either changed to paying sites or are so gooped up with ads and crap that they’re virtually unusable.

Anyway, remember that awful block I pieced last week - my wacky take on this month’s lovely Squared Away block? Let me refresh your memory.... see the mess block at right? Well, when I put it into a collage maker, with just three blocks across and four down, with a bit of turning, it looked like this:
That might really look nice with more blocks - a full-fledged quilt. I’m going to at least tuck away the idea. 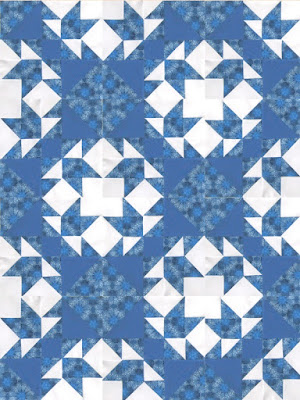 So what did I work on all week if there are no more blue blocks?  Well, I finished two quilts! YAY!!!

This is a safari-themed baby quilt that measures 46.5 x 55”. It went together so quickly! The fabric (all except the yellow) is an older line, Origami Oasis, by my favorite designer, Tamara Kate. I love the green block stuck in there with the blue. I truly was one block short of the blue (didn’t want to cut into the leftover stripe for the back) and had just the one green block. 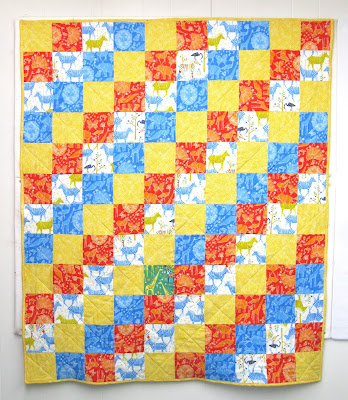 I franken-pieced the batting, and quilted it with straight diagonal lines. Here’s the back. 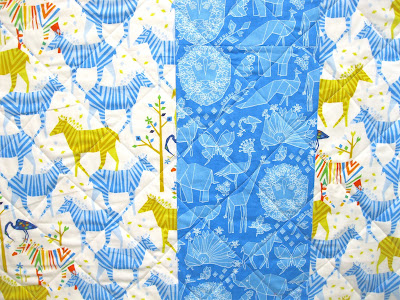 It’s meant to be a gift for someone, but I’m not sure we’ll be getting together. So, it may end up in the donation pile.

My second finish was Linked Squares. All I had left to do on this one was finish the second half of the quilting, which I did last Sunday, and then bind it. 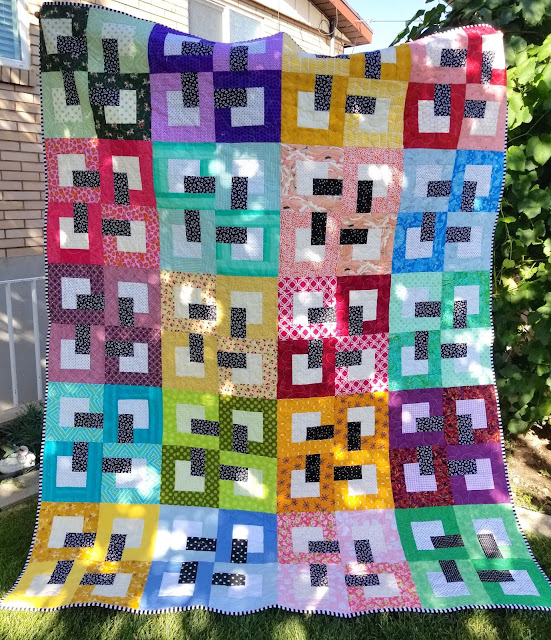 Linked Squares finished at 64x80”. The binding is a great black and white stripe, and the backing fabric is a piece of abacus fabric I picked up somewhere on the cheap to use for an RSC quilt back. This was my Finish Along Quarter 3 goal #2 (see list HERE). 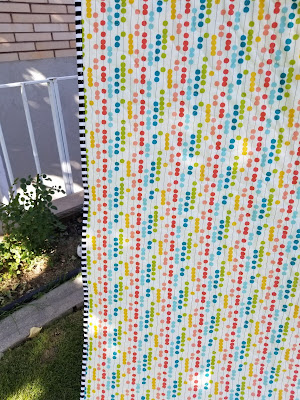 I’m planning on this being a donation quilt, but will wait and see if anyone else in the family asks for a quilt this year.

And since we’re working with blue, I’ll add these pictures of my brother Steve’s hot rod, Hellion (named for our mom, Helen, who loved being called Hellion). Steve got all his stuff packed, loaded and delivered home right on schedule.

Here’s one side of the 1930 Model A, looking from our front porch out to the street where it’s loaded onto a trailer. 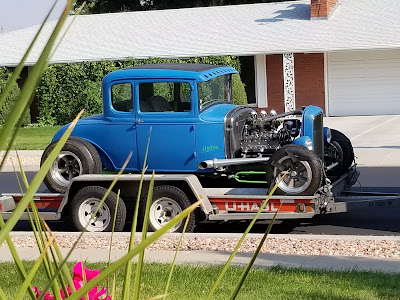 And the other side of the car, looking from the street back to the house. Hellion had a rumble seat, but it’s been removed to accommodate something or other. Personally, I prefer accurate restorations, but Steve is all about hot rods and dragsters. 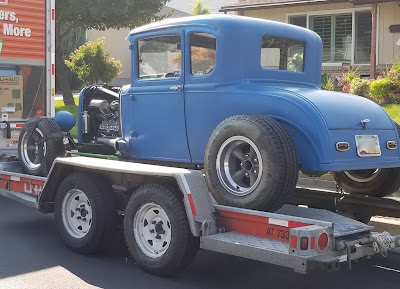 Now that Steve and his stuff are gone, I’ve got two guest rooms that will be getting refreshed over the next few months. The bedrooms, which are both along the front of the house, will get new double- or triple-paned windows. That will complete the replacement of all the windows upstairs, and all that’s left for next year is my studio window and a new screen door my studio outside door.

Also, we'll be ripping up the carpet in the yellow “girly" bedroom so that the hardwood floor there will match the “African” bedroom/library and the hallway. Then I’ll have the ceiling, closet doors, and wood trim painted white (from the existing gray). I’ll complete that refresh by painting the wood-grain ceiling fan white and making a new quilt and jelly roll rug.  In the African bedroom, there are two walls to retouch or repaint since the futon we gave to Steve really scratched up the walls. I’m getting tired just planning it all..... the older we get, the more happy I am to pay someone else to do the work!!