The last week was a most enjoyable one, with beautiful warm spring weather here in the Salt Lake Valley. I was able to get some sewing in last Sunday when Cousin Kim came over for our regular sewing day. And other than an additional hour of sewing on Monday, that was it for my time in the studio. Instead, Bruce and I spent a lot of time finishing up most of our spring garden chores. We also visited Red Butte Gardens, an arboretum here in Salt Lake City of which we are members. I’ll do a separate post on that. And I did a lot of prep for my upcoming trip to Africa.

But let’s take a look at what emerged from under the sewing needle first. Fifty-four 4” (finished size) hearts. 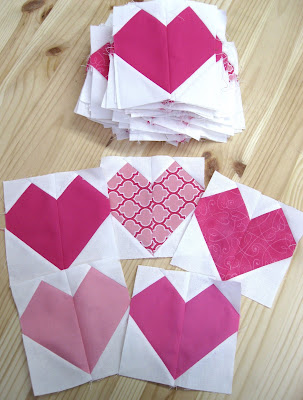 These will go into the All You Need is Love quilt for my daughter. What better time to get them sewn up than in the Month of Pink for the Rainbow Scrap Challenge.... 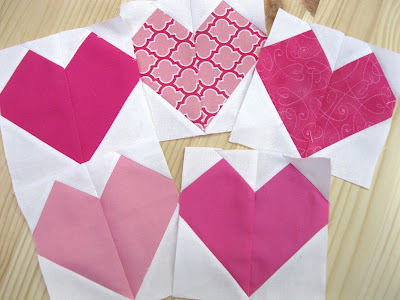 Mostly I don’t trim these up until I’m ready to sew them in to the top. They’ll be sitting around for at least a couple more months before that happens, so might as well trim only once.

Since we have almost a full week of pink left before month-end, I am going to wait to do my Pink Roundup until next week. In the interim, my plan is to finish the remaining three pink birds for my Birds in the Lattice quilt. And I would love to finish sewing the quilt top of the AB Baby quilt (my One Monthly Goal, OMG). But I’m not holding my breath on that one.

In preparation for my July trip to Kenya, I did lots of clothes shopping. Mostly I needed new summer things anyway, because of the 35+ pounds I’ve lost since last summer. But in addition to some shorts and tops, I bought a bucket (safari) hat. We had our second online meeting/orientation of the travel group. The non-profit status of our group has been approved! Also, I had to submit passport information to begin processing of the Kenyan visa. Now I have to go look for a large suitcase because it will be filled with my donated flannel and some wooden toys (handmade by local gentlemen) for Kenyan kids. On the way home, it can hold souvenirs. My personal stuff will all be in my carry-on.  I also found a beautiful leather journal and purchased it to have a place to write my thoughts and memories. Bruce is charged with finding me a new phone with a good camera. My old iPhone has been behaving badly for months. I’ll probably get a refurbished Samsung Galaxy S8.

I took some pictures of the garden and yard this week. I like taking them at different times of the season, and these will qualify as the early season photographs. Come stroll with me. You should be able to click on the pictures to enlarge them.

This shot shows that most of our backyard is taken up by 8 large raised planting beds. There are two smaller ones behind the middle row (visible in another picture). From the right row back you can see the rhubarb plant. Sharing the bed with rhubarb is spinach. Behind them in the next box is lettuce, radishes and peas. And in the far back bed behind them are pumpkins.

In the middle row we have tomatoes and carrots in the front bed. In the middle bed are onions, a tomatillo and several varieties of pepper.

Below is a closer look at the onion bed. The tomatillo has a cage, and the peppers fill out that row. There are red, yellow and green bell, a banana pepper and an Anaheim. No jalapeños this year. 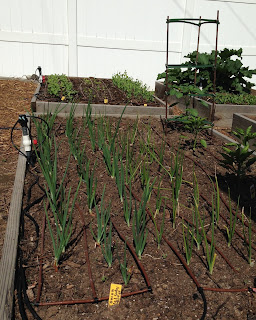 The farthest back large planter of the middle row is all potatoes. Behind that, in the picture below, you can see two smaller planters. In previous years they were tiers for strawberry plants, but that idea was a bust. So this year we separated them and planted them with more pumpkins and some garlic. 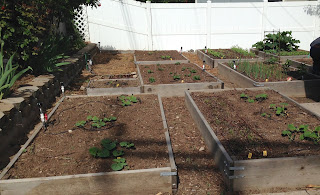 This is a view of the tomato and carrot bed looking back toward the house and postage stamp grass. You can see that the grape vines are beginning to climb the lattice along the patio. YAY! These pictures were taken about 10 am, when the sun was still in the east. Anyway, I don’t expect the grape vines to bear fruit this year - the growth reminds me of first or second-year growth coming off those mature, woody plants. But I could be wrong. Regardless, they will provide shade in the afternoons. 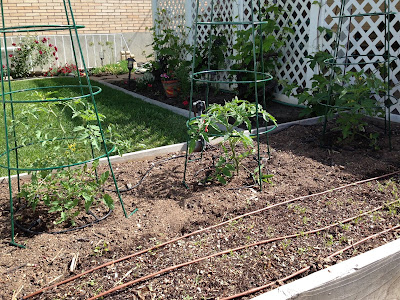 And let’s take a look at Mr. Rhubarb. Keep in mind that he was barely visible above ground six weeks ago! I have been harvesting off of this plant every 4-5 days now for a couple weeks or more. 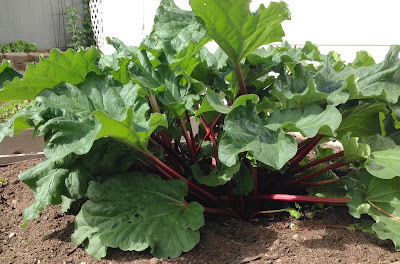 This bad boy has been keeping Cousin Kim and I busy making pies (Kim) and compote/sauce (me) and jam (me) for two weeks. The 7 jars in the right of the picture below are strawberry-rhubarb jam. My compotes are already in the freezer in their containers. And there will be plenty more of those in the coming week. And maybe I’ll even make a strawberry-rhubarb pie for Memorial Day weekend. 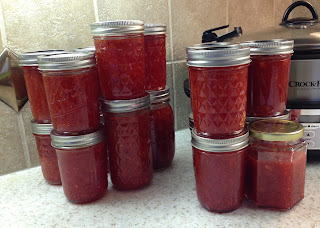 The jams in the left of the picture (10 jars) are plain strawberry. I’ll probably make another batch or two of those, depending on how many my kids want.

Shall we continue the early season garden tour?

This is the first rose (Daybreak, I believe) on the rosebush that lives where the front walkway meets the driveway.  In another week it should be going gangbusters, and I’ll get a picture of the entire bush ablaze with blooms. 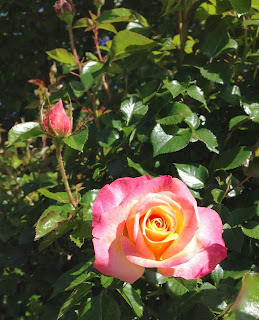 And here is the front walkway with the planted Talavera pots. There are two plain brown pots of petunias snuck in there for the moment. The shepherds hook we usually hang them on was moved to make room for the newly-planted rose tree (left of picture). We were going to relocate the shepherd’s hook to the right, but it needs rebar support to hold the weight of two pots. We have the necessary post, but the pots would hang over a newly-planted rose bush in that area, and I’m not willing to let them do that. So I’ve got to come up with a Plan B. 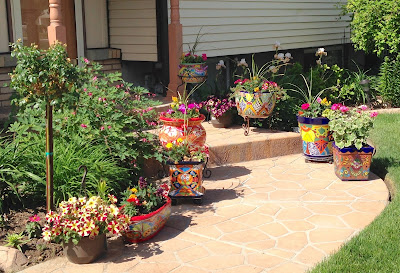 May is the month of irises here in our yard, and we are overrun with them. Last year, with Bruce’s cancer scare and minimal gardening on our part, they did not get divided - and they were overdue then. This July and August, it’s my top priority.  This  champagne iris below is a favorite of mine. We bought some unusual hybrids several years ago at an iris show, and this one has been prolific. 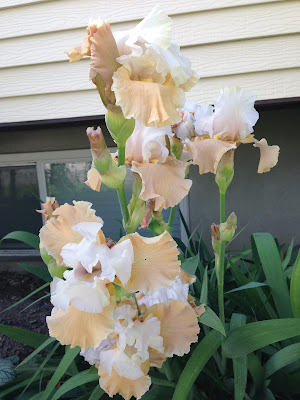 These irises, another overgrown patch, are along the west side of the house. They, too, need to be thinned.  But aren’t the colors gorgeous??? 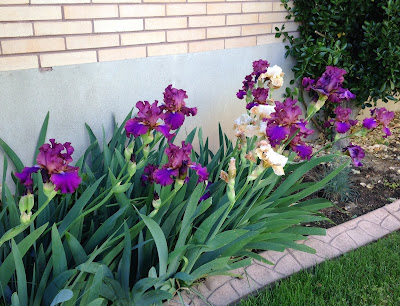 And more along the west side. That’s the fence to the backyard, and these irises live under the canopy of the apricot tree on the other side of the fence.

Backing up from the above shot, you can see that whole west/south corner of the side yard. That window is actually my sewing studio. Anyway, if I remove that urn, I’ll have room to spread the irises. I’m all about low maintenance as I get older.  And I’m thinking of building a fairy garden in the urn and moving it to the back yard under the apricot tree. More thinking to do on that, too. 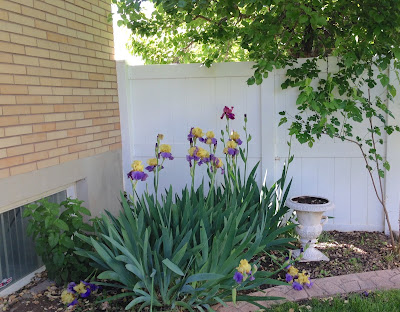 By next week, we’ll have and explosion of roses and more irises blooming. Things have already changed in the two days since these pictures were taken.  I’m already enjoying the fragrance of cut flowers in the house.