I have no idea why, but this month I'm enjoying the hell out of this month’s Rainbow Scrap color of pink. Yeah, enough to say hell instead of heck! Just picture this fluffy person in her new swivel chair at her sewing machine sewing and rocking away to the beat while my poor cat Darla rolls her eyes and tries to sleep nearby.  And she does roll her eyes!  Anyway, you can see all sorts of pink scrappy sewing and fun over at Angela’s Scrappy Saturday blog post. No eye rolling required!

First up this week was the Geese Migration blocks from the pattern by Cynthia Brunz. I did three of them, one more than I have done every other month so far, bringing my total to 17 of 25 needed. Next year I will add one more of each color when I presumably have more scraps and variety. 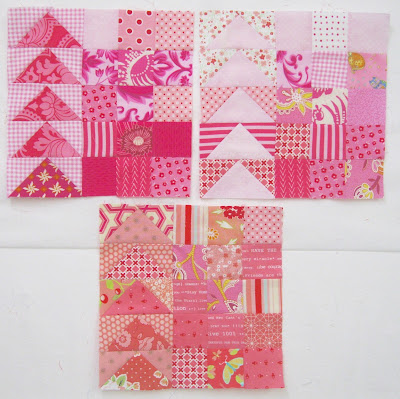 Then I worked on plus blocks. Not pictured are four orange plus blocks that I added to last month’s total (so there are now 8 orange pluses instead of just 4). And here are the 21 pink ones that I did. This gives me a total of 114 blocks, which is about 10 more than I need. So I can weed out the ones I don’t like as well and put them on the back or in a kennel quilt. I hope to start assembling the plus quilt before the end of the year. 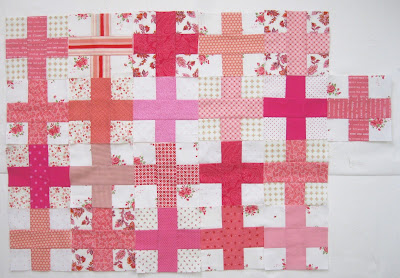 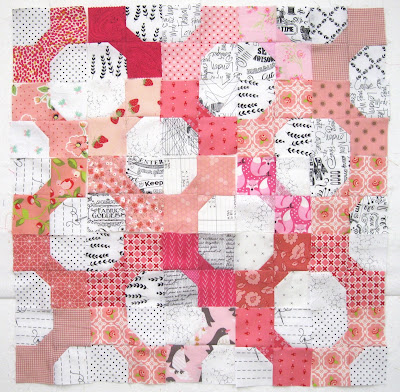 Oh, and I have to point out two super cute blocks in this group. The first is the middle block in the bottom row of the bow ties above. Notice the pink penguin fabric? That is from my friend Diann, who also made a bow tie block with it. (In my last post, I showed the cute zippy pouch, pin cushion and fabric she sent me).

The second block was a rather serendipitous occurrence as I was chain piecing all these blocks. 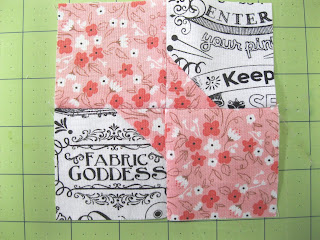 Fabric Goddess! HA! How cute is that?

So then I had almost a whole jelly roll left of a pink (and some orange) fabric line called Palm Court.  I began sewing strips together adding a few other bits here and there, not quite sure what I wanted to do..... 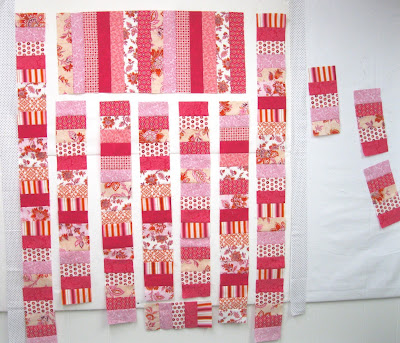 It turns out I’m not that adventurous, because I didn’t stray very far from my original idea. But I do loooooove the white with black polka dot sashing!!  The picture below looks rather wonky because half is pinned and the bottom part just hangs. 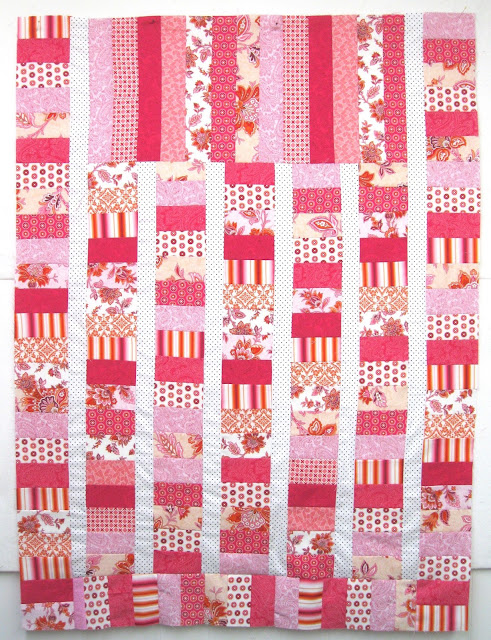 Bruce came up with the suggestion of expanding my design board to the floor, which might happen some day. But then the cats would just go after the pins anyway (or worse - start climbing it! Sorry, Molly!) So just use your imagination to envision a straight quilt. Besides, I can assure you that the top and bottom widths are less than 1/4” difference (which is as good as it gets in my book).

In the coming week, I will baste both this pink quilt (a future donation quilt) and the Reading Rainbow quilt. And then start quilting Reading Rainbow. I also hope to finish all my pink Friendship Star blocks. There is more pink on the horizon beyond that (vintage sheets, bitty scraps and kennel quilts), but I need to think about those and possible new Rainbow Scrap blocks for awhile.