Have You Any Wool?

I finished another block in our Crazy Quilting International Wool "Do Your Block" Round Robin.  This one was Hideko's block.  She asked for stitching only - mostly seams, but some small stitched motifs were OK.  So..... this is what I came up with. 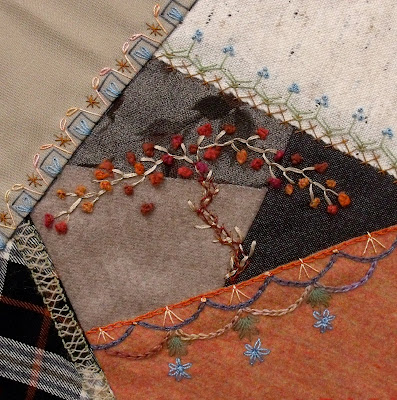 It's basically just embroidery.  And it was relatively quick and oh so fun!  This round robin has been a really nice change of pace - a sort of "back to basics".

Bruce and I went to Home Depot today and spent a pretty penny on the yards.  We got flowers for my front porch pots, weed & feed, mulch, bark, a compost bin, a new gas barbecue, and rocks for an area I need to get some control over, LOL. 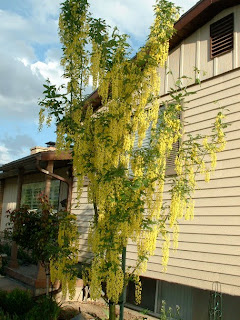 We also bought a red maple to plant in the front yard where we
had our old pine tree cut out last year (see this post).    Originally we had planned to put in a flower/vegetable garden there in the front because our neighbor had an ugly Siberian Elm (a junk tree) that grew nearly overnight to shade our vegetable garden in the backyard.   We asked them if they would consider trimming it, and they were so kind and removed it altogether (they didn't like it either).  So, we had our garden back last year.

Today we decided to plant a maple and have the front area sodded where the old tree had been.  We contacted a local landscape contractor for a bid today.  These contractors, who gave us a reasonable bid early this afternoon, were out here in force an hour later working their fannies off.   Wow, people must really be in need of work!  I don't know whether to be sad about the situation, or happy that we can help them as they help us!  Anyway, the maple tree and sod are in.  They're digging up our parking strip sod.  We'll cap the sprinklers there and do some xeriscaping along the parking strip, since it never seems to look nice anyway.  And they're removing my d*@% holly bush that I've wanted out for years, but could never dig up myself.  And they're removing a dead tree stump of my beautiful golden chain tree (see picture above) that died last year.  We think it got poisoned when the contractors who removed the pine tree were poisoning the roots of the removed tree.

I've planted 3 colorful flowerpots for my front steps and have several to go.  I'll share pictures soon; the snowball bush and my irises are getting ready to bloom, so I should be able to take some good pictures next week.

I'm way behind on my commitments to CQI (posting about the June Challenge, which is Dimensional Embroidery).  So that is what I'm off to take care of now.    I'll continue with the purse-making posts early next week!