Yesterday (Saturday the 22nd) was a cool and cloudy day in the Salt Lake Valley, with scattered rainshowers as had been predicted all week.  So, there were not a lot of yard sales and estate sales.  However, there were some, and I made it my morning priority to get to two of them.  Neither were great for for me, but there were some little things here and there that I picked up.

In the first sale, I found a sewing box with some trim in it and some old silver.  As I accumulate this silver, I still can't decide if I want to use the bowls and plates I get for display or to sell.  Either way, I will polish them up a LITTLE.  The tarnish adds character (at least to me) and I'll have to leave some for that wonderfully shabby look. 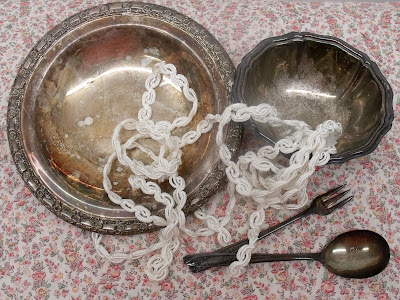 The second estate sale was held in the wonderful old (and pricey) Harvard-Yale area of Salt Lake City.  The home itself was like a French cottage and had just sold.  It was just a treat to go in and see parts of the home.  Much of it was blocked off, and all the furniture and goods were in the main floor rooms.  In fact, the living room and its massive fireplace were set up like a bedroom, with sunlight streaming in the French doors onto the bed.  Wish I'd taken a picture!
Anyway, I fell in love with this chest of drawers - a former jewelry box? - when I saw it. 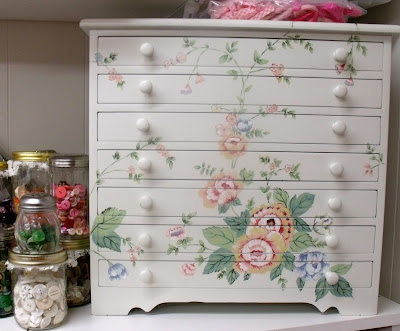 It's about 18" tall and wide and about 6" deep.  Probably not more than 20-30 years old, but OH!  I brought it home and moved my bias tapes into the drawers, by  colors.  It all fit except my pinks, which you can see in a ziploc bag on top of the chest in the first picture.   But that's OK, once I get sewing again on aprons this spring, I'll use up a lot of it. 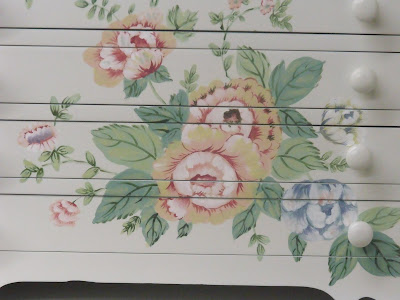 The floral motifs that cover it are hand painted.   And they wrap around to the sides and top. 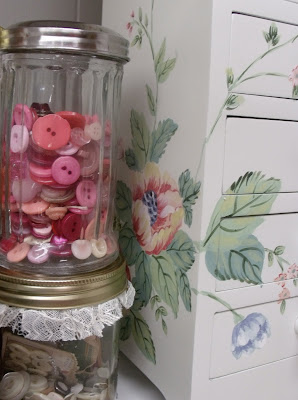 I paid $35 for it, and another few dollars for a vintage iron (you know, the heavy old irons that you heated on the stove?!?  Didn't get a picture of that). But here's how nicely the bias tape fits: 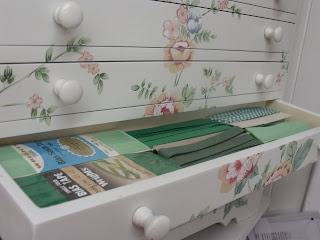 So it was not a bad day for The Hunt. 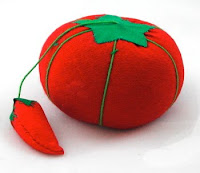 And now for some miscellaneous things.  Earlier this week I was cleaning out my sewing desk and ran across one of those big ol' store-bought tomato pin cushions.  You know the ones with the attached emery strawberry for sharpening needles.  Well, I often stick my sewing needles into the pincushion itself, with or without thread, and they've been known to get lost inside the sawdust of the pincushion.
I was about to throw away the pincushion (very, very hole-y) when I felt the prick of a needle.  So, I thought "what the heck".  I've always wanted to tear one of those babies apart  disassemble one in a very ladylike manner.  (ADMIT IT - you have too, right?!?)
Well, guess how many needles I found inside?  Thirty-nine! 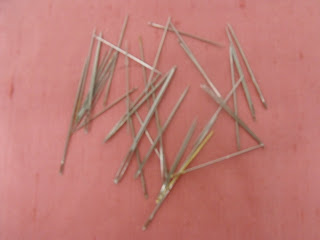 Sorry for the bad picture (but honestly, how exciting is a pile of needles, anyway?).   I was just totally blown away when I kept finding a needle, then another, then two more......  And yes, they're mostly sharp, useable and will be put back into use!
My dear hubby Bruce and I have a running joke about his vitamins.  I take regular women's vitamins.  He takes the Costco brand of "mature vitamins".  One morning he was being his usual humorous (and slightly silly) self - a trait that has added a lot of fun to our marriage.  Anyway, we were taking our vitamins when I saw his "Mature Vitamins" container and told him they obviously weren't working!   We got a good chuckle over that, and now, every time he buys a new container of vitamins, the label is "corrected" to read: 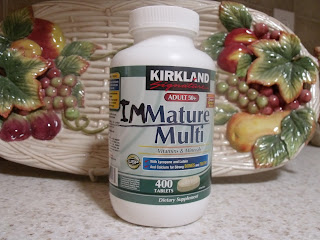 And last but not least (which you'll probably agree with after reading the previous....), here are a few snapshots of my garden.  THEY ARE SAD.  It's been such a cold, wet spring and I've had neck and shoulder issues for which I'm doing physical therapy.  But slowly, very slowly, I'm getting to one bed after another to get it cleaned up, trimmed, weeded. mulched, planted.  Warning:  not all things pictured have had their "spring cleaning" yet!
Case in point:  Our Snowball bush really well, snowballed this year!  It's beautiful, but needs it's feet cleared of overzealous lavender (and weeds, I admit it).  And it needs a good trimming and shaping.  It's on my list for this season. 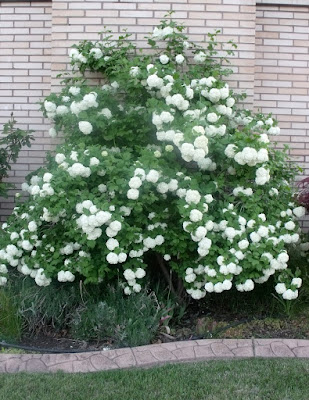 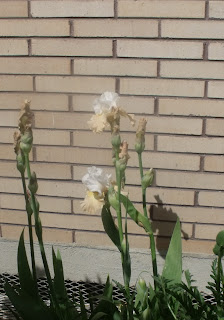 On the left, the planter bed under the north-facing front window (with spent daffodils) is just about to bloom with several varieties of iris.  More pictures in a week or two.  Meantime, on the east side of the house, our champagne irises are just beginning their show. 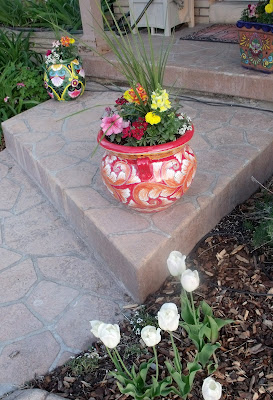 I have some of the front porch planters planted; there are another 3-4 left to do.   Some of the tulips are still blooming, and I have mulched a couple of the front beds.  And the porch posts are slated for filling and sanding and painting this year. 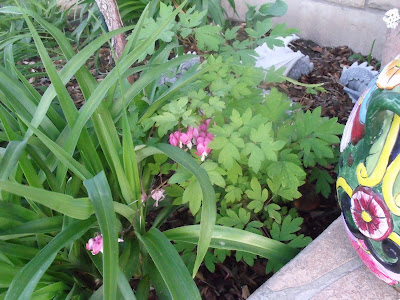 Here you can barely see my favorite garden serpent hiding behind the bleeding heart.   To the left (front) of it is a small daylily variety and the bark is my Double Delight rose tree.    In that same bed are other daylilies, a hosta, some russian sage and a few annuals.   The calla lily died and was pulled. 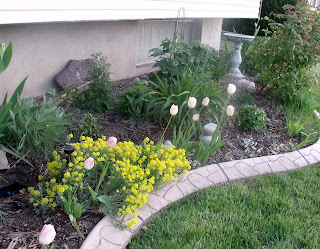 We have a hole in the front perennial bed where the golden chain tree was.  I think we may plant another.  Down at the end of the bed (where the house ends, past the birdbath and rose) is where we had the #@&*! holly bush.  It's gone, praise the Lord, and in its place I'm thinking of either a burning bush OR an arbor to further extend the front facade of the house.   Wisteria?  Climbing Roses?  Still thinking on that one.  Meantime, I need to do more weeding and mulching here, and that's on the agenda for this week.
A friend and neighbor of ours came by this week and tilled our garden for us.  We own a tiller, and let him borrow it to till his garden, too.  Win-win, since Bruce's outdoor activities are limited from his winter back surgery.  He did manage to replace all the outdoor security light fixtures, however.   So, I'll plant the garden this week.  We're also getting bids on having our front parking strip dug out & soil-treated, the sprinklers capped, landscape barrier put down and decorative gravel delivered and installed.
Well, I think I've rambled long enough.  Hope I haven't put you to sleep!!