Creating Motifs for "I Love Paris"

Over the last couple weeks, I've been sharing some of my thoughts and steps in creating my "I Love Paris" purse.   In the past I showed how I pieced, gathered ideas to develop the theme, organized my supplies and how the French girl was created.
Although I had originally intended to have a front and a back, I ended up calling them the Poodle Side and the Eiffel Side.  For although the original front was supposed to be the girl and poodle side, the Eiffel side was by far my favorite!
The Poodle Side
I like to start off with a few seams, either stitched or trimmed in ribbon, lace, etc.  To me it's a bit of a warm-up.  The seams can always be covered up with things later, so it's not a major first step.  I try to avoid seams that I know may be involved in another treatment or motif (if I've got something concrete in mind).

Also, I didn't want to cover up the fleur de lis in the fabric with seamwork.  In piecing the purse, I tried to place the fleurs de lis where they would show, but not necessarily the center of the patch. 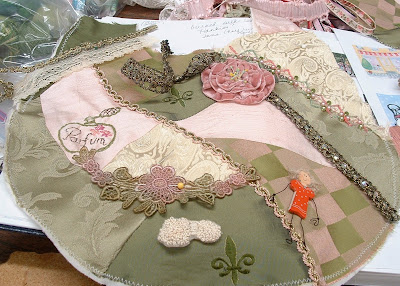 The first stitched motif was the perfume bottle.  You can't really tell from the pictures, but the atomizer is trapunto'ed (is that a word?).  At this point I was experimenting with the painted lace and the velvet flower (which I'd done for another project but appropriated for the purse).    You can also see that globby looking ecru mess (near the bottom) - that was the first poodle body.  I did it in French knots (what else?) but the color looked dirty to me, so I scrapped it. 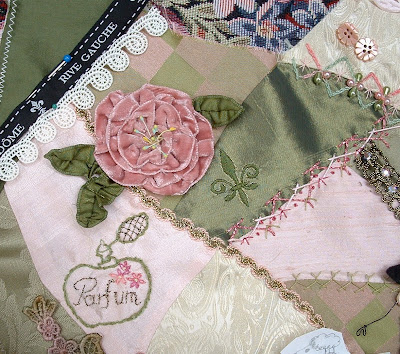 More placement experimentation, with some vintage lace (white loops) and vintage trim (pink and gold) added.  The black & white ribbon with French sayings on it (Rive Gauche is "Left Bank") came from Alpha Stamps.   They've got lots of fun things!! 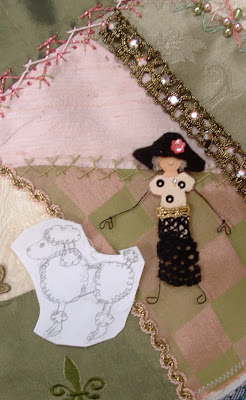 With the poodle redrawn at the approximate size I wanted, I could play with the girl/poodle placement on the purse.  Since they were both basically oriented in a left direction, I wanted them on the right side, facing IN.  And since they would take up at least two patches, their placement needed to be determined early.  The poodle body and head was beaded on felt, then attached.  Later I embroidered the feet, face, etc.  The girl was not added until the purse was sewn, lined and turned right side out.  I didn't want to deal with the wire arms and legs catching on everything, so she was the very last addition. 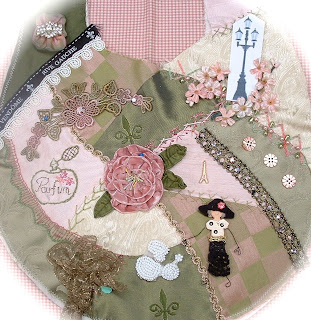 This picture shows some metallic lace I had hoped to (but never did) use in the lower left.  The vintage millinery flowers and picture of a lamppost in the upper right were scrapped, too.  I really wanted that streetlamp, but that area was better suited to the bistro table and chair I eventually embroidered.  And I didn't want a vertical image like the lamppost on the other side of the purse to compete with the Eiffel tower.  The other item that was scrapped was that pink/green ribbon and rhinestone bling in the upper left because I wanted more handwork and fewer "things" added.  Of course, any Paris purse has to have SOME bling, LOL! 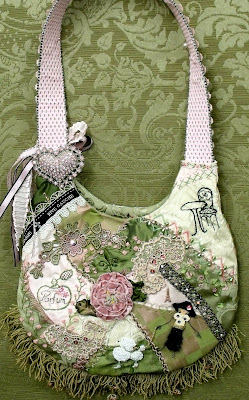 So this is how it ended up.  The lace pieces were actually parts left over from the lace that surrounds the Eiffel tower.  They serve as repeating elements to each other and to the lace on the reverse.  The one in the middle right is also a good "stopper" for the vintage trim gleaned years ago from a dress I bought in a thrift store.   And I was able to add more  "bling" by attaching a heart buckle-and ribbon "charm" to the handle.

The handle was a thrift shop belt.  On the plain white side, I glued (Fabri-Tac) some wide French-style ribbon (see Eiffel side pictures). 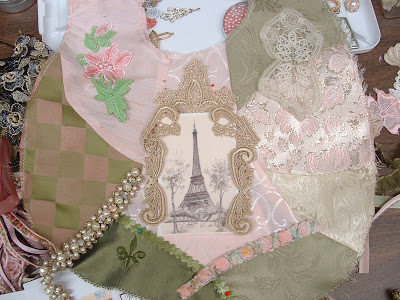 First up on this side was placement of the Eiffel image on the center spot I'd pieced for it.  This delicious lace just screamed to me to let it become a lush frame for the Tower!  Here you can also see that I was auditioning various trims like the pearl (too heavy), vintage silk ribbon rose trim (later used but in a different spot), the corset-shaped vintage lace (ok, ok, it's just a lace bow turned on end, but it looked like a corset to me!) and the dyed floral motif.  The dyed motif was chucked early - not in keeping with the theme. 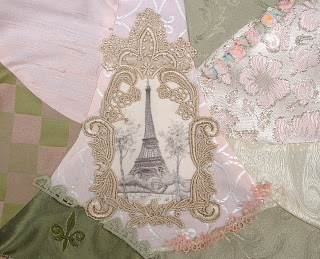 Image sewn down and more lace added to bottom.  The green lace and pink tatting were added below. 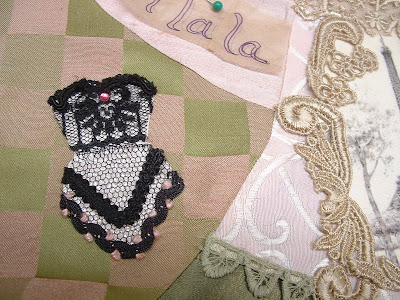 The lace "corset" was voted off the island, and instead I fashioned this naughty lingerie from lace and trim and a stick-on rhinestone.  THAT necessitated an "ooh la la" being embroidered nearby. 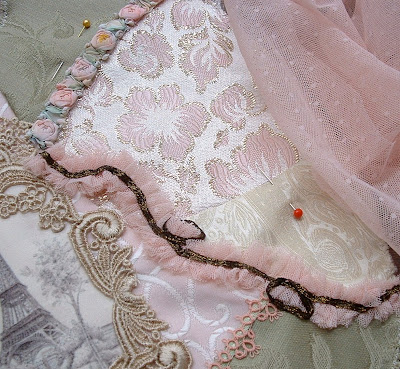 This seam treatment turned out to be one of my favorite happy accidents.  You can see the polka dot tulle fabric in the upper right.  I cut a strip of it, gathered it down the center and sewed down.  I meanders lazily down the right side of the Eiffel area and curves right.  Over the stitching I tacked some black and gold soutache trim to echo (reinforce) the black in the lingerie motif. 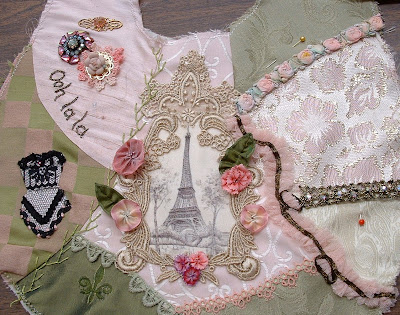 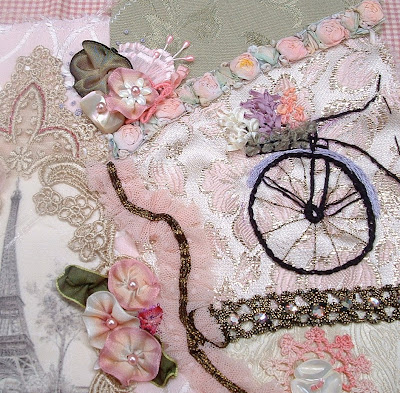 Again, the black vintage trim was used (repitition from reverse side) and that, with the black-but-light-in-scale stitched bicycle further echoed the black in the lingerie.  The flowers in the bike basket bothered me (the white ones "disappear"), so I eventually colored them with a paint brush and some Adirondak ink.  And you can see more flowers and leaves added to the lace trim, along with some light stitching for accent. 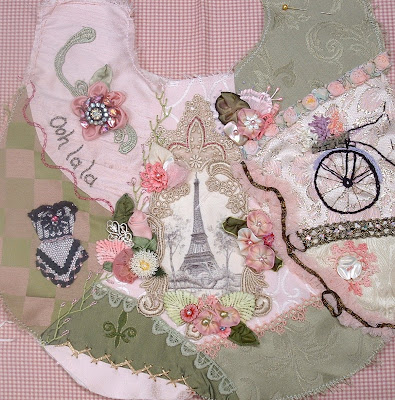 More decisions made:  left bling finalized (I HAD to use that broken earring!!), more seamwork started, still more central flowers.... 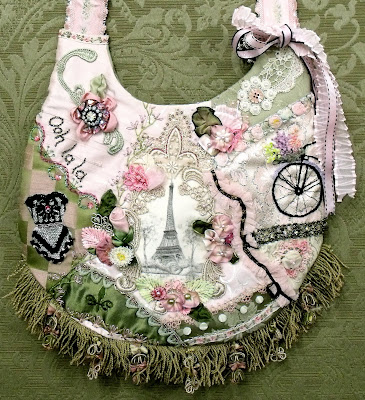 And the final version of the Eiffel side.  Those tiny pearl buttons in the lower right were some of a boxful that was left over from my grandfather's sweater factory.  He owned a business in NYC's garment district and he designed children's sweaters and the workers machine-knit them.

So that wraps up "I Love Paris".  Now, I'd love to really, truly visit Paris one day!!  And thank you, dear readers, for following along!!