Last week I had finished all my light blue blocks for the Rainbow Scrap Challenge’s (RSC) September color. And while most of us had deduced that the final color for October would be light and bright greens, I decided to work on a few other things around my sewing studio this week. My green scraps are all sorted by size and shape and I’m ready to hit the ground running today. But let’s backtrack a bit to recap this last week.
My string bucket was overflowing.  I should’ve taken a picture, but we all know what a mountain of fabric strings and strips look like. They’re mostly multi-colored strings because each individual color is usually kept with its mates. So I began sewing string blocks on Sunday.  Cousin Kim was sewing with me, and we first pin basted two large quilts; her Halloween quilt (more on that momentarily), and a quilt top donated for Quilts for Kids.
As I sewed strings, I realized that I could probably get literally hundreds of blocks from the bucket. So, I decided to set myself a challenge. I’m going to try to sew 300 (6.5”) string blocks by the end of October. Week One was this past week, and I sewed 60.
So in the four weeks of October, I hope to sew 60 blocks each week to reach that number. I’m pretty sure I have enough strips to complete that many, but we’ll see!
Judy B (GrammajudyB blog) wrote to Diann B (Little Penguin Quilts) and me and invited us to join her in sewing crumb candy blocks for RSC’23. Diann has started hers, and I had commented on her blog that I wanted to do them too. Perfect RSC/Quilts for Kids block! Here is my 8” (finished size) test block. 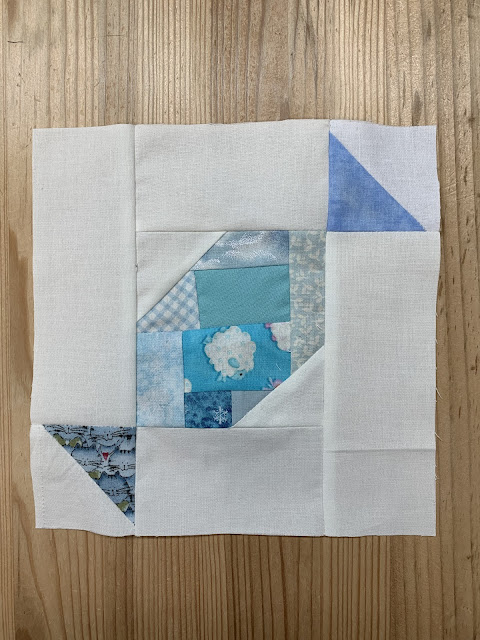 This would sure be a fun block to do in Christmas colors for a Christmas row quilt!
Another thing I did was to start the quilting on Cousin Kim’s Halloween quilt. It’s a central panel surrounded by twelve 12”, sashed blocks. I’ve quilted three individual blocks in loops and started on the center panel custom quilting. I decided a spider web would be a perfect large motif for the upper right corner. 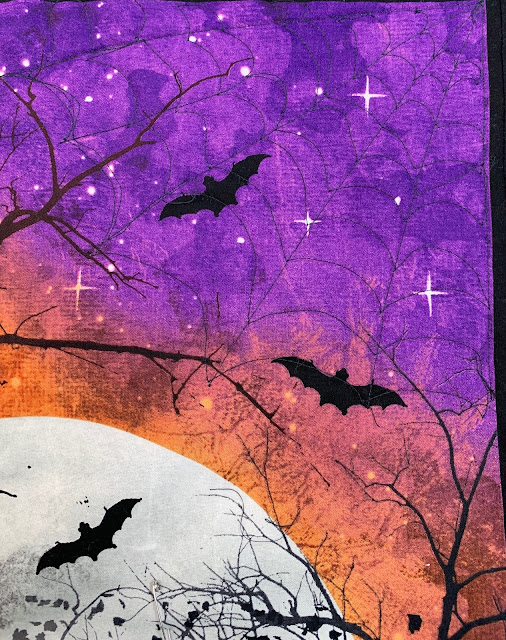 It’s a bit hard to see it, but that’s OK because the quilting should be subordinate (my opinion) to the fabric anyway.  The rest of the quilting in the panel will mostly be outlines and echoes of the haunted house, black cats and pumpkins. I have a matching panel to make a Halloween quilt out of - we all bought them when we visited Missouri Star Quilt Co. last year. Unfortunately, my plans got interrupted by sciatica in September, so I’ll postpone my quilt until next year. That will give me time to settle on the blocks I’d like to make to surround the panel and squeeze those in here and there as my schedule permits.
My final project for the week, sewing-wise, was to quilt this lovely donation quilt from McGill in S.C. It was a simple matter of stitching in the ditch. 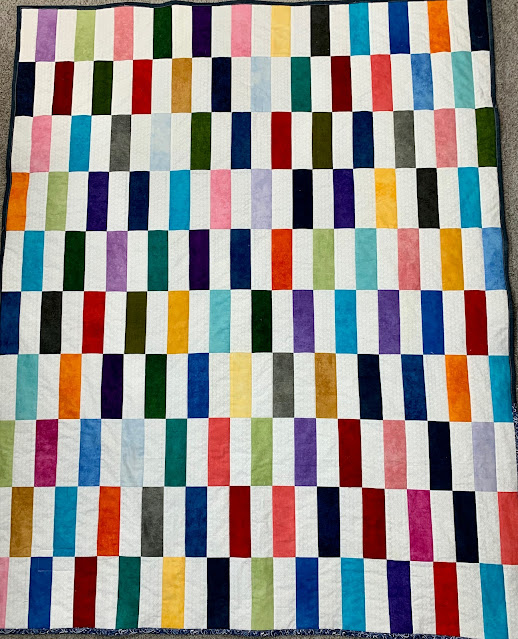 It was such a joy to quilt this beautiful, colorful quilt! Thank you for your generosity, McGill!  The backing she provided was a dark blue print supplementing the mostly navy grunge back. 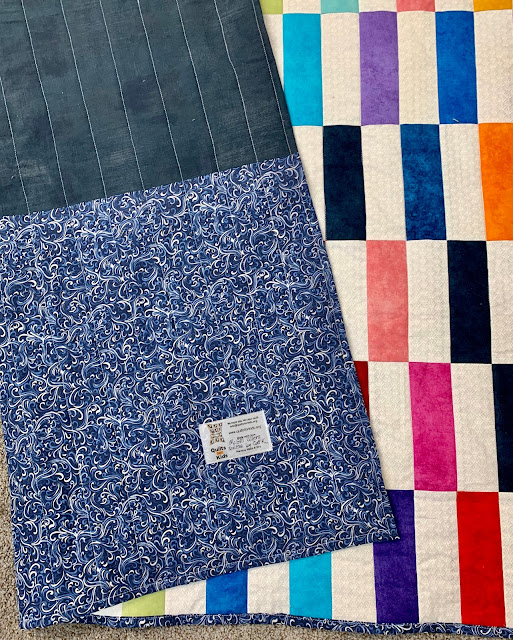 The second quilt that McGill donated is one of the two that Kim and I basted on Sunday, so that will be done in the coming week, along with (hopefully) the blue and red checkerboard quilt top!
Finally, Darla would like to thank you all for your comments and wishes for a speedy recovery from her traumatic dentist appointment. She has taken to borrowing my cell phone and taking selfies. 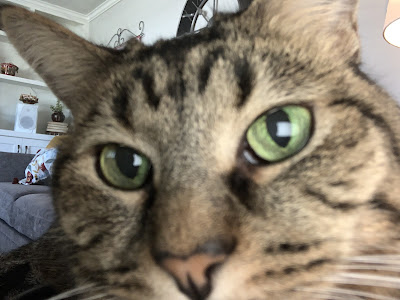 Yesterday we harvested a lot of vegetables from the garden and will be taking them to daughter Stacy and family today (including a pumpkin). Before we leave, we’ll pick a grocery bag-full of green grapes and purchase a couple of Papa Murphy’s take-and-bake pizzas. On Monday we will be digging up the entire bed of potatoes and the rest of the onions and carrots. The tomatoes and cucumbers are fine for now, but we’re beginning fall clean-up while keeping an eye on the weather forecast.
I think that’s it from here. For my Florida and South Carolina friends and family,  I’m glad you’re all safe. We’re all thinking about you and hoping that the recovery efforts are as swift and smooth as possible considering all the devastation. Our hearts go out to you.
Linking to Scrappy Saturday for the Rainbow Scrap Challenge at Angela’s blog.
Posted by Cathy at 9:17 AM