Oh, it’s been so good to sit down several times this week and just SEW!  Truly, it’s my happy place. If I need to de-stress or just REST from the garden, housework, errands, etc, , I head to my studio. Nothing has happened on that front for the last week. Apparently the person who schedules the carpet installers is on vacation this week, so my calls and even a personal visit to the store have yielded nothing. Apparently the Home Depot carpet world world just stops when Lara is not in. I’m fuming, for all the good it will do. But my stamina is not a thing to be trifled with, so I will be back on the phone and/or in the store come Monday. I want the carpet trimmed and re-stretched so I can get my studio back!!
So while I can’t baste and quilt quilts, I can still sew blocks. Since August is orange for the Rainbow Scrap Challenge, I whipped out and organized my overflowing orange scrap bucket and got to work. I’m linking up to the weekly Scrappy Saturday post where we all share our progress.  First up was the mama cat and her five kittens. 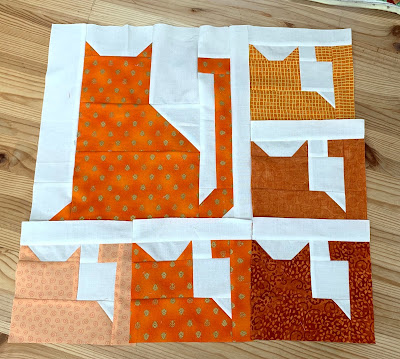 This is the ninth and final litter for this quilt. Yay! I can begin sewing blocks/litters together and then sash them. I have the design all set, so at least I’ll have a flimsy soon. It’ll be added to the pile of flimsies that need to be basted and quilted whenever, well, you know….
Next, I sewed four spring star (also called ribbon star) blocks. I love these blocks so much! 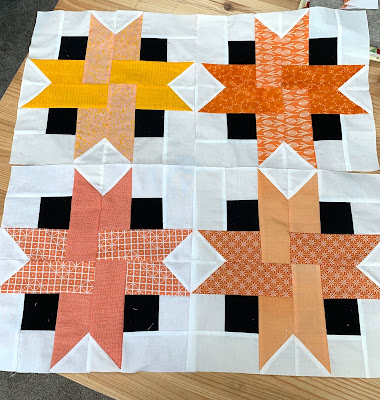 That block on the bottom left looks a bit off kilter, but I think it’s just the skewed directionality of the print. The measurements are actually fine. Oh, and that block’s star points are just covered up by the block on top of it. Regardless, it’s not getting ripped out and re-sewn. All I have left is one more light green block to do, which will happen in October, then the stars will be ready to be sewn into a flimsy.
Yesterday I sewed up eight orange Split Nine Patch blocks. These are the final blocks for this RSC quilt. These blocks were sewn from 2020-2021, and now total 120. 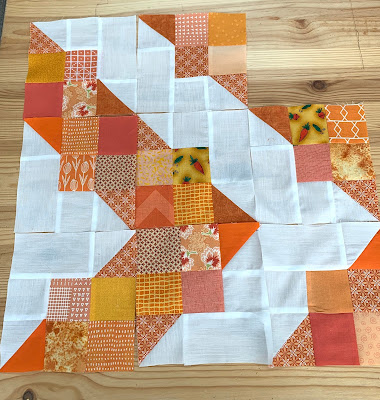 These blocks are so versatile and there are many ways to arrange them to yield different patterns. But until I have my design board back, I won’t even attempt to come up with a pattern yet. Hopefully, I can attack this one in October!
On our last trip to IKEA, I bought this cute folk-artsy pillow as well as the gold pillow case behind it. Then last Wednesday, Cousin Kim and I went to JoAnn’s and I got a pillow form for the gold pillow casing and some white flannel for the design board.  Anyway, here is Alfie “modeling” the new cushions. He very much approves of the colors! 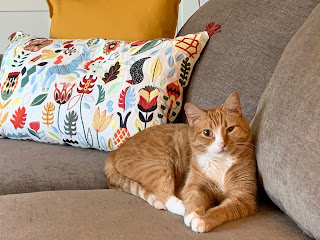 Both Darla and Alfie had their annual wellness visit (and booster shots) at the vet this week. They did NOT enjoy being tricked into their travel carrier and they complained all the way there. But they were good as gold during the exams and the ride home, and they didn’t even seem to hold a grudge that evening. Maybe after eight years they’re finally beginning to understand that the horrible annual trip where their temperatures are taken in the most undignified manner never really hurts them.
Bruce’s brother Marv arrived for a visit last night. I thought he was staying for a week, but I guess it’s for three weeks. It’s been almost ten years since he’s visited us here, although we see him every time we visit Arizona in February. I may have to break down and do some cooking! (Wink)
Posted by Cathy at 8:47 AM