Bruce’s brother Marv (one of his three brothers) has been visiting us from Arizona for a couple weeks. As I write this on Saturday morning, he is on his way back home. But we had to have a family gathering before he left so everyone could see him since it’s been 8 years or more. Last night was the party night at our house. It was a lot of work, but boy was it a lot of fun!

There ended up being 16 of us, with 3 in the under-12 age range. We had pizza (three kinds), tossed  green salad, a fruit salad, cookies and a great lemon zucchini bread. The kids had a blast picking their allotment of pumpkins (limit 3 each), onions (limit one each), and grapes (limit one small brown paper bag each). I had already picked tomatoes to pawn off on any willing takers. We sat out on the patio until past dark (the patio has lights and a fan). What a wonderful, wacky and fun group the family is! Even cleanup was a snap with several of us (women and men) pitching in.

In my sewing studio, the carpet people arrived right on schedule Monday morning to trim and re-stretch and lay the carpet. As soon as they were done, I shampooed the carpet, and when it dried it looked as good as new! We began moving in the tables and shelving units on Tuesday and Wednesday. On Wednesday I went to Home Depot and got panels of insulation foam (like styrofoam). I used a staple gun to cover the panels with white flannel. 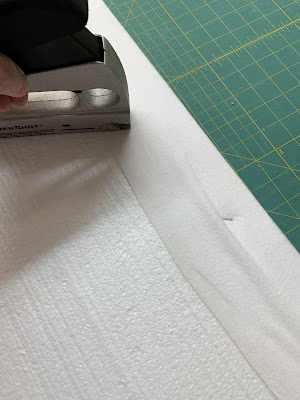 The insulation panels I used came in a six-pack of 3/4” boards measuring 14x48” for $10.60.  Odd dimensions, but that is probably some standard building measurement for the space between studs. I had to run to JoAnn’s to get more flannel, but I had it all done by Thursday except where I ran short. 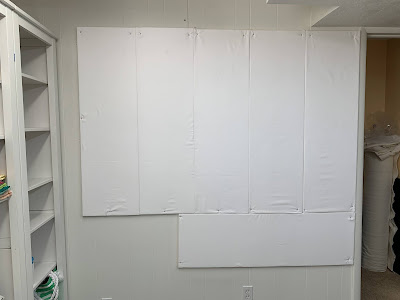 I’ll have to go get one more insulation board to finish up. Later this morning our contractor and family member Jeff is coming to hang the blinds for us. Tasks like that are a bit problematic for a numbskull (me) and a one-armed man (Bruce). My final bookcase - a Hemnes bookcase from IKEA - will be delivered on Wednesday. The horizontal storage unit I wanted from IKEA isn’t available *anywhere* at present, but there is a similar one in stock at our local Target. I’m picking that up later this afternoon. The 3” bed risers for it will also be arriving on Wednesday. Then all I have to do is find a board to pad and cover for use as an ironing surface on top. With a little luck, I can get it all done this week and finish moving in my fabric. As soon as it’s all complete, I’ll give you a tour!

But I do have all my sewing tables set up again, and Cousin Kim and I had fun sewing in the “new” studio last Wednesday for a bit. Here are the blocks I was able to churn out this week for the Rainbow Scrap Challenge’s orange September: 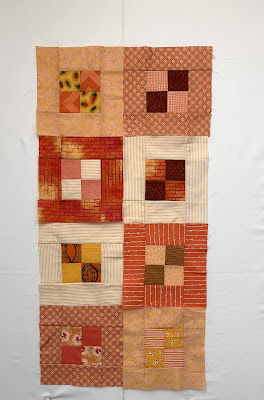 I started off with eight framed four-patches, above. I’d been sewing some regular 4P’s here and there earlier in the year, but this week decided to try them out with dark and light frames around them. Much better, and a great scrap buster! These framed 4P’s will be one of my RSC blocks moving forward into 2022.  And then I tackled my crumbs and got 12 6.5” (unfinished size) blocks. 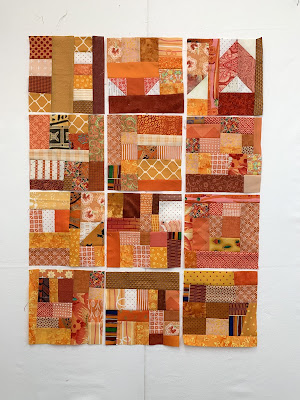 On Monday, I’m planning a marathon basting session to get at least four quilts basted. My goal is to get that many finished up by the end of September. I feel as though I’m finally emerging from a long “tunnel” of remodeling, garden chores, and family guests/obligations. Not that I would change any of it; it’s just that I’m so ready for a rest and some serious sewing time! Life is good. Have a wonderful week, friends.