Well, this week saw some warmer weather across the US, a rocket that blew up after landing, some short-sighted governors opening up their states and ending mask mandates prematurely (have they never heard of Spring Break?), and crocuses popping up all over. The first and last of that list is what we’ve enjoyed the most as we have begun taking longer and more regular walks around the neighborhood. And some evenings we even forget to turn on the gas fireplace. Those are sure signs of spring in my book!

For eyes that are starved for green, many of us are thrilled that Angela chose green for March in the Rainbow Scrap Challenge. I’ll be working in all my green scraps to make green versions of blocks that will eventually become rainbow (all-color) quilts. So, first I started with blocks left over from last year.

For these half-nine blocks, I only needed two colors of blocks to finish up - green and orange. So, this month I made the eight green blocks. They aren’t sewn into the two big squares, just plopped up on the flannel of the design wall. I haven’t decided on the final setting of these versatile blocks. 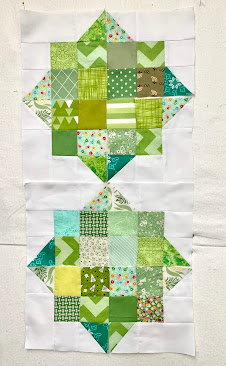 When we get to orange, I’ll sew those and then the blocks will be ready to sew into a quilt. Next I sewed a mama cat 12” block. You may not be able to tell from this picture (wink), but this Momcat is pregnant! Yep, her five kittens will be delivered sewn by next week, so stay tuned! 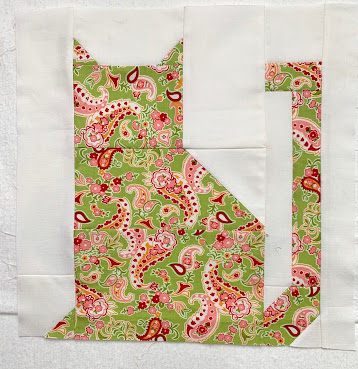 The other green blocks for this week were three green Spring Stars. 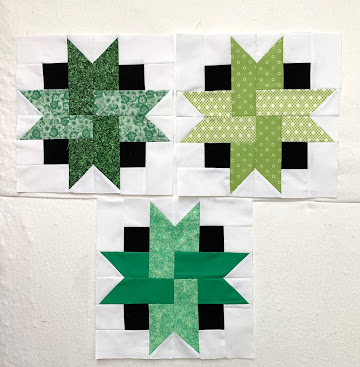 Two of them are for my collection of Spring Stars that will go into a 20-block RSC star quilt. The third one (bottom one in picture above) is the 11th of 12 blocks needed to finish this former BOM quilt. I felt it needed a true green. Anyway, I started these blocks in 2019 at a local quilt shop, but the class got cancelled due to Covid and I’m just finishing them up on my own. I’ve got one block left to do, but am undecided between orange or blue for the final block. Here are the 11 blocks up on the design wall (this isn’t the final layout). 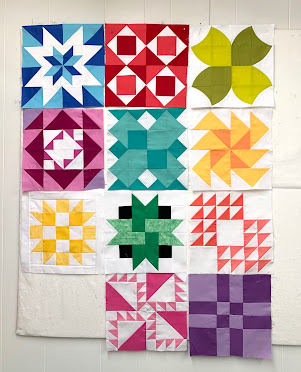 So, what color should I use for the final block? 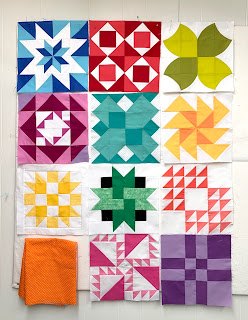 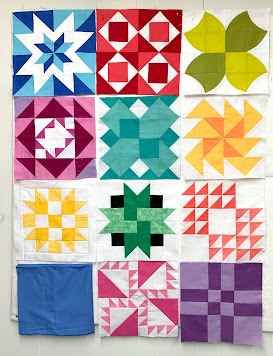 I’m even open to another color. But right now I’m leaning toward orange.

This week was also the final week for the Stay at Home Round Robin (SAHRR). The hostess Gail called for Pinwheels for the final round. I’m linking up to this week’s Linky party.

There was no way I was going to do pinwheels all the way around this quilt. It would’ve been too busy. What it needed was a border. So first I added a 1” red stop border all the way around, and it then measured 44.5x58.5”. 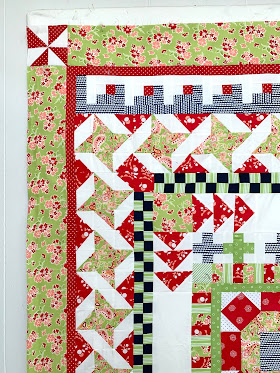 Then came the final 4.5” green border and four pinwheel cornerstones. I know it looks wonky, but that’s just the way it’s partially pinned/partially hanging from the design board. The design board doesn’t go down far enough, so I can’t pin the bottom portion into the wall. 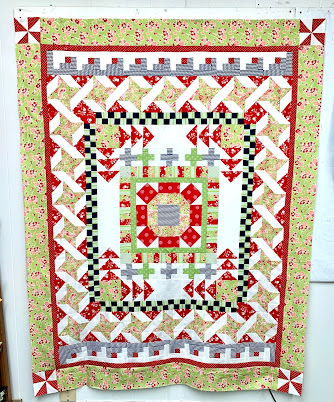 It measures 53x67’. Now we have until March 29 to finish up. There will be a Linky party then for everyone who participated to show their final quilts/wall hangings. I have finished piecing the backing from some leftover red checked fabric and some green and navy scraps from the top. Stay tuned.

And since I’ve become the creative repository of scraps from our Salt Lake chapter of Quilts for Kids, I’ve been using the RSC color of the month to pick out scraps and projects that match that color and sew up a few quilts. This month after going through everything, I’ve come up with five hopeful kid quilts to make; (1) green/blue frog scraps, (2) green/gold/brown Flower Fairy panels from Angie, (3 & 4) some seahorse border print fabric to make into 2 quilts, and (5) hopefully a miscellaneous scrappy Green Thang.

The frogs grabbed me first. The focal fabric was a piece measuring about 13” x 22” - not enough for a quilt on its own, but with a little help from scrap “friends", this is what I came up with. 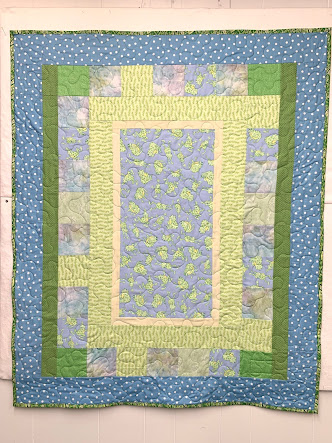 The central frog panel was surrounded by a 1” yellow border to echo the yellow in the frogs’ chests (seen better in the closeup, below). After that came a 3.5” green foliage (“swampy”?) print, then mixed 4.5” squares of remaining frog print, a blue and green batik, more swamp foliage and darker green cornerstones. Next were two side strips to widen the top a bit. These were sewn from 2.5x4.5” scraps, and there were just enough to do those two strips! Finally I added a 4.5” outer border of light blue polka dots. It really is light blue - not as dark as the picture makes it appear.

It was quilted with a basic stipple. The back and binding is this fun leafy green print from my stash. The final quilt measures 39.5 x 47.5" 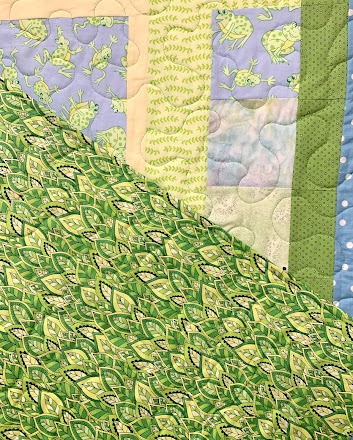 Next week - seahorses! Green kittens! And more green scrappy goodness. Stay safe, wear your mask and get your vaccine. xo
Posted by Cathy at 10:11 PM