Our Late May Garden

I like to do an early garden post almost every year. So I figured I’d better get to it. We’re way behind our usual schedule this year, so a lot of the weeding/grooming and mulching haven’t been done yet. But hey, it’s reality and not an audition for a garden magazine, LOL.

The vegetable garden is planted. That was the first priority once Bruce was able to work outside and the weather cooperated enough to allow it. Here you can see the onion bed (foreground) and the potato bed behind it. 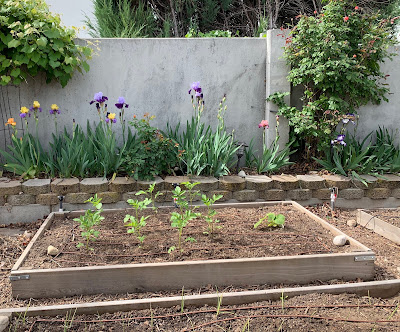 Along the wall, the irises were beginning to open up, but the roses not so much. 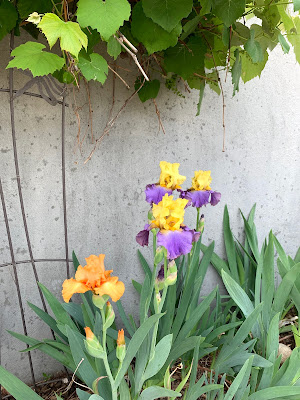 Here are some closeups of the irises along the back wall. 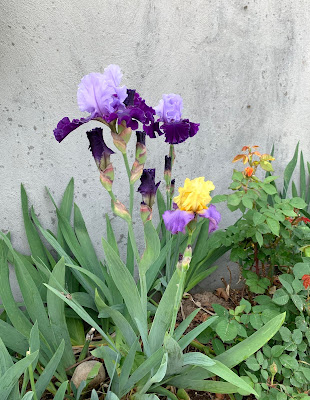 This one is my favorite. I wish it were as prolific at reproducing as some of the other ones! 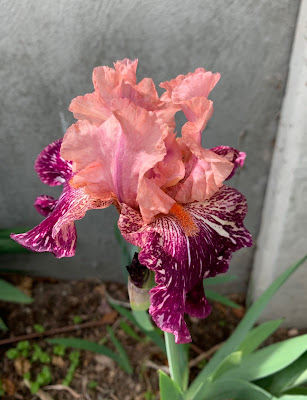 Also in the very back, the pollinator habitat that we built last year is beginning to “wake up”. Our trumpet vine was planted in the corner so that it could climb the metal trellises to its left and the telephone pole behind it in the neighbor’s yard. It looks like the neighbor’s ivy (full botanical name: Damn Ivy) has beat it to the pole. I have hope, though. I read in our Neighborhood App a couple days ago that our neighbor is looking for a couple kids to help him work to clear out his ivy. I sure hope he means this ivy! I try to kill any ivy that encroaches on our yard from that side or from behind the gray wall. 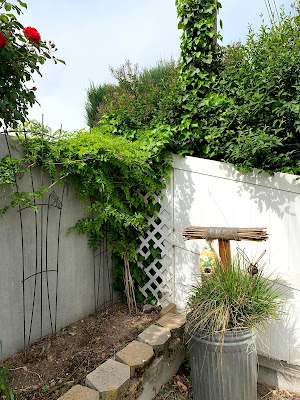 The stump of the apricot tree is rather forlorn. Our lawn guys are going to cut off about another foot off the stump and level it so that I can display a flower pot or bird bath there or something. He’s waiting for his chain saw to be repaired. With the apricot tree gone, that corner is much sunnier, and the hollyhocks are loving it (and so are the two irises I tucked in there last year, apparently!) 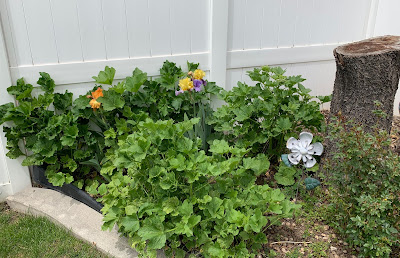 Here’s another hollyhock planted in that same corner. And Boomer’s headstone. 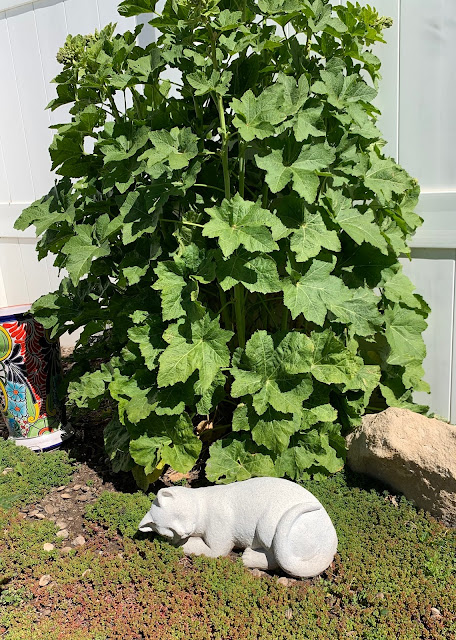 And my Chihuly rose is really blooming nicely and finally growing a bit this year. 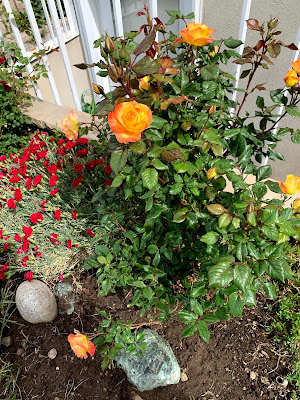 I think the fiery yellow and orange roses of Chihuly bush perfectly evoke a sense of his unique glasswork, don’t you? 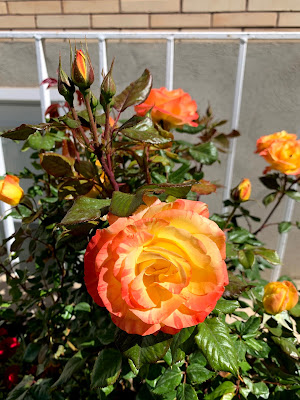 We have little grapes forming on the grape arbor, but the picture I took was backlit terribly, so I’ll try again with those another time.  But these snapdragons came back with a vengeance this year, which is surprising. They’ve never acted like a perennial for me before! There is a glass pelican hanging nearby, plus the woody bases of the grape vines. You might also notice some un-pulled grass *cough* in the bottom left corner. What can I say? It’s a process.... that bed is only about two thirds done. 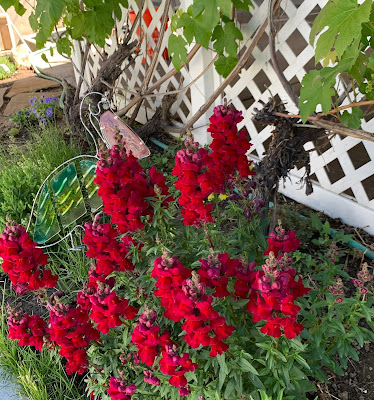 Moving to the east side yard, our poppy has opened. I used to have a monster bush here on the side yard, but I think I tried to do something dumb like divide it and ended up killing it or something. At any rate, I immediately replaced it about 3 years ago with this poppy, and it’s just now finally condescending to bloom for me. 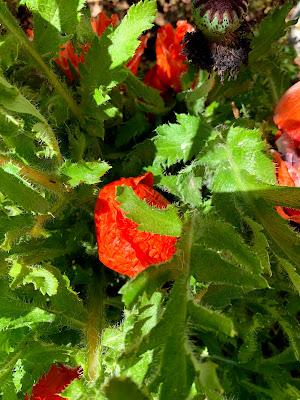 I think there were a total of about 5 or 6 flowers this year.  Sorry the picture’s not too great. 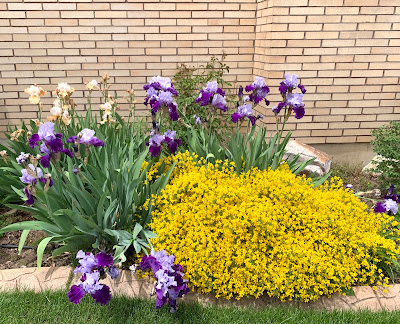 The bump-out on the brickwork of the house is the chimney. We used to have a snowball bush planted there, but it died and we had to have it pulled out last spring. We replaced it with a burning bush (small green clump on the very right); it will take time to grow. In the meantime, we have plenty of spring color there with the irises and the yellow stuff. Usually I know my flowers, but this one has slipped my feeble mind.

Moving on to the front, there’s not much to show because we are still working on getting the grass out of the flower beds so I can plant the rest of the annuals. But I can show you my lovely rose at the corner of the front walkway and the driveway. 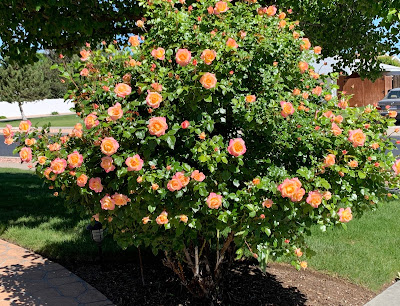 Every year we get two great shows from this bush. 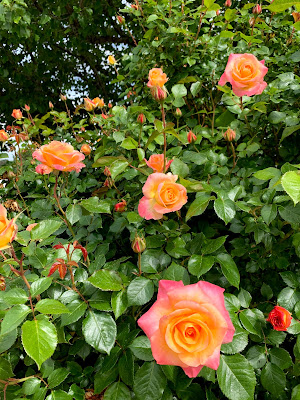 You’ve already seen our front walkway lined with the Mexican Talavera flower pots we like to collect. But here is a shepard’s hook on which I hang a pot of store-bought petunias to give a little height to this front bed. Behind it are irises, a lily and in the very lower left is - goldenrod?? There is a small lupine in there somewhere too. 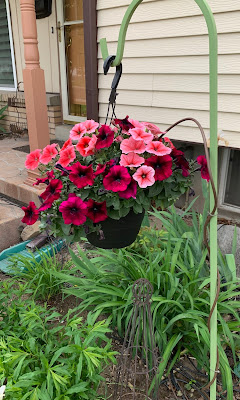 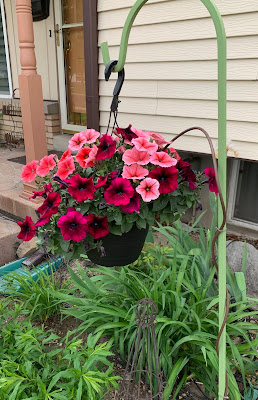 Our house faces north and this portion of the bed doesn’t get too much sunlight. So the hostas, irises and brunnera (with little blue flowers, below) love it. 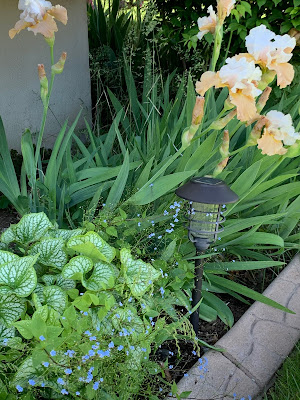 Below is another hosta and one of the delphiniums that has grown and spread. It already needs to be re-staked. I’ll show pictures again when these beds are weeded, mulched and the flowers really come into bloom. 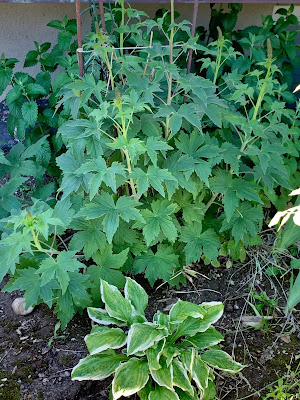 As for the west side yard, move along folks, there’s nothing to see there. Except more irises and grass up to our knees. We’ve already removed a couple wheelbarrows-ful of weeds and grass. If you listen, you can probably hear us crackin’ the whip as we get that yard into shape!

And last but not least, here is the revised fabric pull for the new project I hinted at in my Saturday blog post. I’m joining in with Erica Jackman of Kitchen Table Quilting for the Tessa Quilt Quarantine-along. 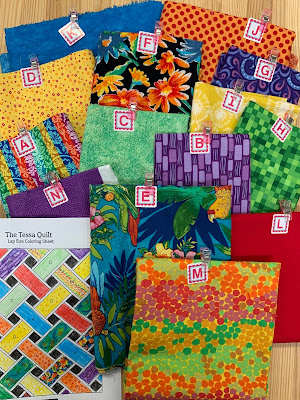 I’ll be making a lap-sized quilt. Today I made time to color in my coloring sheet and figure out fabric placement and yardages.  Woo-hoo! Now to begin the cutting!
Posted by Cathy at 8:19 PM