More snow here this week. And that was great because it gave me a chance to stay indoors most of the week and SEW. And I sewed like the wind!

Let’s talk green. Light and bright greens are the colors this month for the Rainbow Scrap Challenge, and I’m linking up to Angela’s blog for Scrappy Saturday. There is so much color and inspiration there from all the participants.

First up for me this week were the string blocks. I had a lot of green strings and ended up with 16 blocks measuring 6.5”.  I sewed these on my back-up machine over last weekend. 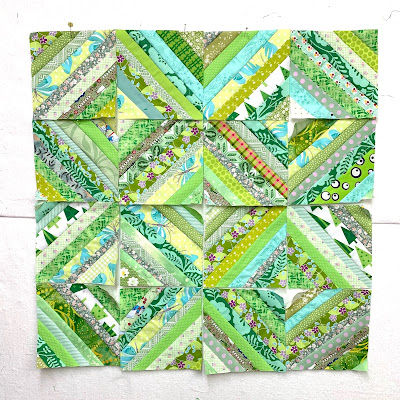 On Monday I got a call from the service department that my regular machine, my Bernina, was ready to come home from her annual checkup and tuneup. So we went to pick it up. The service notes told us how they cleaned the inside, adjusted the presser foot tension and reset the internal stitch counter. There were 2.5 MILLION stitches put on the machine in 2019. Holy moley! All Bruce could say was “No wonder there are so many threads all over the house!"

Here are six International Sisters blocks. I’m still sewing these from Preeti’s pattern. Two of them will be for me and the other four will go into wall hangings I’m making for Harambe Humanitarian, a Kenyan non-profit organization that I became involved with when I went to Africa in 2018. The jungle fabric was a gift from my friend Sally. 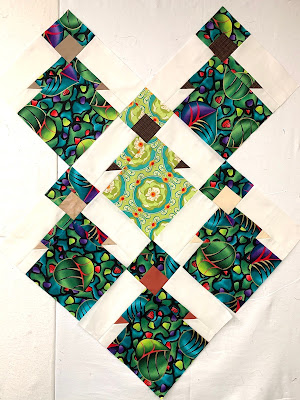 We interrupt this blog post for an Impurrtant Announcement from Darla. She would like to remind you that any house decoration done with stray sewing threads is vastly inferior to all the beautiful furs she (and brother Alfie) bestow upon us on a daily basis. This concludes our public service announcement. 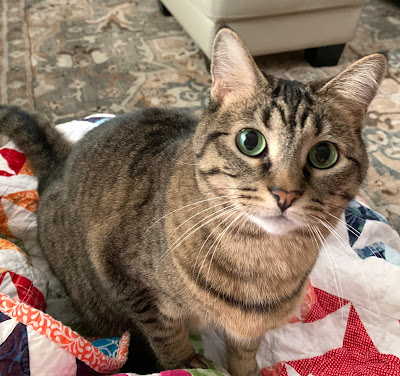 Ha! What Darla didn’t mention is how she and Alfie happened to notice that I had not totally sealed a ziplock bag with some balls of embroidery thread inside the other day. In a matter of mere minutes, there were two balls of perle cotton missing.  I noticed it when I went to rethread my needle to finish embroidering the cord on this Farm Girl hand mixer block. 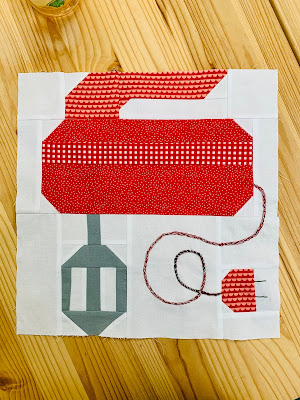 Getting back to green fabric sewing, it was time to tackle some tiny scraps and crumbs. I’ve been wanting to make some of Angela’s scrappy baskets (tutorial HERE) for awhile now, and this is the year that it’s happening. Her tutorial is very thorough and the process came together very easily.  I love it! Thanks, Angela! 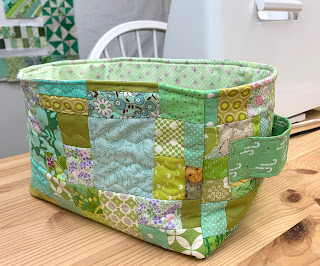 Now my green scraps have been liberated from their plastic drawer and henceforth will reside in style in their own little bin. Isn’t it cute? I just quilted it with a simple serpentine stitch. The remaining scraps (no, I didn’t use them all) have lots of room. 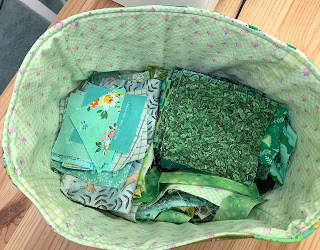 And the picture below shows the basket in situ. As I use up fabrics and downsize a bit, there will be room to put the scrap baskets on the shelves with the folded fabric by color. At least, that’s my theory. Im hoping that by the end of the year I can use the emptied set of plastic drawers to stow the sewing supplies that are currently in a big, heavy desk that I want to get rid of. 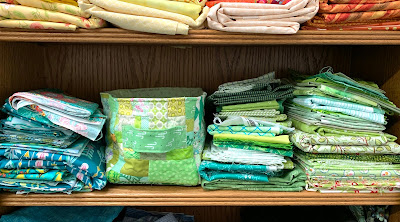 So, I’ll be making these scrap baskets every month for awhile!

Once those projects were done, I began playing with green orphan blocks and green scraps from the Parts Department. With the bazillion half-square triangles (HST’s) I had, I made several pinwheel blocks. I pulled in 8 green cracker blocks, the 8 selvage log cabin blocks from last week, 10 of the 16 string blocks and various other parts. The goal is to get some sort of cohesive quilt out of this mess. The color will help tie it together, but so far the only part that’s actually sewn are the 8 central cracker blocks with the little checkerboard trim between them and the white strips along the side. Everything else is just pinned. 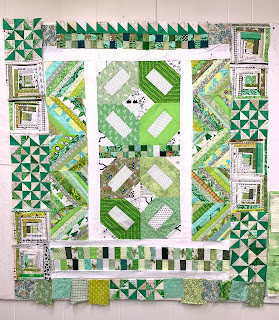 This block play will get some attention this week, but I know one thing for certain. Somewhere in there I have to add a pop of a different, unexpected color. I don’t know what that color will be - red? purple? orange? blue? We’ll see as this moves along.

I have a lot more to share, but I’m going to cut this post off here. I’ll be back in a couple days to show you more sewing stuff, not the least of which is a couple quilt finishes. Have a great weekend!