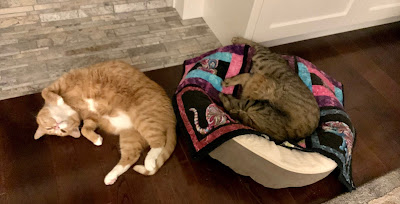 This was a good week for staying indoors to sew. We had several snowy episodes throughout the week, although down here in the valley it doesn’t accumulate much these days. Along the foothills and in the mountains, though, they’ve had a very white January. So, sewing it was! I did break for laundry, housekeeping, errands and our weekly date night out to eat. Oh, and to pay attention to the poor neglected cats. As anyone who is owned by cats knows, one must pay proper homage to the royalty.

I started the Rainbow Scrap green month of January working on my selvages. My plan was to make some wonky selvage log cabin blocks, and I showed one of those last week. I ended up sewing 8 of them at 6.5” each, but they took absolutely forever. And my selvages looked like they hadn’t been touched. Oy. 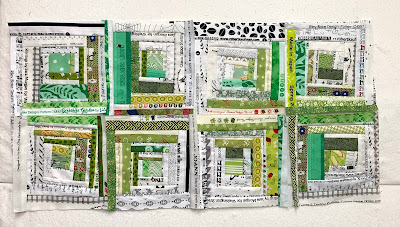 I would’ve had to make 2,354 log cabin blocks (that may be a *slight* exaggeration) to use up my selvages. So, I switched to Plan B.  Perhaps using one of my Accuquilt dies like last year, when I did tumblers, would be the ticket. So, I tried some circles. 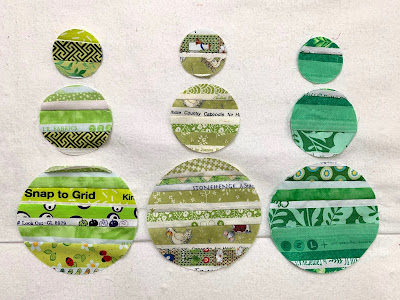 Nah..... What the heck am I going to do with a bunch of circles besides appliqué them to blocks. And I don’t like appliqué. Plus they didn’t use any selvages to speak of, so Plan B was a bust. Those circles have made some new friends, however, in the scrappy block orphanage. On to Plan C. 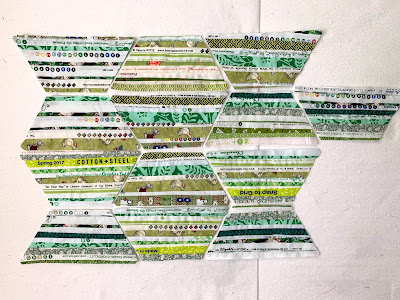 Now we’re talkin’! These are half hexagons that measure 4.5” across the top and 8.5” across the bottom. Lots of straight sewing and cutting, and a super selvage eater!!  They will be sewn in rows either vertically or horizontally (no inset seams), so there’s lots of potential here. That left me with just some smaller selvages, which necessitated Plan D. 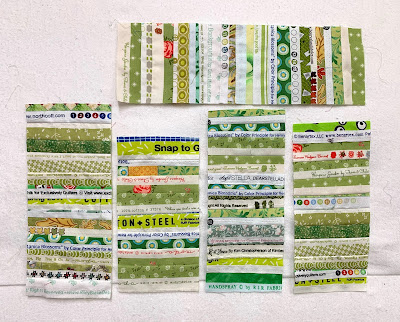 Columns of 4” wide selvages. These can be added in to an orphan block quilt down the road, or whatever. Again, lots of possibilities. And that finished off all my green selvages, at least for 10 minutes or so... which brought me to the firm decision that this is the LAST year I’m going to sew selvages. I have to tell my friends at Quilts for Kids (who save them for me) to stop. There are just too many and I don’t want to spend a week every month sewing selvages together.  I’d rather be digging into my fabric stash and making a major dent in it.

So, I’ll continue just this year with my selvages every month; 8 log cabins, lots of half hexies, and then the rest in 4-inch columns. What I accumulate (inevitably) between now and the end of October, along with what doesn’t get used, will go to some unsuspecting person who might like to play with selvages themself. I’ll mention it again toward the end of the year and you can speak up then.

So finally I got to sew with fabric instead of selvages. What a concept! First thing I made were these 8 Twin Sisters blocks, which measure 6.5” unfinished. 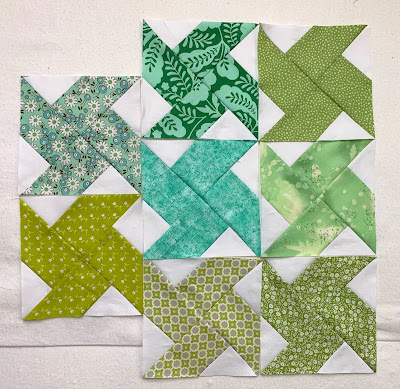 And then I made a 16” block called Scraptastic Stars, which is a pattern from Melissa Corey at Happy Quilting. I have to confess, however, that I didn’t buy a pattern because it’s so basic - I just figured it out and sewed it on my own. I’ll make one of these blocks for 9 months, and that’ll be large enough for a kid’s quilt. 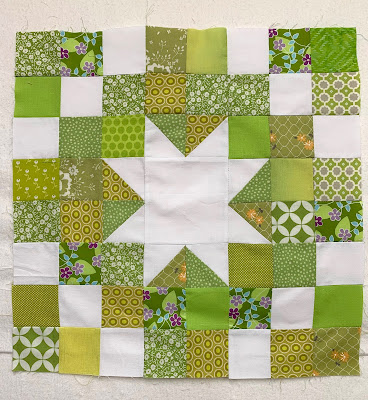 After all that green, I needed a break. So, I finished sewing the blocks together for this Little Orphan Scrappy quilt.  Can I say how much I love this? It measures 42x50”.  I’ve also cut the backing for it, so now it’s ready to be basted. Quilting will have to wait until my regular machine returns from the spa. 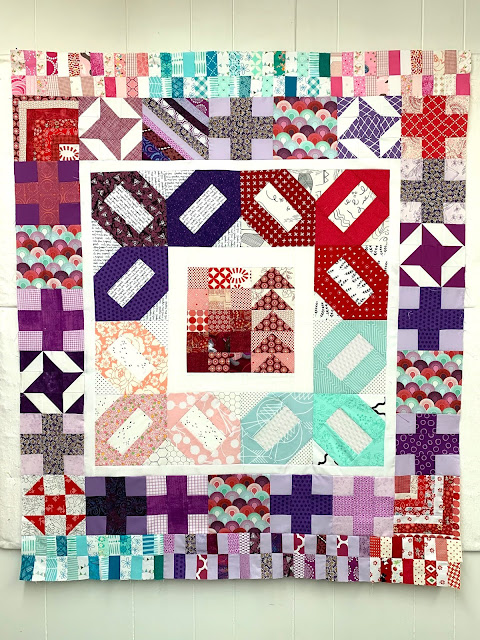 About that time, another Squirrel project scampered across my path. One of the shelves in one of my fabric storage bookcases came loose and fell off its supports (it has been fixed). But I had to take all the fabric off the shelf and fondle stack it up to fix the shelf. I found some already-cut brown polka dot 5” squares and matching fabric that one of my Weight Watcher friends gave me a few months ago. It was buried there with some matching turquoise fabric I’d pulled. What was I to do? I cut all the turquoise scraps there and tried to come up with a a quilt top using only what I had. It’s not a real looker as far as quilts go, but it’ll keep some kid warm and use up some unloved fabric. 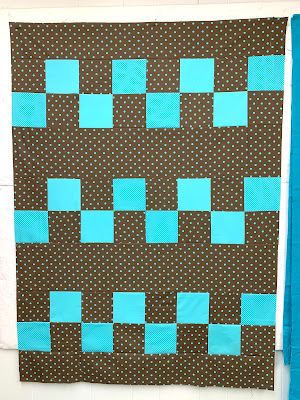 Cousin Kim and friend Bonnae came over on Wednesday for sewing and we’ve all decided to sew on some Farm Girl Vintage blocks together. Bonnae started the house block and I started the hand mixer block. Kim hasn’t quite decided where to start yet, although she wants to do the animals, truck, barn, flag and a few others. She wants it all in her head and planned out before she starts. I get it.

Have a good week, friends! I’m linking up to Scrappy Saturday at Angela’s blog.
Posted by Cathy at 8:53 AM