Kicking off 2020 with some Creative Goals

Forget the usual New Year’s Resolutions!! Why bother? With anything that has worth on a long term basis (spending time with family and friends, losing weight, becoming more active, eating healthy, giving of one’s time or talent to charity), most of us do our best to incorporate those things into our daily lives anyway. At least, I do. I may find new way to do something occasionally, or perhaps to tweak routines with aging or the seasons, but basically those priorities form the framework of my life.

So since this blog is mainly about my creative pursuits, with occasional sharing of family and other personal stuff, let’s get right back to the nitty gritty. 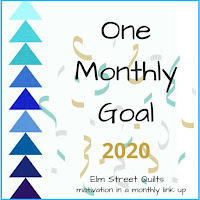 Once again, I’ll be participating in One Monthly Goal (OMG), a year-long creative online link-up run by the talented Patty Dudek of Elm Street Quilts. Each month we set ourselves a goal of finishing up some old project, and then post again at month-end to show what we’ve completed. This is my third year participating. Last year in 2019, I set a goal every month and finished each one. Twelve for twelve! Woot!

For my January 2020 goal, I would like to finish this “UFO” (unfinished object, for the uninitiated). It’s another kitty quilt for the grandcats. They got a similar one at Christmas, but this one has aqua stripes in place of the lime green. 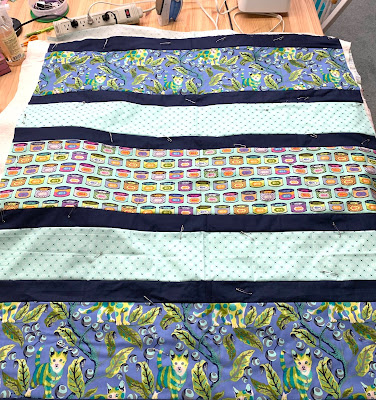 As I write this post, it’s already quilted but doesn’t have binding. My Bernina 550QE (“Bernadette”) needed to be taken in for its annual spa treatment, so I got all the quilting done on these three small quilts. Now I can finish up the bindings and start the January Rainbow Scrap Challenge blocks on my backup machine, “Bob”, the Brother Innovus. There is a method to my madness. 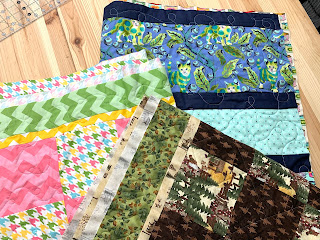 The other two quilts (in front) are just small kid quilts for Quilts for Kids. I didn’t sew them, but I’m one of the ladies who does the quilting and binding. You can see that these have the backs cut 1” larger all the way around. We just fold over the backing and do a self-binding by machine. In 2020, I plan to continue quilting and sewing for our local Quilts for Kids group. I enjoyed learning to load and quilt on a longarm quilt machine last month, and when the opportunity arises to use one, I will. However, most of the time I’ll just be using my trusty little Bernina to quilt.

While waiting for Angela to announce the Rainbow Scrap Challenge color of the month on January 1, I decided to trim my low volume scrap strips into widths of 1.5”. 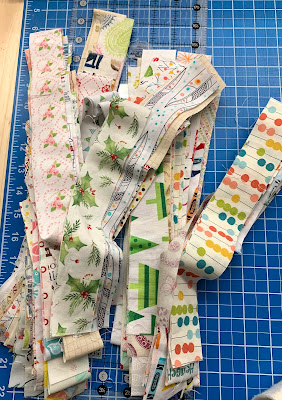 The strips are in preparation for joining in with Scrapbusting Star challenge over at Em’s Scrapbag. I’ll be working to reduce some of these low volume strips over the next few weeks.

FINALLY January 1st arrived. No partying here. We stayed up until midnight, hugged and kissed in the New Year, then went to bed. End of story!

Light and bright Green is the January Rainbow Scrap Challenge color of the month. We’re saving the darks and drabs for later. When working with selvages, however, I combine all greens. Anyway, my first block is a selvage log cabin. 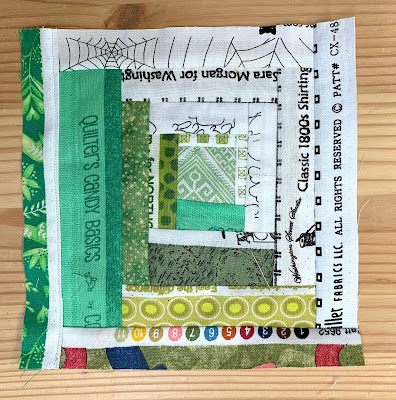 Because the strips in the block will be determined by the width of the selvages, the block isn’t  intended to be perfectly symmetrical. I’m just going with the flow. And this time I’m trying the regular method of joining fabric strips; that is, flip and stitch. Usually with selvages I join them by topstitching them together and leaving a raw edge. This time I want more of the color to show. I’m still using a very short stitch length (1.5), however.  There will be many more of these blocks to come!

The contrasting light portion of the log cabin blocks will be drawn from my bags of white and black or gray selvages. I have a few. Here are some with the greens for this month. The mini-iron is shown for scale. 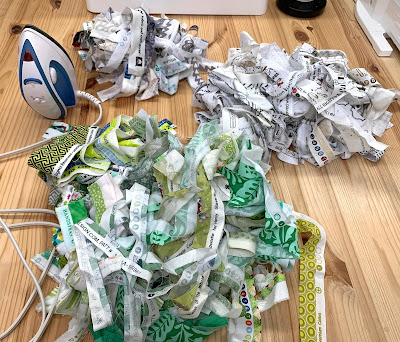 Next week I’ll introduce more of the RSC blocks I’ll be working on over the course of the year. I haven’t had time to make them yet. But I did get my green scraps sorted (and a bazillion little half-square triangles sewn together), which is a feat in and of itself!

Finally, I want to show you another Rainbow Scrap project I’ll be working on this month in between RSC blocks and other things.  I’ve had this piece of fabric in my stash for a couple years. Although the colors matched the recent Newport Butterflies quilt that I made for Kim, and I considered using this 2-yard piece for part of the backing, the style did not match. What to do? I decided to use it to pull from my stash of orphan blocks and put together a scrappy quilt. 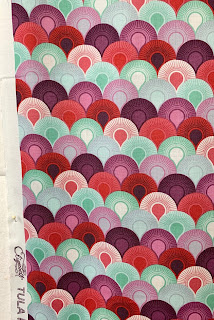 I also had 80 Cracker blocks (at 7.5”) from last years Rainbow Scrap Challenge. My first intention was to sort the blocks into 2 separate color ways to make two quilts for Quilts for Kids. But no matter how I played with them, they lacked pizzaz; I was not feeling the love. So, I pulled the Cracker blocks in red, pink, purple and aqua to match the fabric above. 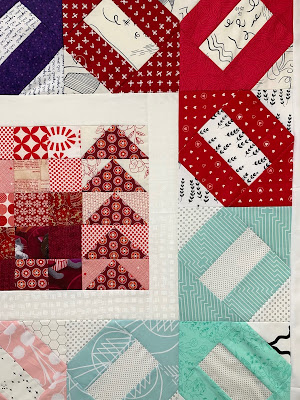 After adding a white 2” strip around the center block, I grouped the Cracker blocks in the four corners, and this is what I got. 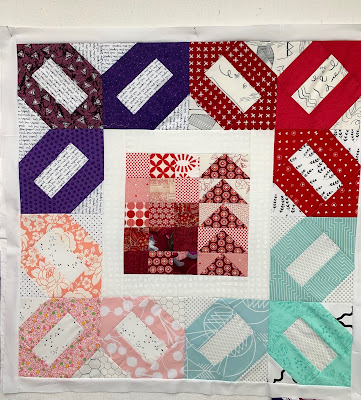 Yes, this is feeling better! By adding another white strip around the perimeter, it brought the measurements up to 30x30”, which meant I could then work with my 6” orphan blocks for the next step. So I pulled all my purple, red and aqua orphan blocks. I left the pink out, because actually the pinks are more just the shaded reds in the fabric. I have plans for them later.

Hmmm..... putzing around on the design board. I obviously need to distribute those blocks better. And it looks like I’ll be a few blocks short. 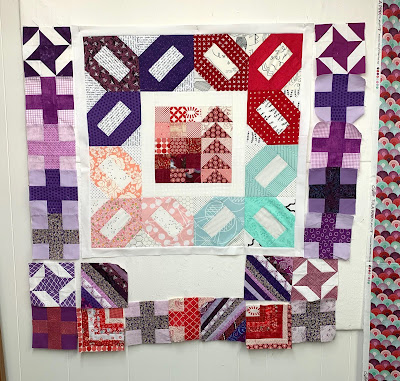 The four red blocks were moved to the corners. And then I cut a few blocks from the focus fabric to fill in the missing spaces. Yes, this will work.... 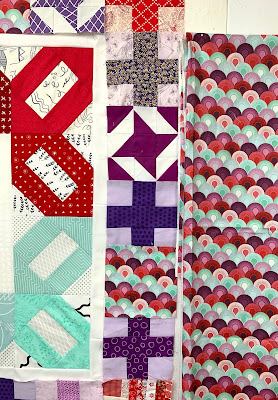 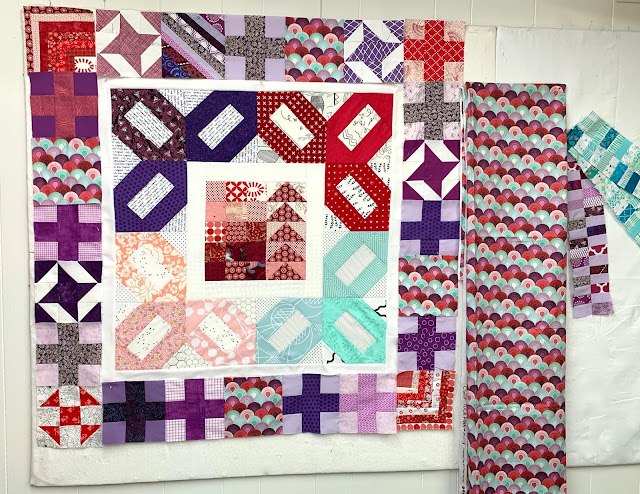 When sewn as shown, it will measure 42x42”. I may add some of those bitcoin strips (at the right edge, and the red strips are not shown). If I do, I’ll add them at the top and bottom only so that the little quilt will measure approximately 42x50”. A good size for a kid donation quilt. The backing will  be the matching fabric. I’d like to get this top done this month.

And that catches us up on the sewing front. Cousin Kim and friend Bonnae and I went to see Little Women on New Year’s Day and had a blast. I’ve been eating too many French fries and too much popcorn over the last couple weeks, and will be so glad when my Weight Watchers meetings resume next week and I can restore some routine into my eating habits. And then I must begin preparing projects to take along on our annual Arizona trip next month. More about that later in the month...