This month we are working on using our orange fabric scraps in the Rainbow Scrap Challenge.  And it’s going to be a fun and orange-y linky party today at Angela’s So Scrappy blog because it’s Rainbow Scrap Saturday.

This year I’ve been starting out each new color of the month by sewing up my selvages. And this month was no exception. I was able to get 12 selvage squares of 6.5” and three of 4.5”. That brings me to 67 blocks in the 6.5” size. 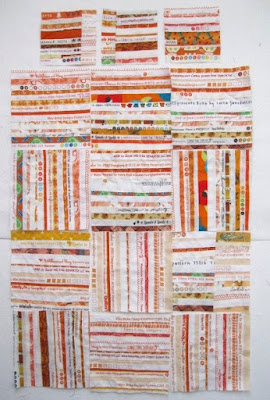 Now I’ve been through most of the rainbow colors, but I still have lots of scraps left in browns, blacks and grays, dark blues and multi-colors. I’ll probably work on the brown ones this month too, as Angela suggested brown as an alternate or extra color for this month. And I know we have another blue coming up, so the blues will be taken care of. After that, I’m not sure. I could stitch up the rest of the multi-colored selvages and get probably enough blocks (all told) to make a 60x60” quilt. Or larger if I sashed them or alternated the selvage blocks with another block. I’ll have to put my thinking cap on. Whatever I decide to do with them, it will happen sometime next year, not this year.

Next I stitched up six 4.5” bowtie blocks, bringing my total bowties to 288. And that completes what I need! 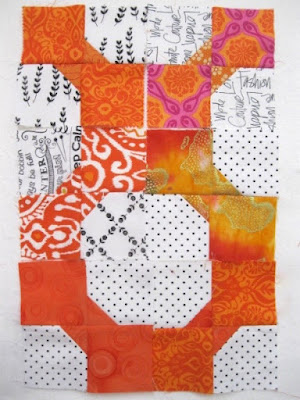 Also, I did some sewing on these lozenge blocks toward the end of last month. I’ve been working on this quilt for two years. So, this is how it looks as we start Orange August: 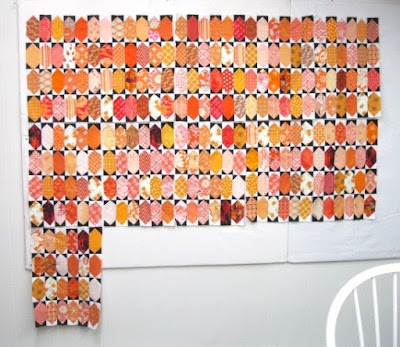 I have 11 out of 20 blocks completed - just over half. While we’re working on orange this month, I’d like to finish the remaining 9 blocks to complete the flimsy. All the lozenges and corners are cut, so it’s just a matter of putting the sewing pedal to the metal! But probably not next week; I will be working on other blocks instead.

My final note is just a happy share. Regular readers know that I joined Weight Watchers a year ago. I’ve not always been as diligent (like during the Holidays) as I could have been, but I’ve been persistent and consistent and managed to lose 37 pounds by my 1-year WW anniversary at the end of June. And then I went to Africa and had no control over the food that was served to us. But I could control how much I actually stuffed in my mouth!  The African diet is so full of vegetables and fruits that it was never really a concern to try new foods like the occasional nyama choma (roast goat), chapati, or samosas. And then there was the chocolate that I brought home from Africa and Amsterdam “for Bruce”, LOL. (Truly, it was for him, but I’d be lying if I didn’t admit to tasting some myself!)

Once home again, my first meeting back would have been on Tuesday the 24th of July, but it was a state holiday (Utah’s statehood day, Pioneer Day), so I didn't weigh in until the 31st. And I maintained my weight - I hadn’t gained an ounce! Yessssssss..... it was beyond thrilling for me! Now, with our garden veggies going gangbusters, good food abounds. I plan to buckle down and lose the final 30 pounds over the next several months. Anyway, blogging about this health journey helps me stay accountable. Thanks for reading if you got this far!