Our guest house in Narok had a great atrium full of lush plants and bushes. It was a joy every morning to walk out of our second-story room and be greeted by this sight on our way down to breakfast. Yes, that’s a poinsettia plant! 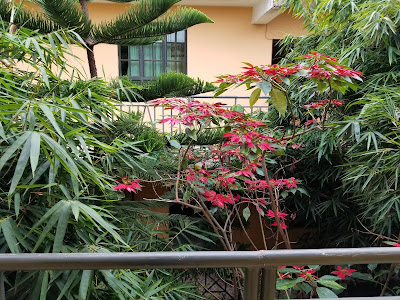 From our balcony, we had a view of the city, including herd of 9 cows on their way to pasture every morning at 7:15 a.m.
.

Granddaughter Lauren and daughter-in-law Kim on the balcony. 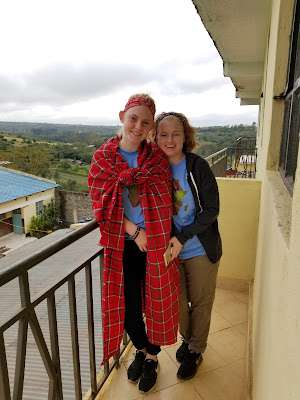 Our hosts, Oldere (OD) and Marilyn gifted us all a shuka - a Maasai cloth that can be used as a jacket, scarf, blanket, cape, etc. Its use (began mid-20th century) replaced the traditional leather of centuries past. You’ll see it here and there throughout the pictures. 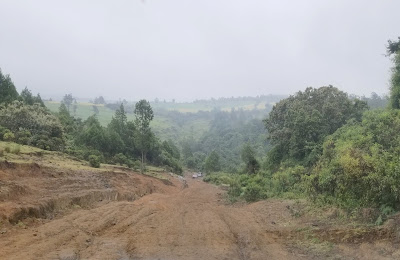 On Wednesday morning we loaded up the vans for a day trip to Tenkes Primary School up in the mountains of the Mau Forest. The paved road ended when we left Narok. From there up the mountain it was a deeply rutted dirt road traversed by pedestrians and boda-bodas (rented motorcycles used as taxis) alike. Villagers from the mountains walked down the road (no such thing as sidewalks in Kenya) with goats, chickens, charcoal or whatever they had to sell. Children walked up to their schools. It’s difficult to gauge the distance. Had the road been paved, it would have probably taken us roughly a half hour. However, given the condition of the road, it was three to four times that. 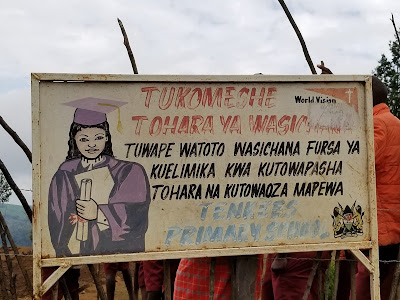 When we arrived at Tenkes Primary School, we were greeted by hundreds of children (don’t know the exact count, but we were swarmed!). They treated us like celebrities. It was humbling and felt so undeserved. 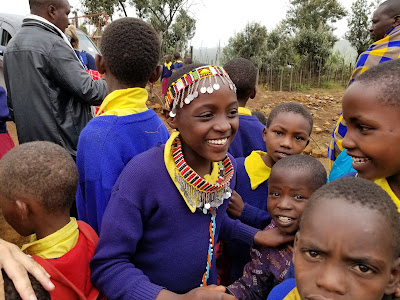 Many of the older girls were wearing their traditional jewelry and costumes because they had a performance planned for us after lunch. 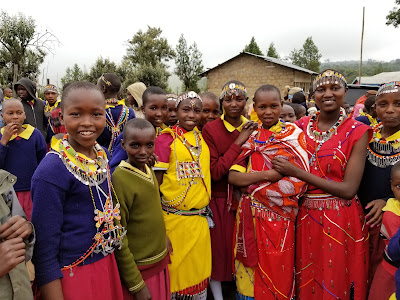 But in the meantime, they wanted to say hello to us, practicing their English (“Hello, how are you?”) and touching our hair and skin. They were also fascinated with the Fitbit on my wrist. Several of the older girls remarked how soft our skin was compared to theirs and how lucky we were. But I told them that their skin was a more beautiful color, so we both had good and not-so-good things to deal with. 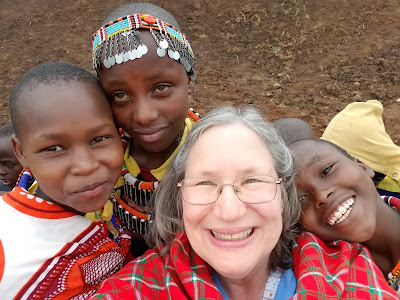 Most of the children had discolored teeth, which I remarked on later to our hosts and group. One of our group is a dental hygienist, and explained that Kenya has one of the highest levels of naturally-occuring fluoride water levels in the world. The staining is called dental fluorosis. The fluorosis is merely aesthetic, and their teeth are otherwise very healthy and strong. 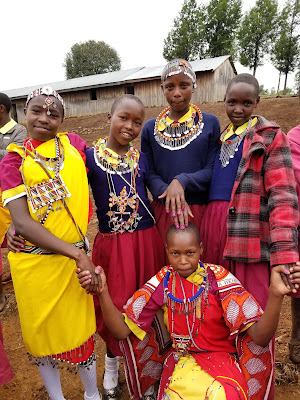 In the picture above, note the building in the background. That is one of two classroom buildings. There is a separate kitchen for cooking school meals and a separate latrine, discussed below.

Our first order of business after the greetings was to visit a washroom (the term used in Africa). At this school, the facilities were a very rough latrine, with one side for “Gents” and one side for “Ladies”. Our term for it was “squatty potty”, because they were just holes in the ground. 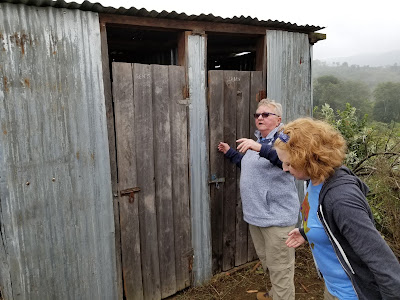 Here one of our group, Ellen, holds the door on the ladies side while my DIL Kim waits her turn. After our visit to the latrine, we used our packed hand sanitizers.

Next we handed out composition books, pencils and pens, erasers, pencil sharpeners, stickers and more.  It was an organized chaos, and the kids were appreciative. In many cases, the supplies they received would save their families the equivalent of more than a week’s worth of income. 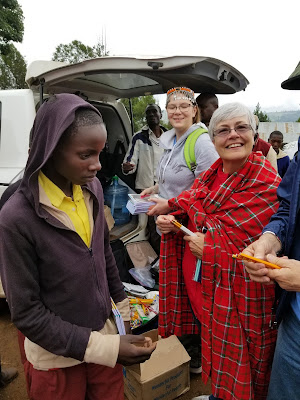 Above you can see part of the line; a school child receives supplies from Mary (gray hoodie) and MaryAnn (red shuka) in our group.

Next we planted some of the 300 tree saplings we brought. Here is my granddaughter Lauren planting one of the trees. 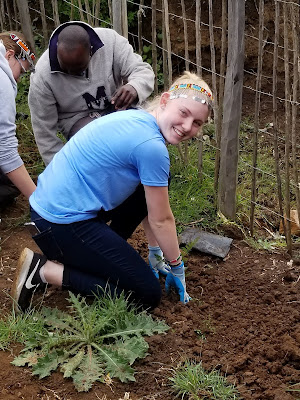 Many of the children were given trees to plant at home. The saplings will grow into trees and become a tangible savings account for them. The money they can earn by selling its wood eventually will help fund a further education beyond primary and secondary school.

Next we were asked to walk into the bush up the hill with the elders of the village (Entiak). They had slaughtered a goat and prepared a meal for us in celebration of our visit. This was the view across the road from the school. The Mau forest is breathtaking. 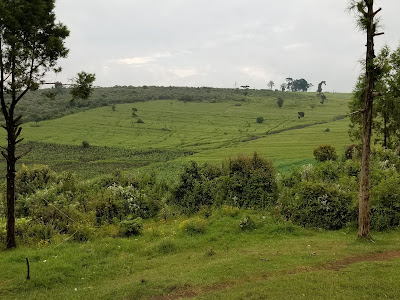 Just up the hill we passed their newly-built church. Most of the native Kenyans in this part of the country are Christian. The population of Kenya also includes a lot of Muslims, although they are concentrated more near Mombasa, by the coast of the Indian Ocean. 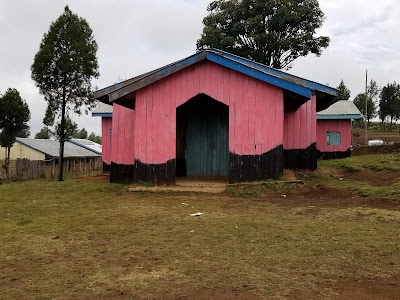 The Maasai ladies and girls had warm water and soap and greeted each of us as we took turns washing our hands. We were then directed to sit on cushions of mountain sage that they’d prepared for our seats. 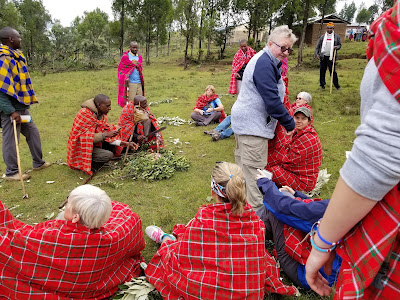 After a speech by the head elder (translated from Maasai by our host OD), we were served nyama choma which means roast meat. This roast meat may be goat or beef, but is usually goat, as it was in this case. We all chewed on the pieces offered, and then the young girls passed out a delicious complete meal for us. We ate a meal of chapati (traditional tortilla-like bread), potato, rice and vegetables, plus another piece of nyama choma. The helpings were beyond generous, and our copious leftovers were scooped up for ???? (the goats? the kids?) 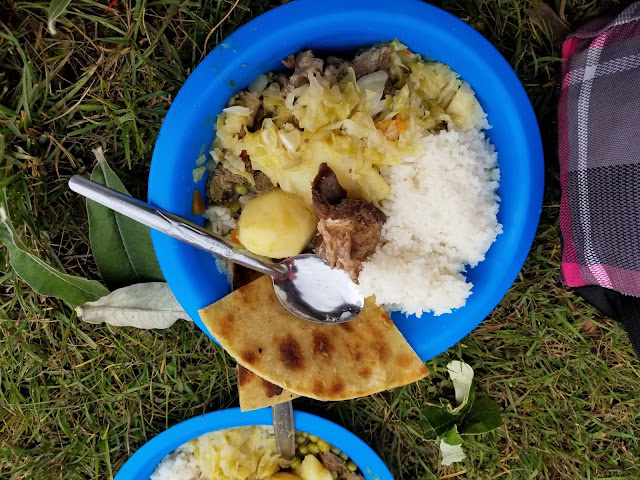 We were directed to use the sage leaves as the natives do - as napkins. And indeed, they were effective (and fragrant) in cleaning our hands of any grease and food residue. Further uses of the sage were then shown to us. The young branches, after being stripped of leaves, could be used as either a toothbrush (if left thick and fiber-y) or pared down by hand to make a fine toothpick. I was honored to have the village head elder clean my teeth for me. I think.

Next we were divided up into groups and enjoyed a ceremony in which we were accepted into the Maasai tribe and given our Maasai names. I have mine (and my DIL's and DGD’s) recorded, but the picture will suffice for now. My Maasai name is Nalakiti. It means (according to the elder’s speech): Admirable woman who walks in a stately manner, with grace. 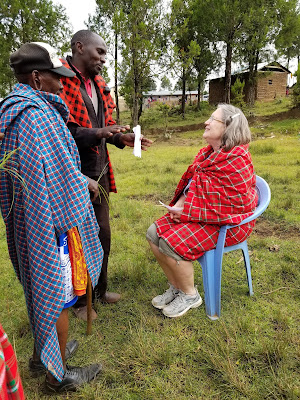 I learned in later days that the pared-down version is Woman Who Walks Slowly. Hahahaha!

We were escorted back to the school and up the hill (in my case with the head elder guy holding my hand - I kid you not!) to get a tour of the classrooms. After seeing the outside of the building in an earlier picture in this post, the inside should probably not surprise you. There are no windows, lights (although some solar power exists in the village), or other power. This wonderfully friendly teacher was very proud of his students and their progress. He teaches the Second Level, and next year will move with his students to the Third Level. 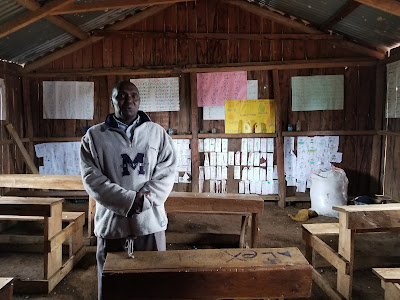 Next, we all were lead to some chairs set up for us, along with the village elders, to view the entertainment prepared for us. Here is Head Elder Guy and I sitting together before dancing started. After following me around, cleaning my teeth, holding my hand and sitting by me, I was wondering if this was usual treatment. Just then, he leaned over and whispered in my ear, in English, “Will you give me your........      watch??" 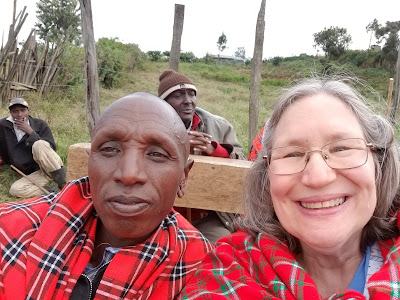 What a great many chuckles I’ve gotten over that story! Of course, I said no. Heck, it was my Fitbit, not some ordinary watch, LOL.

I have a couple great videos of the girls dancing, but am hesitant to insert them. Yeah, I inserted the few-second video above (fingers crossed it works) of Narok, but I recorded all 6-plus minutes of the two dances, and don’t want to push my luck.

Two of our teammates, Ellen and Shelly, presented the school with a number of soccer balls for the kids. In Kenya, soccer balls are worth their weight in gold. Below is a picture of them with the athletic teacher (holding the balls) and the school principal (extreme left). 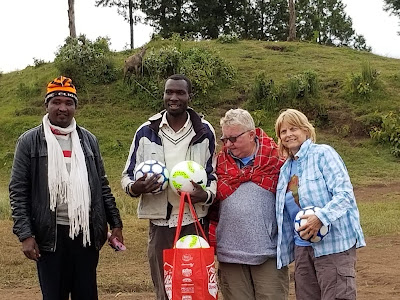 And that was our memorable day! All that was left was to traverse down the mountain. But we did stop to take a picture of this majestic umbrella acacia tree as the sun was setting. 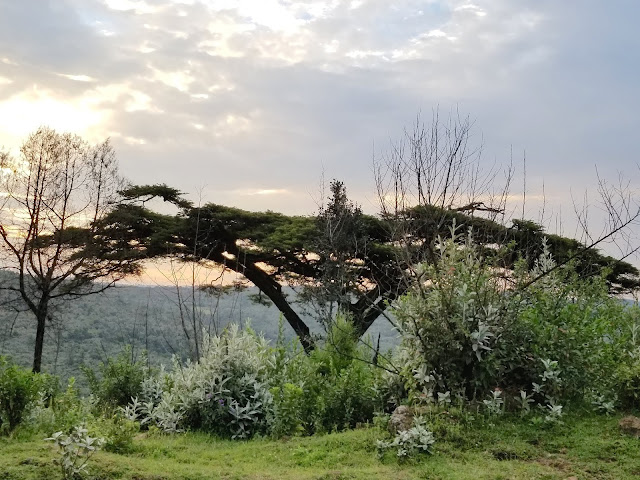 With a little luck, I’ll have a third installment of this travelogue ready on Friday. And then on Saturday, I’ll be joining in with the Rainbow Scrap Challenge ladies to round up my July red scrap sewing. Hope to see you back here!

This is the second post of my Africa trip.
See Part I HERE.
Posted by Cathy at 3:49 PM