One of the things our hosts hoped to secure for us was a meeting with a group of actual Maasai warriors. One day, our host Oldere (OD) got a call from one of his friends that a group of warriors were in the area and headed from Narok out into the bush along a highway.  They were waiting in the bush for us because it was unwarrior-like to meet with anyone (wazungu - white people - included) in an obvious manner. We piled into the vans and headed out to the designated spot. Sure enough, one of the warriors in his red shuka was at the designated spot. We crossed the road and followed the trail away from the highway. 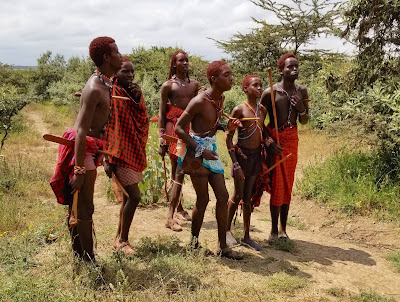 As we walked along into the bush, the first indication of the warriors was the smell. That is certainly not meant as disrespect; it turns out that they carry and apply rendered goat fat to use as a combination mosquito repellent and sunscreen. It probably has many other uses that the warriors have discovered over the centuries. We came into a clearing and there were six warriors.

OD served as our interpreter since he is native Kenyan and served as a Maasai warrior once himself. He explained that we could think of the warriors as the elite fighters of Kenya, much like the Navy Seals.  For centuries Maasai men have held myriad rituals that begin in boyhood (about age 10-11), including male circumcision sometime around puberty. The ceremonies are many and complicated, and even OD admitted that he was not familiar with all of them. And different areas of the country perform - or not - different ceremonies.

The Maasai warriors are not to be approached. They are accorded respect and distance when they do come into town. However, if the warriors need supplies, they can go into shops or visit farms, where people are allowed to interact with them and offer them meals in exchange for their protective services to the people. The group we met with ranged in age from 14 to 20. 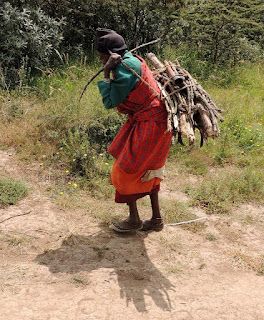 Shortly after explaining that, to us, an old woman appeared down the trail carrying a load of firewood sticks. She saw the warriors and stopped dead in her tracks. The leader (the oldest young man, age 20, with the long braids) called out to her her first, asking what she needed. She requested passage, and he granted it to her. 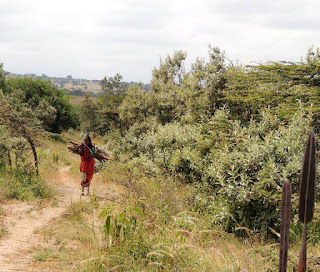 Everyone was silent until she was well past us and on her way. This woman had to be 80 years old if she was a day....

We asked about their red coloring, and they showed us their cans of red paint and goat fat. Red is the primary color of the Maasai tribe. They believe it scares away lions. 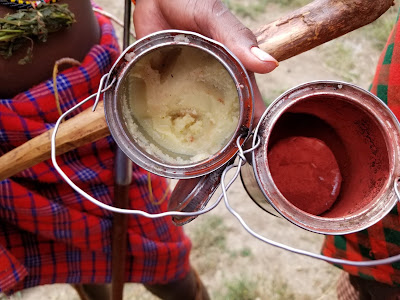 The warriors carried knives, machetes and spears and had no natural predators to fear in the bush. The lions and other would-be attackers are familiar with and fear the smell of the red creatures who smell of goat fat. There are so many interesting customs and facts, and we learned a great deal through their generous sharing and education. I found a really good article that explains some of these customs and facts HERE if you’d like to read more.

There was lots of posing and picture-taking, and we even had some Instax film and took instant pictures of them to keep for themselves and give to their girlfriends and moms when they returned home. One of the warriors showed us some of his ritualistic burns, a test of manhood and strength. 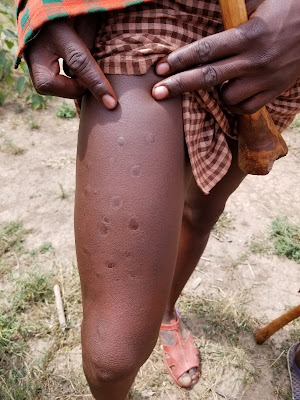 They performed a warrior chant and dance for us. 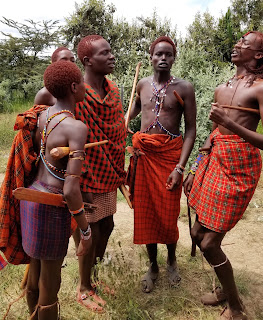 And, of course, they all jumped for us. I’m not posting some of the best pictures of that, though, because, um.... let’s just say that the young ladies got a lesson in anatomy. 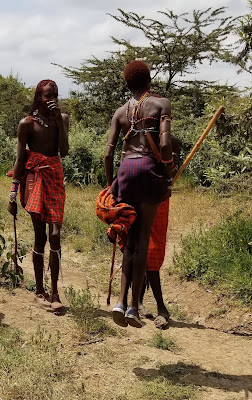 It was a great visit and I believe everyone was respectful to each other and made good impressions, if not actual friends!

This seems as good a time as any to post some pictures and show some of the things we saw and learned in our week in Narok.

The red Xs on signs show the world that this business owes taxes. They’re put on by government officials. I’m not clear if it indicated delinquent taxes or just that taxes were now due, because we sure saw a lot of red Xs!! 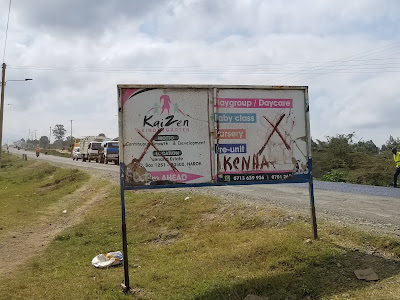 Here is dear, sweet Ellen (the comedian of our group - she lives in San Diego but was originally from Boston. Her sense of humor and accent never failed to make us all laugh!) This picture is taken in front of a little store (closed at the time) in a nicer neighborhood of Narok. 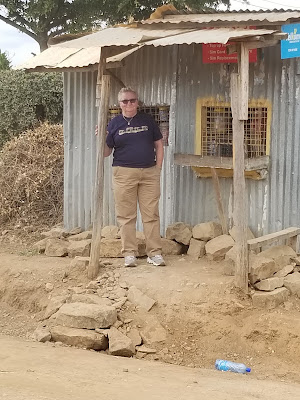 A building in downtown Narok. 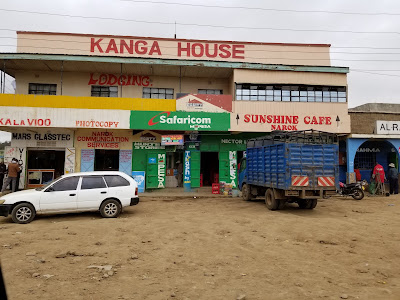 And off on the side streets, you can find dress shops and all manner of stores. And yes, dust is everywhere. Only the main roads are paved. 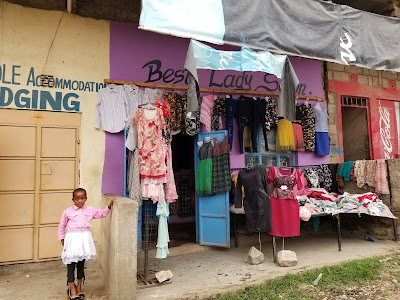 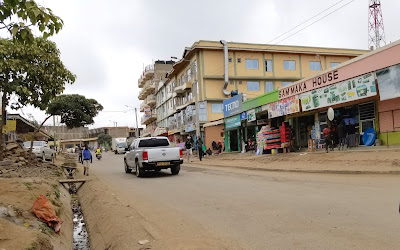 It’s very common for cattle, donkeys, goats, etc. to be in town on the roads too. The donkeys are usually tied to carts. In the picture below, it looks as those this man is bringing in barrels to be filled with water or milk before returning to his home or village. 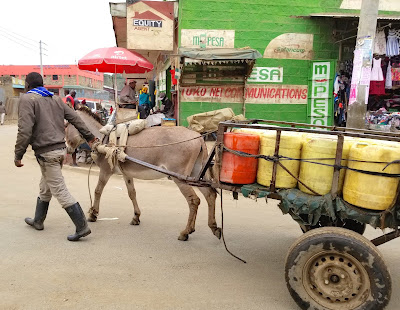 Lots of the people (primarily men) hang out. And in many places, the body-bodas (motorcycle taxis for hire) congregate too.  Did I mention - there are car washes everywhere? Not traditional modern facilities like you’d see here in America, but places where you can pull up to and have a person hose down and clean your car for a fee. There were car washes everywhere, and I’m sure they do a lucrative business! 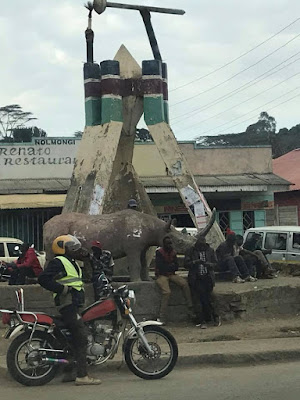 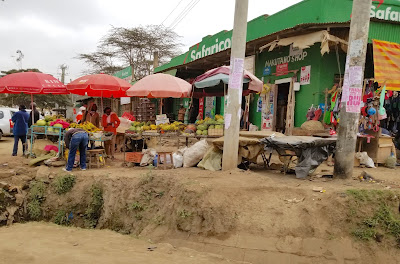 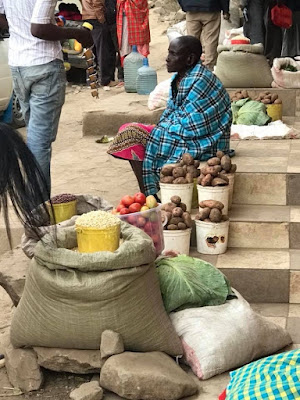 And on weekends, there are places where special, huge markets spring up! 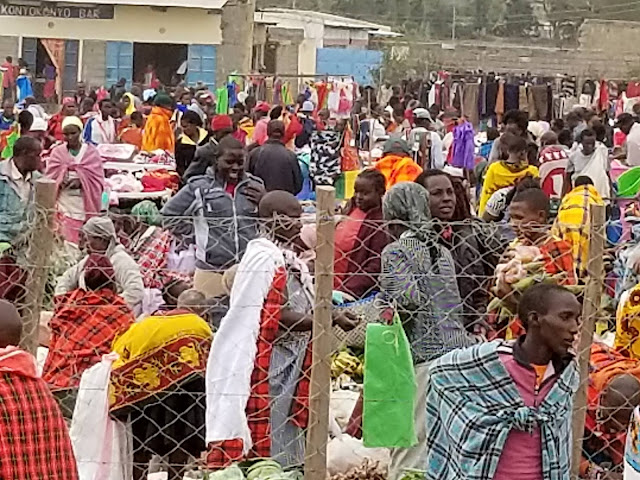 In my next post, we’ll visit a very poor, but utterly amazing and heartwarming primary school. And I’ll probably sneak in some pictures of some of the beautiful flowers, bushes and plants we saw.

For other posts of my African journey, here are some links: