One Monthly Goal for February

Once again I’ll be participating with Patty at Elm Street Quilts in her great motivational link-up, One Monthly Goal (OMG).

I participated last month and finished up my Starry, Starry Day quilt in January. And now I’m working furiously on my brother Steve’s Hot Rod Quilt.

These fabrics have been hard to put together because they come from so many sources. Several of the pieces with blue backgrounds (dragsters) came from a shirt that Steve bought years ago at a swap meet. It appealed to him because it showed scenes of dragsters from some of the California venues he used to frequent when we were young. In fact, the (now-defunct) Irwindale Raceway was a few cities over in Southern California, and we could hear the races every now and then. 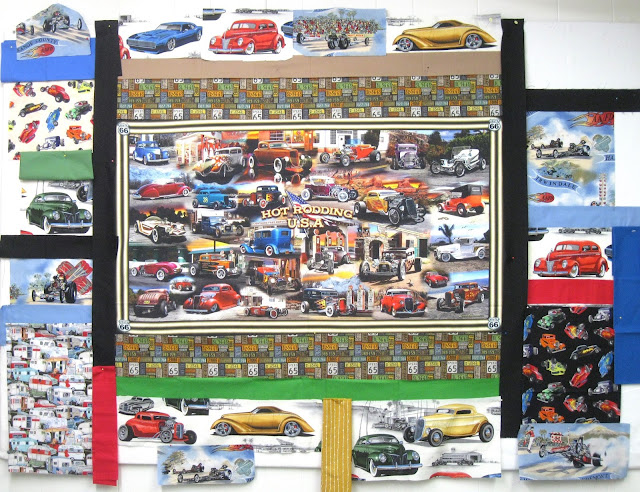 Steve is into anything “cars” - vintage cars, hot rods, etc. He bought his first car - a 1947 Chevy - when he was 15. Couldn’t even drive yet. But guess who had to drive it? Moi. Yep, I had to learn how to drive a stick shift (in 1970) on this 1947 with a starter button, a huge clutch that looked like a ..... well, never mind. Oh, and it did have a horn - an oooga horn. I learned while having to drive Steve to his dentist appointment after school in it. Stalled it about a half dozen times, with Steve yelling at me and his two friends (along for the ride) laughing and hooting. Once I got the hang of driving a stick shift it was a fun car to drive. But  the next year Steve got his license and that was that.  But I digress......

I have finished piecing the quilt front and back (lots of leftover pieces), and basted it yesterday. The quilting will begin this weekend.  I want to get it done before we leave on vacation next week.  :-)