Here we are near the end of January. It’s been a long, cold month, but at least it didn’t seem as long as last year. Maybe getting out more often (to the mall three times a week to go walking), along with my other activities and errands, helps the yucky winter days to pass more quickly.

This is the last week to post our blue scraps for the Rainbow Scrap Challenge before Angela assigns the February color.  I usually do a collage to sum up my progress, and I will continue that this year. So here we go. I had a total of 51 blocks this month. 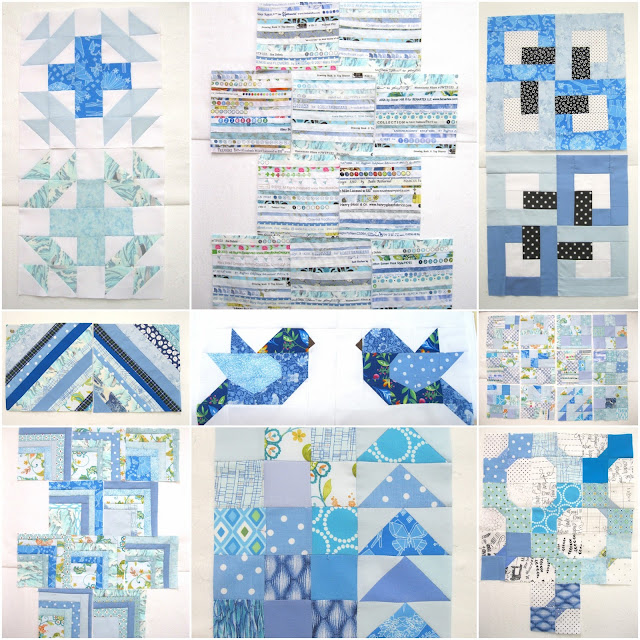 I am ready for a new color!

Last week I realized that I’d never given a weight loss / health progress report (it keeps me accountable) in my end of the year/end of December recap. So, I’ll combine two months into one. December went well, eating-wise, until the neighbors started bring over treats and we decided to a family cooking bake-along. Long story short, I lost, then gained, then lost most of that. Bottom line was that I ended December weighing .2 LESS than I started. I was happy with that.

For Christmas I got a Fitbit. I’ve been working to increase my daily steps. I’ve always been a relatively sedentary person. I worked in an office and had sedentary hobbies (sewing, reading), with the exception of gardening. But that’s not an option in Utah in winter. So, Bruce and I began mall walking three times per week, and it has noticeably strengthened my legs, helped me feel so much stronger (and younger), and helped the pounds peel off. I have to remember that I’m losing pounds, not years! So far in January I’ve lost 5 pounds. My next weigh-in is Tuesday, so it could be a bit more or less before the actual month end. Anyway, total loss to date is 34.2, and I am close to moving into the next size down again in pants. Yay! My goal is to do that before we leave for Arizona on the 8th without having to lay on the bed to get the zipper zipped! Raise your hand if you’ve ever had to do THAT!   Yeah, Diann, I see you with your hand down. You’re naturally thin, LOL!! 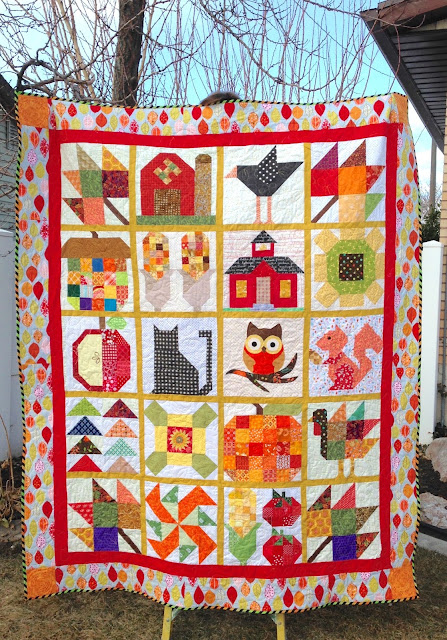 And as the title says, I did have a quilt finish this week. It was rather unplanned. You see, DH Bruce sort of backed into the neighbor’s car when he left for work the other morning (it was dark and as the mirror says, “objects may be closer than they appear”). No damage to neighbors car, thankfully,  but it broke his truck’s rear tail light. Our neighbor, who is a prince and a gentleman, even ordered the part for us because he gets a discount. Anyway, Bruce and Steve will replace the tail light  this weekend, but I’ve been bummed out about it for reasons that aren’t really important (and that I can’t even put my finger on anyway). I felt I needed to find a happy place, and for me that was doing some zen-like sewing or quilting. So I pulled out my basted Autumn Quilt and spent two 2-hour sessions quilting it in a loopy, leafy, and whatever-floated-my-boat-type of motif. The border orange cornerstones even got big spirals. Because I could. 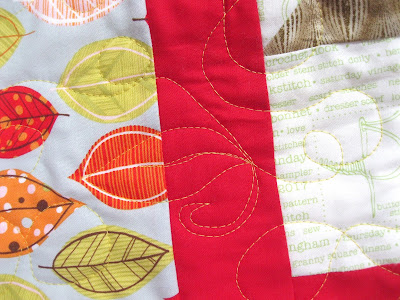 I quilted it with a 50-weight Aurifil in a golden color. I usually use 40-weight, but I still have a couple spools left over from a 50-weight set I bought a few years ago, and this golden yellow seemed perfect for the Autumn Sampler. The binding is my usual Warm and Plush. The quilt finishes at 64x79”.

The back is a piece of yummy flannel that I picked up on sale last year during the Utah Shop Hop. It is actually a bit darker than the picture shows. Anyway, all in all a comfy fall quilt which will is late for last year or early for this year. Take your pick! 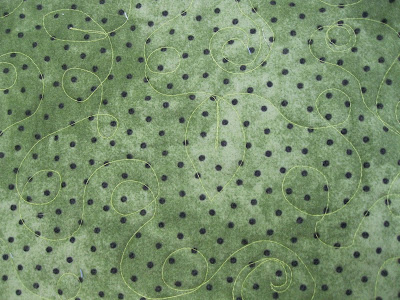 This quilt was Goal #2 on my first quarter 2018 Finish-Along list, here.