The weather outside is frightful......  it has been snowing virtually non-stop since before dawn. To say it’s a winter wonderland would be apt if it weren’t Monday. Sure glad it’s a day off for Bruce, and that I am happily retired.

But while it may be cold and snowy outside, it is very cheery and bright in our bedroom! OK, minds out of the gutter, please.  I mean my Rainbow Orbs quilt that I finished last week-ish. I have now also finished the two euroshams and the bedskirt. 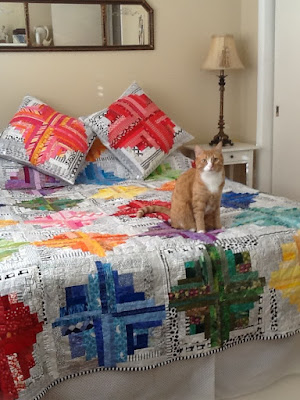 Alfalfa (and Darla in other picture) OF COURSE had to be part of the action. Anyway, you can see the completed shams. They measure 24x24” and were each made with four 12.5 inch blocks.  The orbs in the quilt were 16” finished (four 8.5” blocks).  The shams have a slip opening in back for easy laundering. 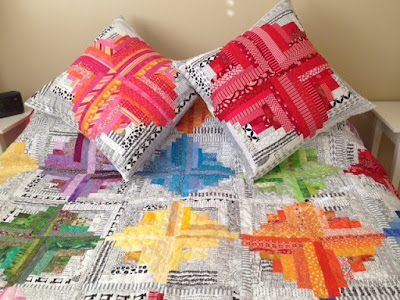 The bedskirt is a small black dot on white (a Riley Blake fabric) that I used to make long strips which were stapled to the box spring. And I also (see picture) fashioned a pleat on each side.  The idea came from a tutorial I saw online somewhere, but after a week I’ve decided the industrial staples are not a permanent solution. I'll have to sew the skirt to a flat sheet (hello, thrift store).

The pillowshams were Goal #3 on my Finish-Along goals for the 4th quarter of the year, which you can see here.  This is the 7th finish out of my 10 goals. I may be able to squeak another one in before the end of the year. 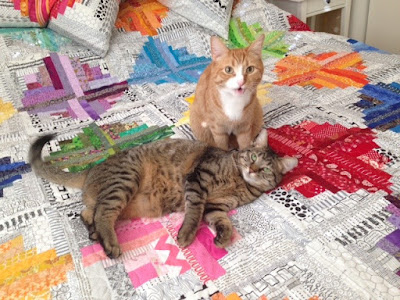 I had to add the picture of Alfie and Darla above. I didn’t notice their expressions until I was editing and enlarging the pictures. It looks like Alfie is saying something and Darla is just rolling her eyes (“WhatEVer”)!

I still consider myself a very new/green quilter. And this monster quilt (80x96” approx) was a real challenge to quilt on my Bernina home machine.  I started off doing long rows of alternating loops.  After a couple rows, a heart sneaked in and I rather liked it. 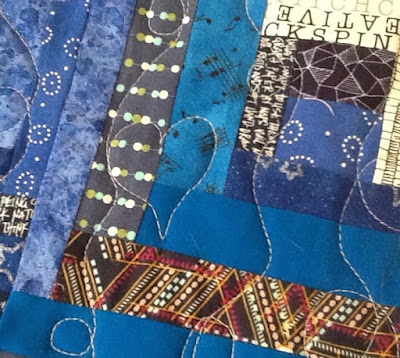 So I tried to include hearts in bright color areas where they would show up. Just because. And it’s kinda cool to search for the random hearts now and then. 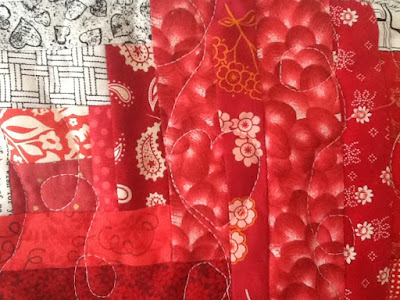 The backing was a mixture of white on black and black/white fabrics and the gray thread seemed a happy medium although it looks white in the picture below. The picture proves what a novice I am at quilting. I decided to show it, warts and all because although it’s not perfect, it is certainly good enough. And I am improving. 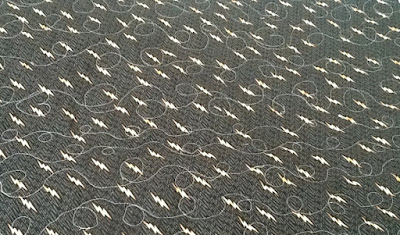 I’ll be back later in the week with a couple Farm Girl blocks to show you. I just need to photograph them first. And this afternoon I am quilting the I Spy quilt I threw together, so that will be something, too.