Groundbreaking: 2 Pantone Colors of the Year

As soon as I hit the “publish” button on yesterday’s post, the Wall Street Journal announced the news that two colors instead of one had been selected as the Pantone ColorS of the Year for 2016.  In light of that, there was no way I was going to miss this morning’s Pantone webinar (free, but “sold out”, and luckily I had my reservation) wherein Pantone explained their choices.

First, I want to say that the images used are with Pantone’s permission.  Secondly, the presentation was made by Laurie Pressman, Vice-President of the Pantone Color Institute. Without further ado: 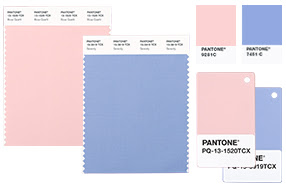 The first color is Rose Quartz, described as a warm, compassionate and embracing hue. And then there is Serenity, a weightless, airy, cooler color that symbolizes respite and relaxation. Together they symbolize our desire for creating balance, harmony, peace.

At first I was skeptical about the colors. I thought “blue/pink: boy/girl. I get it.”.  But there is so much more to the story.

First of all, the Pantone Color Institute combs the world for influencers: travel, technology, fashion, street art, packaging, trade shows, photography, home furnishings, basically anything and everything. Their selected colors are REFLECTIVE of emerging trends reported.  Pantone showed us slide after slide of products, people, packaging, photography etc. to literally blow our minds with the uses to which these colors have already been put.

Individually, these colors have their meanings, but together they are synergistic. They fuse together to represent harmony. In most examples, the two colors were used together, often along with their lavender-ish resulting mix.  Lots of light, sky, pastels.

And then Pressman went into a discussion about the current turbulent world events and what it means to all generations - from Boomers to GenX, and others.  We are all desirous of creating balance and harmony in our lives, separate from the world stage. This harmonious color pairing creates tranquility, and is emotionally reflective of the desire for inner peace.  Refuge. 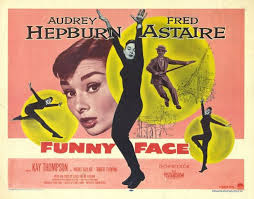 There was also a slide show showing how the “traditional” Pink is for Girls and Blue is for Boys came into being. As recently as the 1920’s, pink was considered the stronger color and was designated for boys. But after WWII, the shift began, and the movie Funny Face and their mantra “think pink” cemented the Pink is for Girls mindset, particularly in the US.

"Pantone believes the blend reflects a gender neutrality that has strengthened over the last year or so and is sure to carry through to 2016 and beyond", said Pressman. 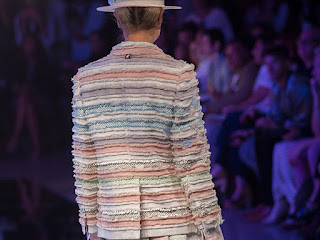 Yes, we’ve seen it before in the 1960s and 1970s (and beyond) with androgynous styling in pantsuits and then into women’s tailored suits and ties. But it is different this time in that not only are women selecting what was traditionally considered masculine styling, but men are exploring their feminine sides. In combination with not only defining themselves through their jobs, they are taking on more parenting and cooking, and wearing softer colors; lavender, pink, pale shades. Menswear is evolving.


A significant part of the market is recognizing gender neutral styling. An example that hits home to the average person: Target stores have removed their pink Girls and blue Boys signs. Their children’s clothing department allows kids to mix and match the colors and styles that best fit them individually.  In fashion, the trend is to think of the individual as the “canvas”, that can be clothed - without regard to stereotypical colors or styles - a statement that reflects the individual. 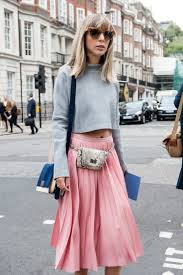 So there you have it.  Colors that set a mood: peace, serenity, balance and harmony.  Colors that are blurring the lines of gender identification (in that all colors, like people, are equal). Colors that speak to our desire for inner peace and tranquility.

They have a lot of hype to live up to.  Personally, I would have taken the easy way: sunshine yellow.

Labels: Pantone Color of the Year