I am linking this post up to the Bloggers Quilt Festival at Amy's Creative Side. Visit and vote here.

This quilt has been rumbling around in my head for a year and a half, since my DS Ryan married his love of many years, Kim.  We all went on a cruise in the summer of 2013 and then they got married on the beach at Cocoa Beach.

First, Ryan and Kim got to pick the colors, and then I showed them lots of pictures for style.  The quilt was loosely based on the pattern for a baby quilt called Flowers in the Sunshine by Sweet Jane on Etsy.  But we wanted a larger quilt, so essentially I began collecting fabric by quadrupling the size and fabric requirements.  Sometimes collecting fabric for a project is hard to stop, so I ended up with lots to chose from.   :-) 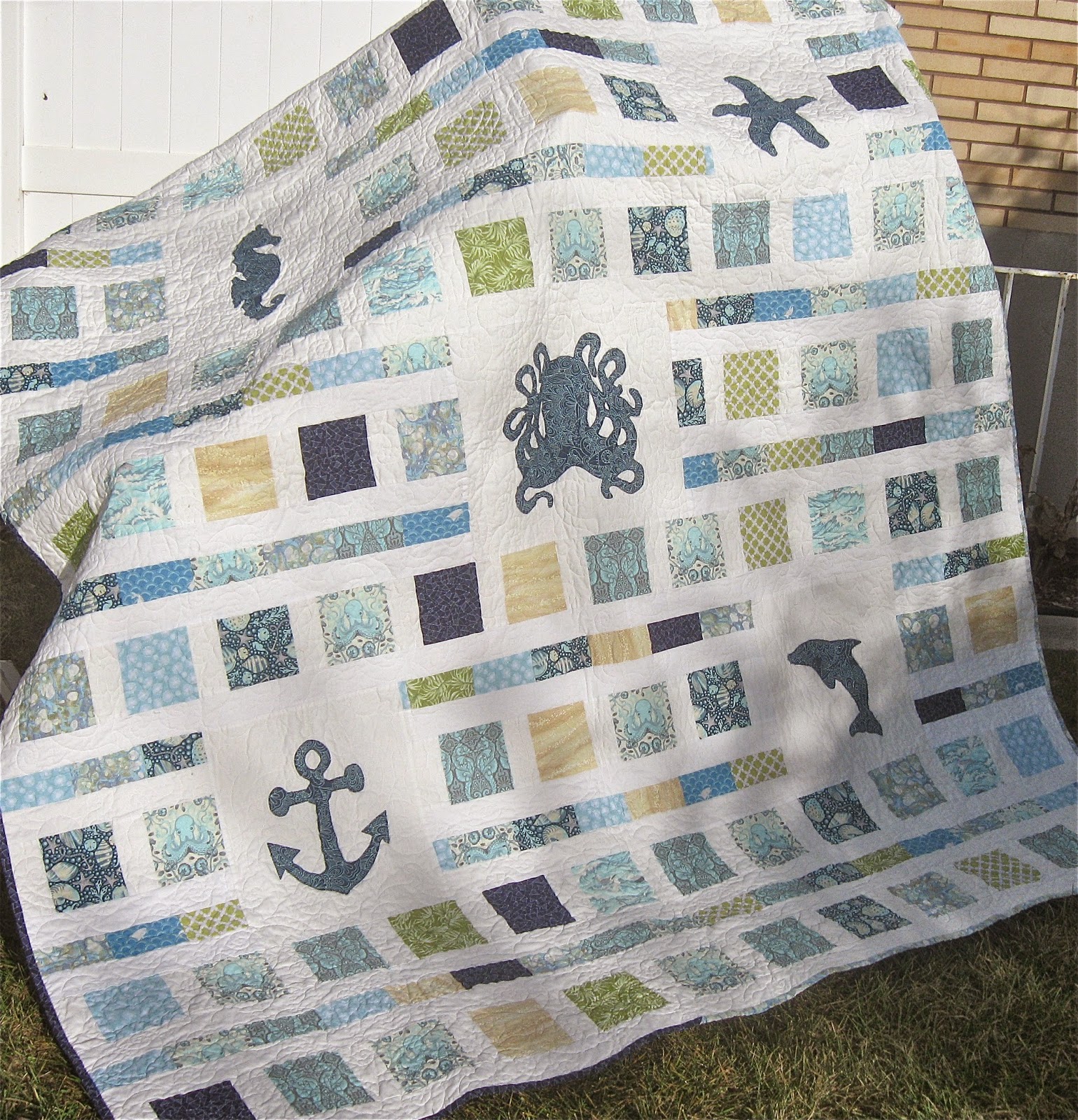 As I started the piecing process, I realized I wanted large motifs in the quilt, so worked out a plan to have four; a seahorse, a starfish, an anchor and a dolphin. 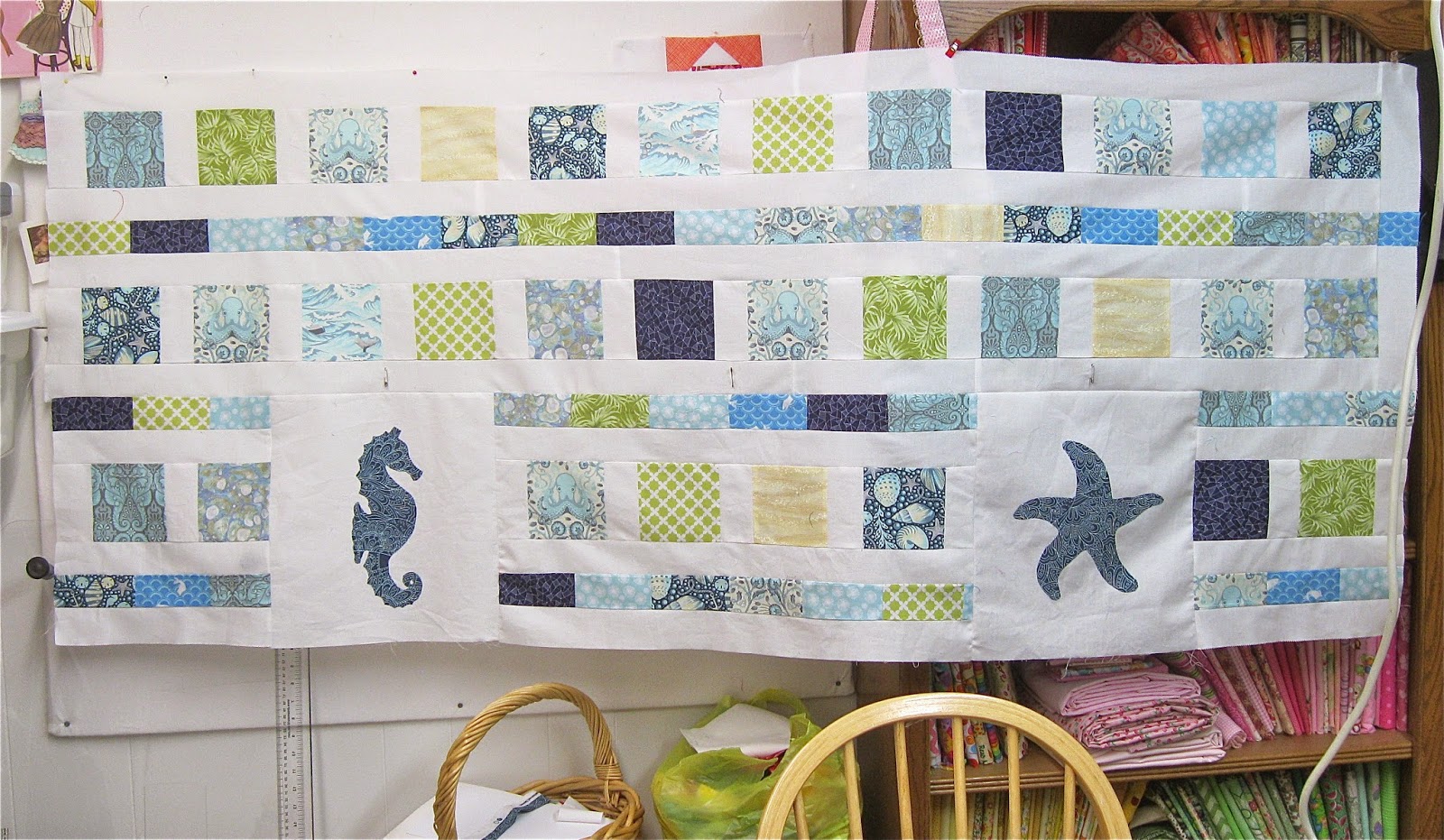 But I couldn`t leave out the octopus which was the featured character in Saltwater. So, he got pride of place as the large central motif.   For the octopus image, I traced the octo from Tula’s line, then kept enlarging and simplifying it (knowing I was going to have to stitch down every tentacle). 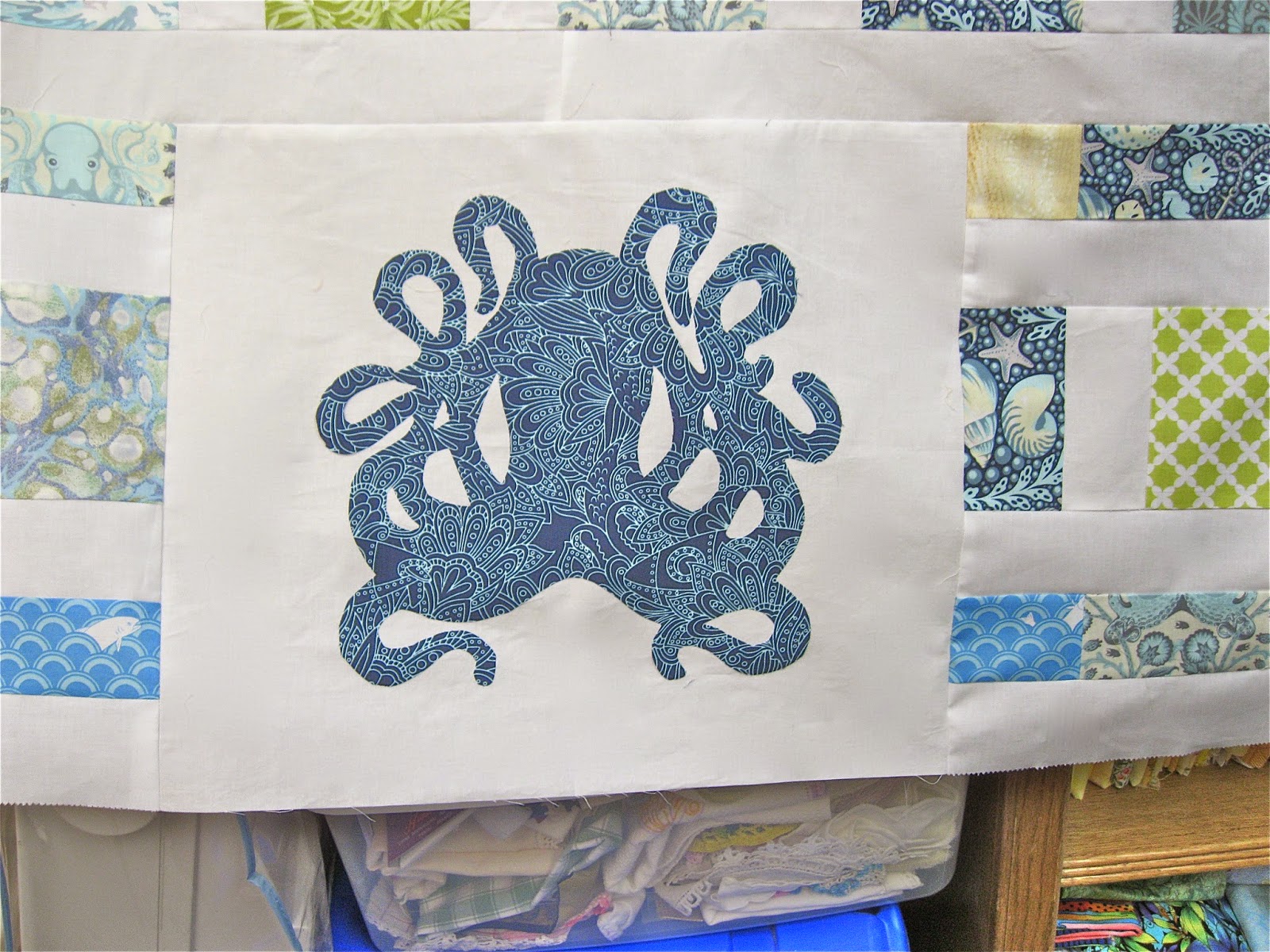 The other images I just pulled from the internet or my imagination and then enlarged.  All fabrics were backed with a fusible onto which I drew the pattern in reverse, then cut out.  They were fused to the white fabric and then stitched down before being pieced into the quilt. 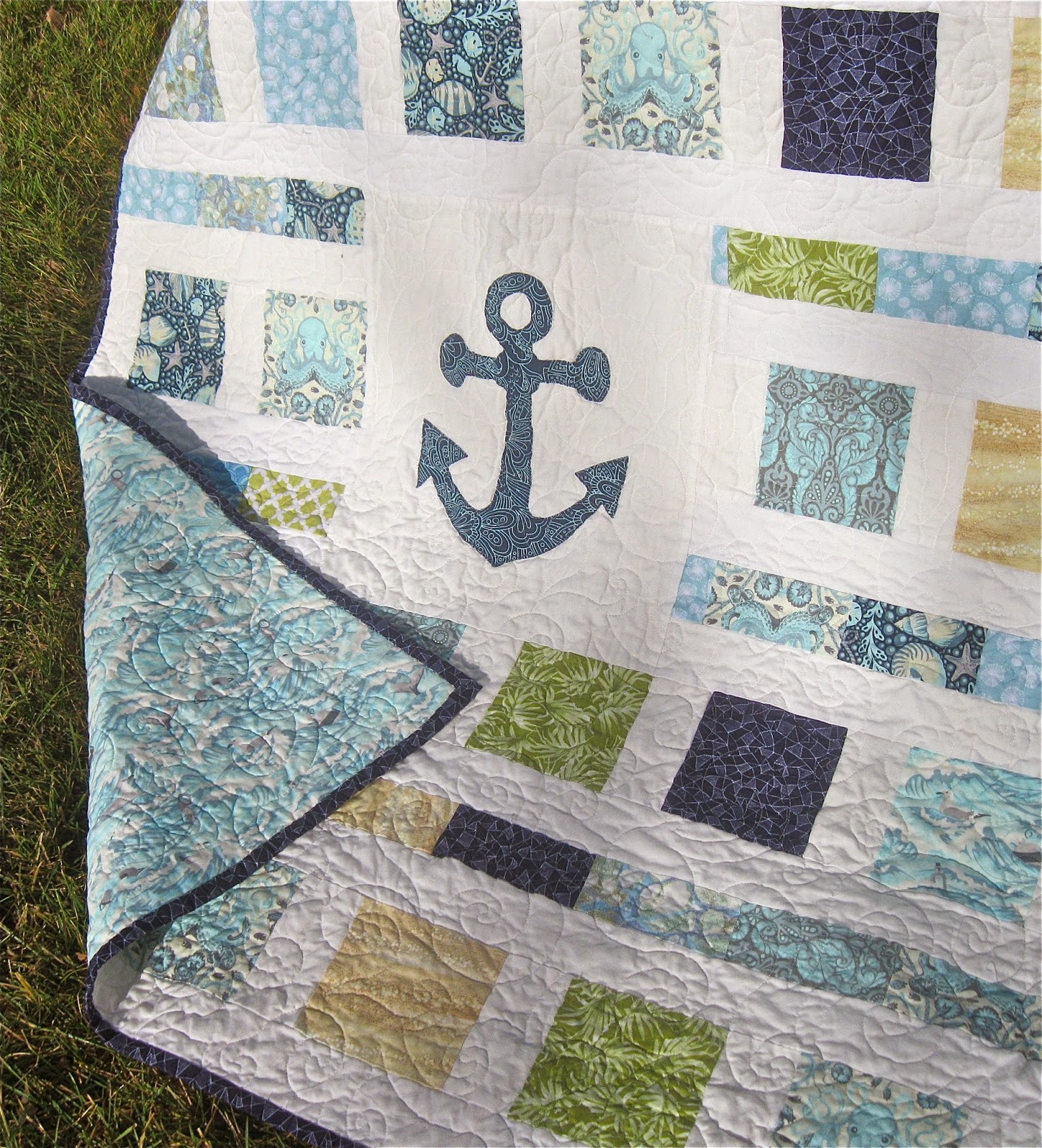 I was waiting for a sunny day to get outside to take pictures, and once I got out, I kicked myself for not taking pictures when it was cloudy with more diffused light. So, these will need to be retaken. 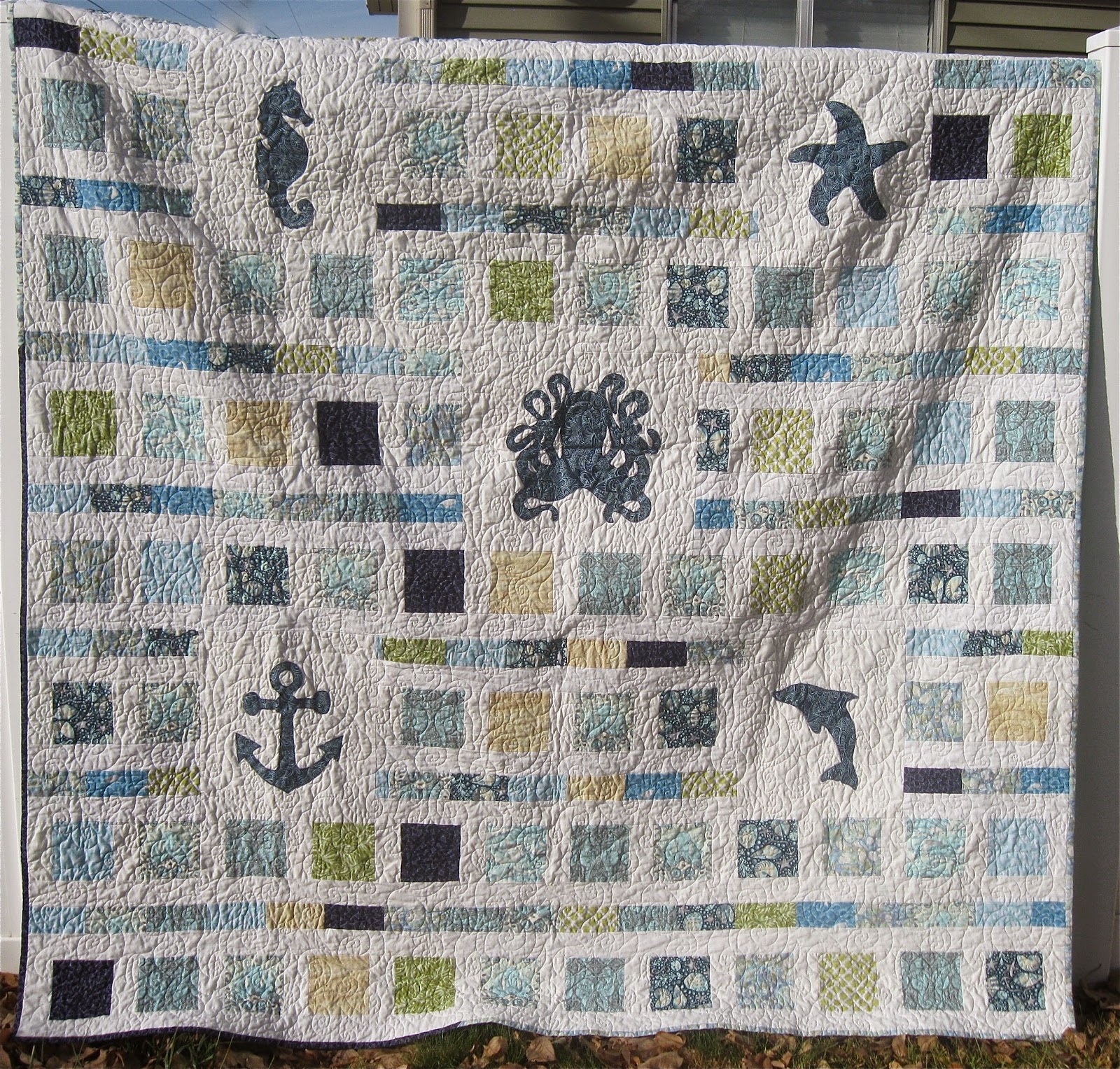 After finishing, there was a lot of time spent snipping threads so they would not show through the white. And then it was off to be quilted (by Quilted Works in St. George, UT).  I love the swirls they did - reminds me of ocean water and looks especially nice with the backing print, Sea Debris from Saltwater.  The binding is scrappy leftovers. 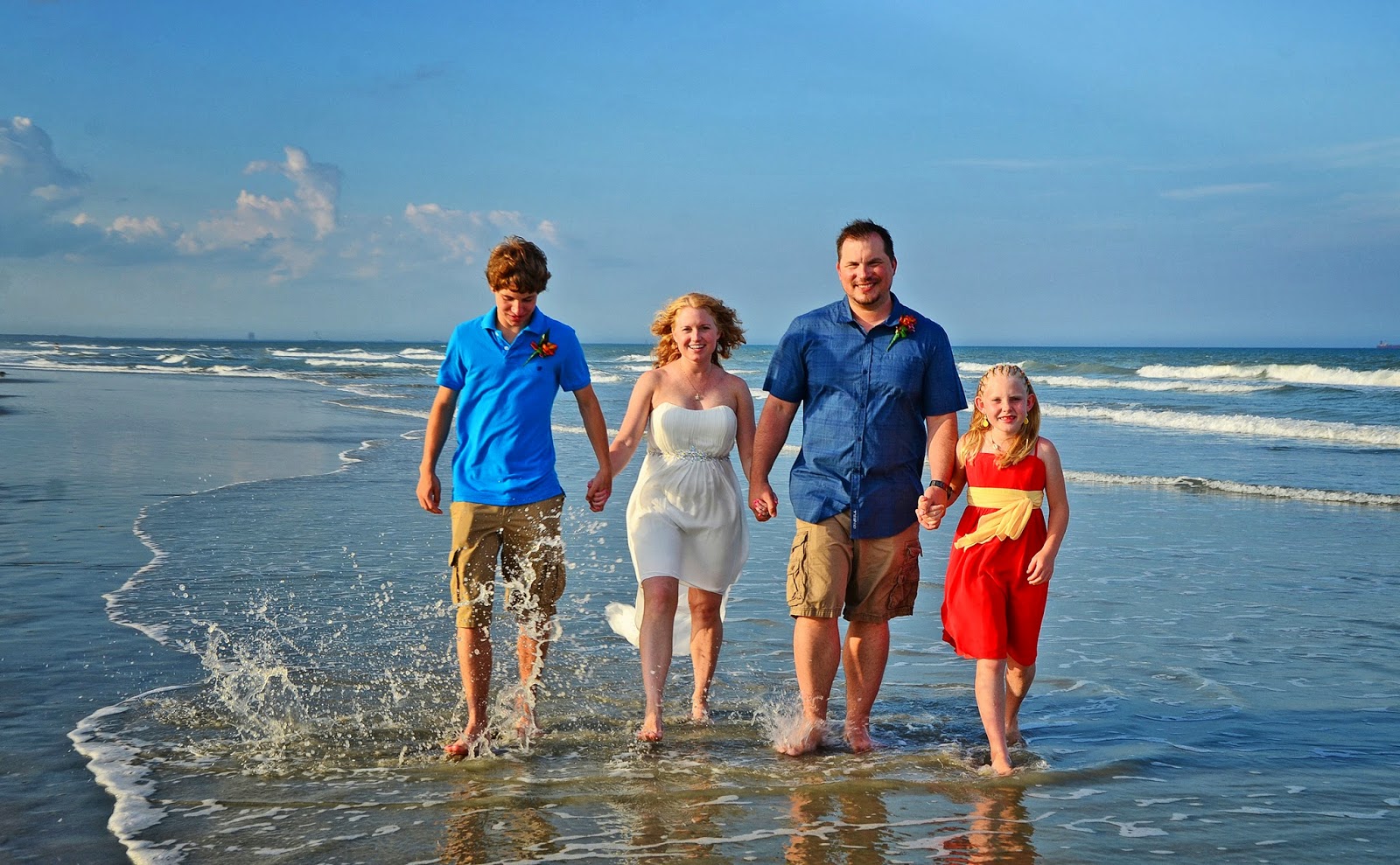 Although it’s been a year and a half since the wedding, (and over 8 years that they’ve been together as a family) this is the first wedding picture I have posted.