Whew. This was a hard round robin because it turned out that Steampunk is more easily interpreted with “things” than with stitching. But working on Colleen’s block - the last one for me - was really fun. Of all the blocks in the round robin, I believe hers had the best background (“canvas”) on which to work, and it was also the largest at almost 15x15”.  Colleen had even stabilized hers with a thin fleece-type backing, which was not only brilliant but necessary. 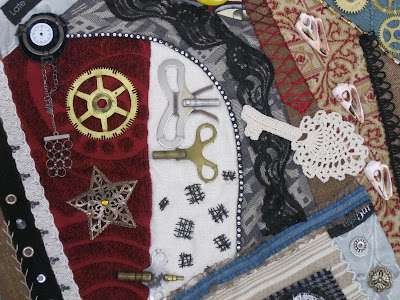 Then I added an old crocheted key motif, which I had been holding on to for the perfect block. This was it. The block was large enough to handle it, and keys are such a great Steampunk motif (so is black and heavy lace). It also served to break up a lot of the vertical directionality of the piecing and trims in that area.


Kathi S had added the winged heart on the right (on the scrap of wool), so I decided to repeat the motif with a vintage-look heart button and some metal stuff that looked like wings.  Another spot on the block would have been better, but being the last one to work on the block meant that there were not that many open spots. 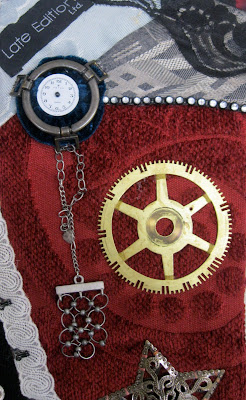 The clock and metal circle were already on the block, and they rather reminded me of a watch. So I added some old broken chain (gotta love broken jewelry!) to make it look pocketwatch-ISH. 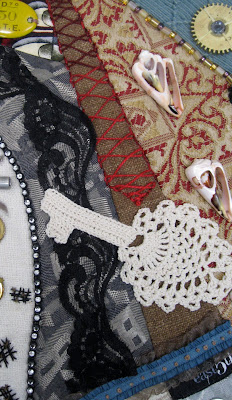 And finally, I topped it off with some STITCHING, which I was itching to do (tacking on THINGS doesn’t count as stitching).  So, I laced the thin brown patch with some variegated perle cotton.
I love the way this piece turned out - very textural and so much variety. Colleen - I hope you like it!  It will be winging its way to you in the next few days.
And now I will focus on cleaning up my studio for the rest of the week so I can decide which project(s) to tackle next.  I am really thinking that my Seascape Valance needs some attention, and I hope to begin piecing my big CQ by 2012.  And I have a couple other ideas up my sleeve, but I will save those for another post.
* * * * * * * * * * * * *
In the meantime, I have added fabric packages to my Etsy shop.  It seems I get one big category tackled every week or two.  Next I would like to add sewing supplies (zippers, gripper fabric for children’s feet in sewn items, and so much more).  But next up will be the Zipper Flower tutorial first...
By the way, the Anniversary Sale in my Etsy shop will continue through the end of the month, so feel free to use it even if you have already purchased and used the code already. Just type in JULY11TENPERCENT during checkout (where indicated for coupon code) and your discount will be deducted.
Until next time,