Last weekend I finished another block in our Steampunk Round Robin at Crazy Quilting International. As I worked,  I wondered how I could further combine traditional crazy quilting (motifs, stitching) with the Steampunk style.  Steampunk is often described as “Victorian Industrial”.  Think of Jules Verne, fantastic flying machines, or a computer that looks like an 1890’s cash register. 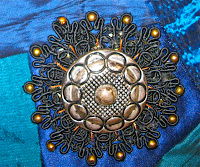 Earlier in this round robin, I had combined stitching with metallic parts, to come up with some varied Steampunk motifs.    This included both seam treatments and individual motifs fashioned of buttons, beads, washers,  and lace.

Because the block belonging to Kathi S was constructed in blocks (you’ll see it momentarily), each square or rectangle lent itself to a motif.  Also, all the seams were stitched down with raw edges showing, giving it a very basic, building-block feel. Perfect for a steampunk backdrop.

The first motif I added was a zipper “rose” surrounded by a gaudy old earring topped with a filigree charm.  The other earring from this pair (which I found in a North Carolina flea market for 25 cents) appears on my Images of Africa quilt, LOL. 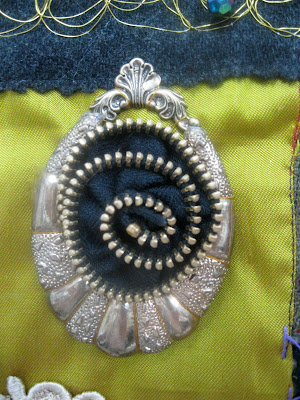 I had bought large lot of these black separating zippers to sell in my Etsy shop and wanted to try it out first for flowers, as zipper flower embellishments are quite popular now. It worked great - I just ran a gathering stitch along the tape side, then pulled to gather it a bit. After that, I just coiled it and tacked it down. And I used about half of one side of the zipper, so the entire zipper would make 4 roses!  I think I will need to add them to the shop!
But by far my favorite motif was this Steampunk take on the traditional friendship circles in Victorian embroidery.  These are three rings from an old necklace I had.  Cool, huh? 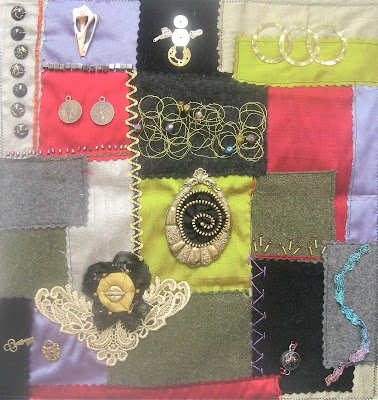 Here is the block as it now looks. It will be on its way to the next stitcher in a day or two.