We finally got our first snow of the season this week. YAY!! It began on Thursday morning and stopped about noon on Friday. The accumulation here on the valley floor was about 3-4 inches, and about double that up in the mountains at the ski resorts (who’ve had to resort to making snow before this week). We are thrilled. Unfortunately, our snow blower, which had no use last year, has the throttle stuck in the open position. Bruce couldn’t get it unstuck, so we’ll have to take it in for a tune-up. I shoveled the front walkway and some walking paths on the driveway, but our wonderful neighbors across the street (dad Jason, mom Jen and son Riker) came over early in the evening and shoveled the rest of our driveway and sidewalks. We love them to bits! So today we need to get more ice melt and take the snow blower somewhere. Fun (not!)
There was plenty of sewing this week. First, I finished the Christmas Presents quilt for myself. The only Christmas-themed quilt I’d ever made for us before was a jelly roll race quilt in my early days of quilting. It had a red Minky (cuddle cloth) backing and I quilted it on one of my old machines. I used red thread, a big mistake for a beginner. The quilting was hideous and there for everyone to see in glaring detail. Also, the tension was bad in places. But my granddaughter London loved it, so I gave it to her. And almost ten years later it’s still going strong. Go figure.
So, here is the quilt. The pattern is a free one from Kate Spain called Flurry, after the fabric line she released at the same time. After I quilted and bound it, I threw it in the washer so I could use it asap. Luckily I remembered color catchers (2), because they came out very pink and there were some areas of bleeding on the front. I washed it again in cold with more color catchers and it all seemed to come out. Phew! The quilt is nice and crinkly now, but the quilting, which I was reasonably pleased with, is difficult to see. 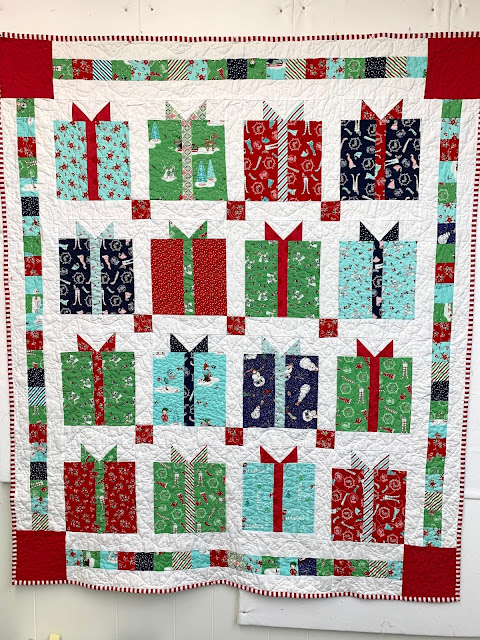 Christmas Presents (such an original name, LOL) finished at 54.5” x 58.5” before laundering. I love the smaller size as a lap quilt for me.
In the four red cornerstones, I stitched large flowers. 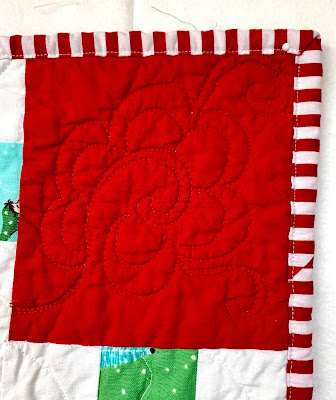 In the center colored strip of the border I just used a serpentine stitch. The white strips on either side were quilted with a meandering vine interspersed with holly leaves and loops. You might need to click on the picture below to enlarge and see the detail.  Also, each “gift” had a different quilting motif (stars, stipple, ribbon candy loops), with only about 3 repeats. 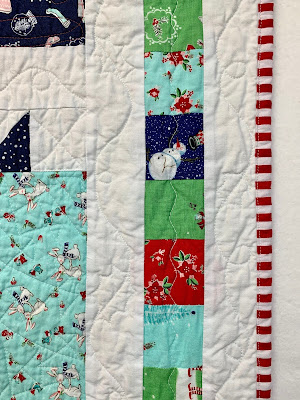 The horizontal and vertical sashings got either viney loops or viney hook curls. 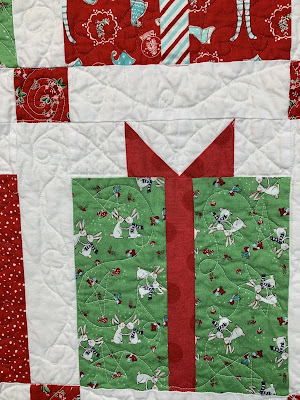 With that quilt finished, I moved on to assembling the Spring Star blocks I sewed all during the year for the Rainbow Scrap Challenge. This quilt fought me every step of the way during assembly. The blocks had a variance of about 3/8” inch, which means I lost a lot of points in the trimming. I ended up starching the front and the cotton sheet backing before basting to get them as flat as I could. 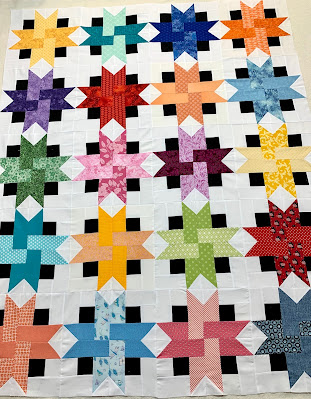 At this point, I just trusted the quilting and the washing/shrinking to take care of the rest. I quilted it with loops and it was fine, finishing at 48x60”. 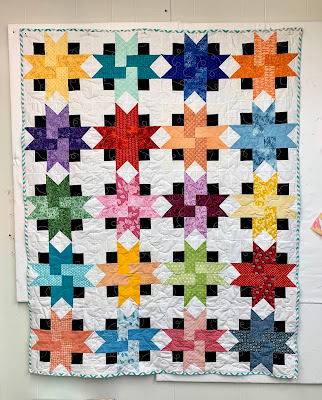 As usual, this will go to Quilts for Kids.  The quilting is a simple meandering loop, and with the fold-over binding from the backing fabric, I was wishing that I’d made those black squares gray instead. But when I started the blocks back in January, I had no idea of what the eventual backing would be. 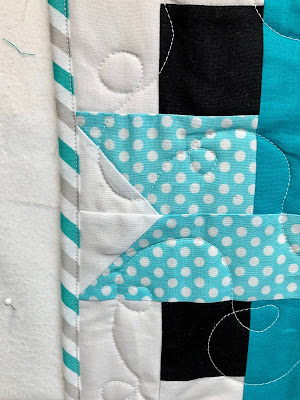 Well, I’m late getting this posted on this Saturday morning. My son Ryan came for dinner last night (DIL Kim is in South Carolina visiting Easton in the Navy). Between the snow shoveling yesterday, cleaning the house (sometimes it just *has* to be done) and fixing dinner, I guess I was more tired than I realized!
Linking up to Scrappy Saturday.
Posted by Cathy at 9:54 AM