Another week has flown by and all I have to show for it are a bunch of vegetables in the freezer (and in our tummies) and some quilt blocks. But it was really an interesting week.

The hot Labor Day long weekend (during which we had some family and grandkids visits) gave ‘way to cold temperatures on Tuesday and Wednesday. Our temperature variation wasn’t as drastic as Colorado’s, but we did go from mid-nineties (F) down to the low forties within 24 hours. Horrendous winds (up to 100 mph) on Tuesday left thousands without power in Salt Lake City and areas north. Hundreds of trees were torn from the ground and branches snapped. We had a little damage in our neighborhood (not us personally; thankfully we’d just had all the trees pruned), but Cousin Kim in SLC lost a huge tree and a major branch on her apricot tree. Her whole yard, front and back, was littered knee-deep in branches blown in from all over the neighborhood. We had friends without power for a couple days as well.

As scary as all that wind was, it’s nothing compared to what is happening in California, Oregon and the entire West with all the devastating fires. I grew up in Southern California and remember some scary fire seasons (1962 and 1977), and even remember, as a child, seeing the mountains north of us in the San Gabriel Valley - the foothill cities of Azusa, Monrovia, Arcadia, Sierra Madre and others - glowing red in the dark. Now some of those same areas are on fire again - and, unfortunately, many more. Those fires of decades past, however, were nothing compared to the devastation of 2018 and now 2020. Every year grows hotter and deadlier. Currently California is dealing with huge and deadly infernos, which include three of the four largest fires in California history. And prime fire season in Cali goes through October because of the warm autumns and the Santa Ana winds. My heart goes out to those who are dealing with the fires in the West, even if it is “only” the smoke and orange skies. Be safe, people, and know that the rest of us will do whatever we can to aid you in getting through this.

Ok, so after that, having a counter-ful of tomatoes to make into sauce seems like a breeze! I don’t have any pictures, but there was also a lot of yellow squash, spaghetti squash, green beens, carrots, onions and grapes to deal with. I think the neighbors draw the blinds when they see me coming, LOL. Seriously, I’m so glad that one of our neighbors has rabbits - because we grew enough carrots to feed all the humans AND rabbits on the block!

But there was plenty of sewing, too. It’s my sanity. I just dug into those red scraps and didn’t come up for air until I had made lots of progress this week. I’ll be linking up to Angela’s blog for the Rainbow Scrap Challenge’s Scrappy Saturday. 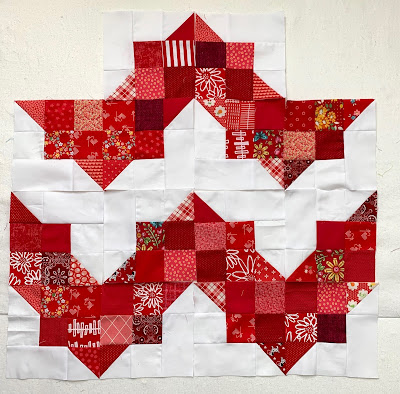 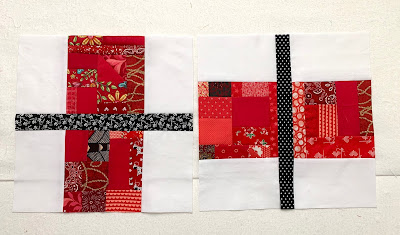 And one red Scrap Bucket: 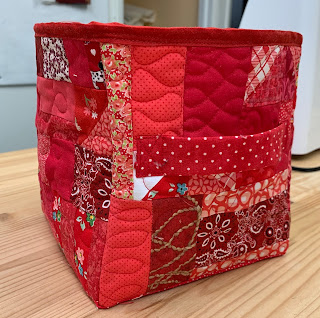 That was going to be all, but then I got going on my red strings and just couldn’t stop. 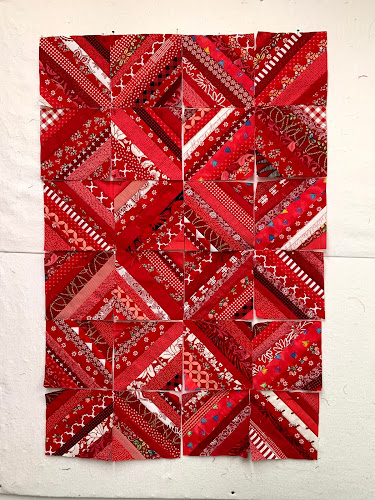 Twenty-four red string blocks at 6.5” (to finish at 6”). Some of these will probably get used in my red Creature Quilt (single-color quilt that I’ve been making every month). I don’t have that much red in my block orphanage, so this is what the makings of the Red Creature quilt is starting with: 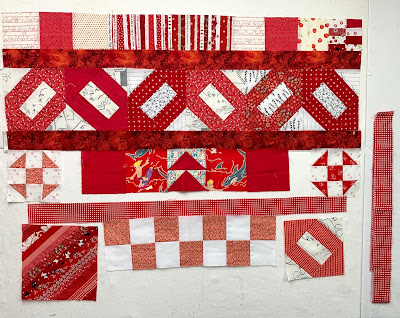 There’s an 8.5” string block from last year that may get cut down. We’ll see. I also have a few more scraps that I’ll be cutting into more 3.5” squares to take up some area. So with that, the additional string blocks and possibly some of the red selvage half hexie blocks, I should have enough to do a small donation quilt. I’ve got a couple weeks to work on it. I also have some red International Sister blocks to sew.
Darla wanted to help me with the red scraps, but she was too busy watching Kitten Academy on You Tube. We are really big fans of little Bessie, the wobbly kitten. Here’s Darla engrossed in the kitten tunnel antics. Notice that the tunnel is red! 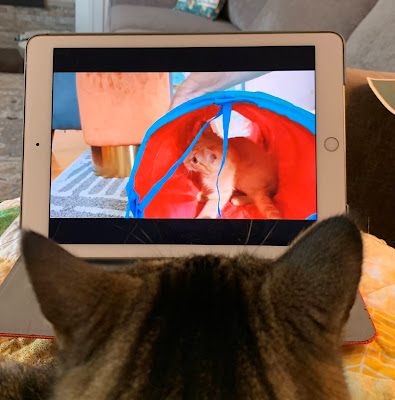 Finally, I didn’t forget my Tyrol blocks. I’ve been challenging myself to finish four of these every week so that once I get all 20 sewn, I can stitch up the flimsy (with sashing and cornerstones and borders) by month-end. Here are my four for this week. 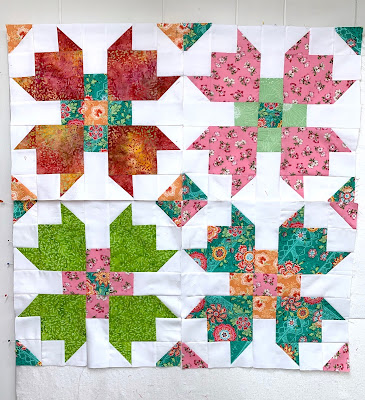 Yep, they’re starting to look like repeats because, well, that’s the idea. But I can prove to you that I’ve now sewn 12 of the 20 needed. 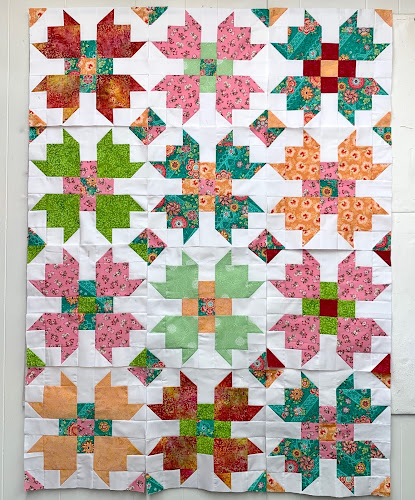 Of the remaining 8 blocks, all are repeats of the above colors with the exception of one block in dark pink.
We had a visit to the prosthetist for Bruce to get his arm adjusted. It sounds funny to say that, but most of you know by now that I mean his prosthetic arm. Tweaks and adjustments. It’s a process that will continue until his stump is done stabilizing (shrinking). And I got a fun fabric order from Connecting Threads for a quilt for my son Ryan for Christmas. I’ll show that in a couple months when I start on it - I have three other Christmas quilts to finish first.
This morning I’ll be preparing the meat and marinade for fajitas tonight. I also bought strawberries at the store yesterday so I can use them with the last of my frozen rhubarb chunks to make strawberry-rhubarb compote. We’ll have that with the fajitas tonight because the freezer is already filled with gobs (technical term) of compote. And I’ll also be prepping a batch of six Egg McMuffins (English muffins, Canadian bacon, eggs, cheese) to freeze for Bruce’s lunches as needed. I like having them on hand for him. And I’m getting a real hankering for baked apples and some zucchini bread so I’m sure they are in the weekend cooking forecast, too.  All that plus some sewing on Sunday should keep me out of trouble. Ha! We’ll see.
Posted by Cathy at 8:24 AM